Thomas Cook Bankruptcy: Everything you need to know

Thomas Cook Bankruptcy: Thomas Cook, the world’s oldest travel company,  has gone bankrupt, placing thousands of jobs around the world at risk. The collapse of the British travel giant has also left thousands of travelers stranded across Europe. The last-ever Thomas Cook flight landed at the Manchester Airport earlier today.

The 178-year-old travel company collapsed on September 23, 2019 after last-minute talks with the creditors to bail out the firm from its debt failed. As a result, the British Government was forced to hire chartered planes to bring back the travel company’s stranded customers from across the globe, in the largest peacetime repatriation effort in British history.

British PM Boris Johnson pledged to get all the stranded British travelers home free of cost. The Prime Minister also revealed that the government had rejected a request from Thomas Cook for a bailout fund worth 150 million pounds ($187.1 million).

Thomas Cook CEO Peter Fankhauser said that it was a matter of profound regret that the company had gone bankrupt after the failure of frantic last-minute bailout efforts. The company failed to secure a bailout package from its lenders over its talks that were held during the weekend. 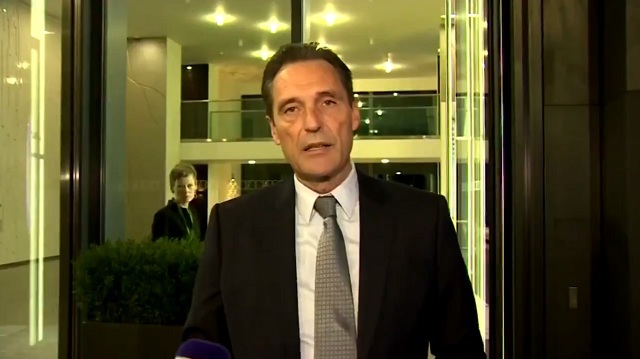 Fankhauser apologized to all the customers, thousands of employees of the airlines and its suppliers and partners. "I would like to apologise to our millions of customers, and thousands of employees, suppliers and partners who have supported us for many years. It is a matter of profound regret to me and the rest of the board that we were not successful,” said Fankhauser in a statement.

Thomas Cook was one of the world’s best and oldest travel companies, which was founded in 1841 by cabinet-maker Thomas Cook in Leicestershire, England.

The Thomas Cook Group included Thomas Cook airlines, which served leisure destinations across the world from its base at Manchester Airport and Gatwick Airport on a scheduled and charter basis. The airlines also operated services from eight other bases around the United Kingdom.

The Thomas Cook UK Plc and all associated UK entities entered into compulsory liquidation on September 23 and are now under the control of the Official Receiver due to failure in repayment of large amounts of debt.

The liquidation marks the end of one of Britain’s oldest companies that began functioning in 1841 and survived through two World Wars. The company used to run local rail excursions before the world war and pioneered package holidays and mass tourism. Overall, the travel giant ran hotels, resorts and airlines for 19 million people a year across 16 countries. It has currently left almost 600,000 people stranded abroad, forcing governments to coordinate a huge rescue operation, the largest peacetime rescue effort.

The collapse of Thomas Cook has now put 22,000 jobs at risk across the world, including 9,000 in the UK. The collapse has left over 150000 British citizens stranded abroad, triggering the largest-ever peacetime emergency rescue operation in British history. The number is almost twice the number of people who had to be repatriated when the British Monarch Airlines had collapsed in 2017.

The British Aviation Authority has been asked to launch a repatriation program to return the stranded British customers to the United Kingdom between September 23 and October 6. The operation will be carried out under the name 'Operation Matterhorn'.

The Civil Aviation Authority has secured a fleet of aircraft from around the world to bring the British passengers back home. To enable the smooth functioning of the rescue efforts, the aviation authority has launched a website (thomascook.caa.co.uk) with details about the repatriation flights. The stranded customers have been asked not to travel to airports until they have been informed through the website.

The British Transport Minister, Grant Shapps stated that the government has acquired planes from across the world to get the stranded British tourists home and call centres have been established to answer all the queries of the travelers.

Thomas Cook collapse: What led the company to collapse?

Several reasons have led to the collapse of one of the world’s oldest airlines, including online competition, debt pile, geo-political events and an ever-changing travel market situation.

The major heatwave in Europe in 2018 also reportedly inversely affected the company, with many customers cancelling their bookings at the last minute.

However, the group had almost secured a rescue deal with one of its biggest shareholders, China's Fosun and its banks in August 2019 by agreeing to the key terms of a 900 million pound recapitalisation plan.

While finalizing the final terms of the deal, however, the company was hit with a demand of  200 million pounds in underwritten funds by its banks. In its final talks over the weekend, the company failed to strike a rescue deal with its banks and bondholders. Fosun in a statement said that the recapitalisation plan that was almost agreed to earlier was no longer applicable given the compulsory liquidation of Thomas Cook. 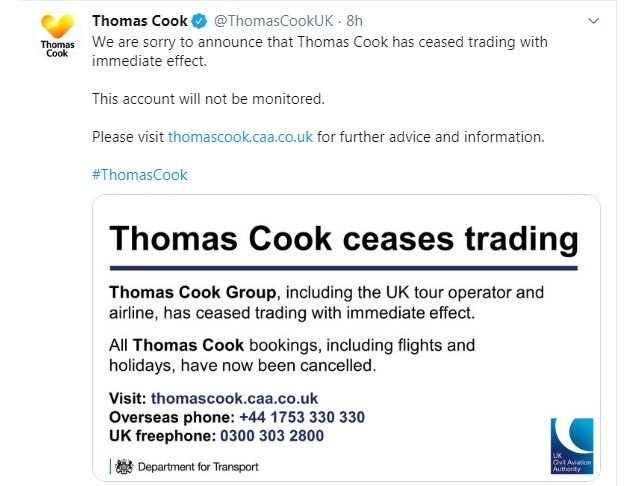 Thomas Cook collapse: How will it impact the travel industry?

Thomas Cook’s collapse can possibly create chaos across the world, with a lot of passengers stranded in hotels that have not been paid in locations.

In the longer context, the collapse could majorly affect the tourism sectors in the country’s major destinations such as Turkey and Spain. It could have a lasting impact on the fuel suppliers in the nations and force closure of many travel agents across Britain.

The collapse of Thomas Cook is also expected to have ripple effects in Asia, which shares of its shareholder Fosum Tourism already dropping by more than 5 percent in morning trade.

Will this impact Thomas Cook India?

Thomas Cook India has confirmed that it is not a part of Thomas Cook UK. The company confirmed on its official website that it is owned by a Canadian company, Fairfax Financial Holdings.

In a company statement, Thomas Cook India clarified that it is a completely different entity since August 2012, when 77 percent of the company was acquired by the Canadian multinational company, Fairfax. 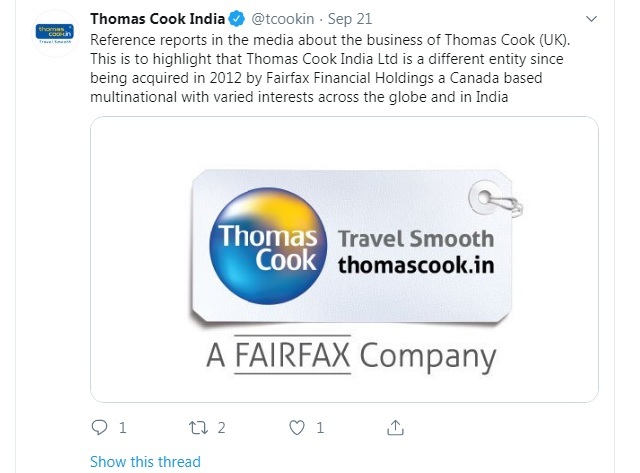 Thomas Cook India is one of the largest travel companies in the Asia Pacific region. It operates in 29 countries across the globe and offers services such as foreign exchange, corporate travel, leisure travel, MICE, insurance, visa, passport and e-business.

The bankruptcy and sudden closure of Thomas Cook UK thus, will not have any impact on Thomas Cook India.