The three-judge panel will conduct an in-camera proceeding. It is expected to hear the complainant in person and analyze the evidence put forward by her. 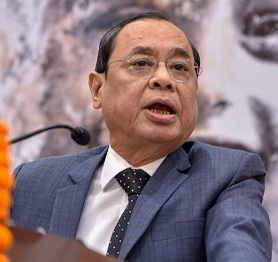 The Supreme Court on April 23, 2019 constituted a three-judge panel headed by Justice SA Bobde, the senior-most judge in apex court after the Chief Justice of India (CJI), to inquire into the sexual harassment complaint by a former junior court assistant against CJI Ranjan Gogoi.

Besides Justice SA Bobde, the inquiry panel comprises Justice NV Ramana, the next senior most judge, and Justice Indira Banerjee, who was elevated to the Supreme Court on August 7, 2018.

• Following its constitution, the inquiry committee issued notices to the complainant and SC secretary general Sanjeev Kalgaonkar and asked them to be present during the first hearing of the complaint, which is scheduled for April 26.

• The panel would be conducting an in-camera proceeding. It is expected to hear the complainant in person and analyze the evidence put forward by her.

• The panel has asked SC secretary general Kalgaonkar to come with all records relating to the dismissed woman employee and her places of posting during her four-year employment in the apex court.

• It will then seek the version of the CJI against whom the allegation is made and then come to its conclusion. The panel can even appoint a lawyer to assist them.

• This is the first in-house inquiry on a sexual harassment complaint conducted in the Supreme Court and it is the first-ever time ever such an inquiry is being conducted against the CJI.

The three-judge panel was set up after a full court meeting unanimously agreed that it was necessary to clear the air after the controversy over the sexual harassment complaint.

This will be the first time in the 69-year-old history of the Supreme Court that a sexual harassment complaint against the head of the judiciary would be inquired into by a panel of three SC judges.

The in-house inquiry procedure for judges provides for inquiry against judges of SC and HCs but not against the CJI.

The CJI had on April 20 entrusted Justice Bobde with the task of taking decisions relating to the sexual harassment complaint. Justice Bobde is next in seniority to the CJI and is scheduled to succeed him on November 18, 2019.

With the first hearing of the case scheduled for April 26, the inquiry committee is expected to complete its task before the court closes for summer vacations on May 10.

The Union Government on April 23, 2019 extended the ban on import of milk and its products, including chocolates, from China till laboratories at ports for testing the presence of toxic chemical melamine are upgraded.

The Directorate General of Foreign Trade said in a notification that the prohibition on import of milk, milk products including chocolates, chocolate products, candies, confectionary and food preparations with milk or milk solids as an ingredient from China is extended until the capacity of all laboratories at ports of entry have been suitably upgraded for testing melamine.

• The ban was imposed after apprehensions arose on the presence of melamine in some of the milk consignments from China. Melamine is a toxic chemical used for making plastics and fertilisers.

• Although India does not import milk or milk products from China, it imposed the ban as a preventive measure.

• The extension of the ban was recommended by Food regulator FSSAI until all labs at ports are modernised to test the chemical.

• However, it has not mentioned any timeline for upgradation of that capacity of all laboratories.

The ban was first imposed in September 2008 and extended subsequently from time to time. The latest ban imposed by the government ended on April 23.

India is the world's largest producer and consumer of milk. It produces around 150 million tonne milk annually.

Among the Indian states, Uttar Pradesh leads in milk production followed by Rajasthan and Gujarat.