Jagran Josh presents Top-15 Science and Technology current affairs topics of the year 2019. This information is useful for the students preparing for the various government exams. 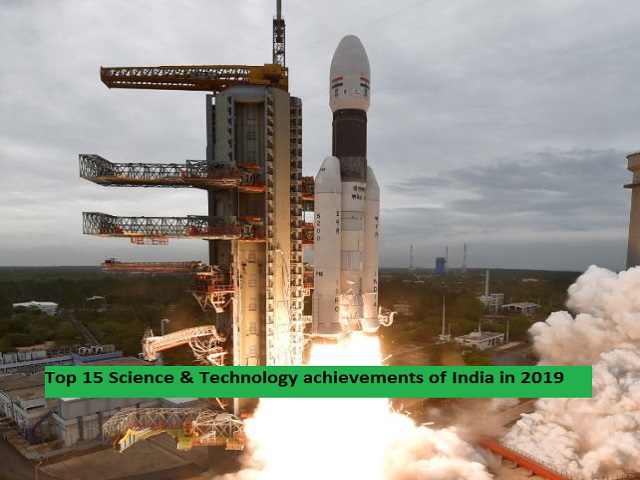 Jagran Josh presents the top 15 Science and Technology current affairs events of the last year. This information is useful for the examination and is beneficial for the students preparing for the various government exams.

Indian Space Research Organization (ISRO) launched Cartosat-3 satellite on 27 November 2019. The Cartosat-3 satellite was launched with help of PSLV-C47 from the Satish Dhawan Space Center in Sriharikota. PSLV-C47 was also carrying 13 American satellites to space. ISRO has created history for with launching of this satellite as it is capable to take closest photographs of any object from the space.

Cartosat-3 is equipped with high-resolution imaging capacity. Cartosat-3 is a remote sensing or earth observational satellite. This satellite will also help in monitoring India's borders and natural disasters. It will be placed in an orbit of 509 km at an inclination of 97.5 degrees.

2.Chandrayaan-2: Vikram couldn’t land on the Moon but found unbroken

The Chandrayaan-2 orbiter found lying tilted on the surface of the Moon. Vikram Lander was crashed on the surface of the Moon about 500 meters away from its planned landing site. According to the Indian Space Research Organization (ISRO), the lander 'Vikram' was moving towards the south pole of the moon and was just a few seconds away from touching its surface when it lost contact with the ground when it was 2.1 km above the Moon.

Chandrayaan-2's orbiter was placed about 100 km above the moon. The orbiter has eight payloads, three landers and two rovers. The orbiter will keep circling the moon for a year. It will also take thermal images of the moon with the help of a high-resolution camera and will send it to ISRO's mission control room on earth.

3.Gaganyaan Mission: Potential astronauts to get training in Russia

Indian Space Research Organization (ISRO) is gearing up for Gaganyaan Mission after Chandrayaan-2. ISRO has been engaged in preparations on a war footing note for its ambitious mission Gaganyaan. This will be the first manned space mission of ISRO which is proposed to be launched by 2022.

The age limit for the selection of astronauts for Mission Gaganyaan was set at 30 years, but no one from this age group could clear the preliminary examination. After that, the age limit was increased to 41 years. At present, life support system, health monitoring system and aircraft support system are being finalized in the spacecraft. In 2018, Prime Minister Narendra Modi announced about the Mission Gaganyaan from the ramparts of the Red Fort.

The central government has recently sanctioned Rs. 9.3 cr for conducting studies to review microbial diversity along the entire length of the Ganges. Researchers believe the 2,500-kilometre-long river stretch contains germs that can promote 'antibiotic resistance'.'

The objective of this study is to recognize ‘threats to human life’ from antibiotic resistance. The study will also try to find out sources of various kinds of bacteria present in the guts of animals which is called Escherichia Coli.

The newly defined unit has come into force on 20 May 2019 i.e. World Metrology Day (WMD). World Metrology Day is celebrated on this same day as the Meter Convention was signed on 20 May 1875 by representatives of seventeen countries. These new definitions will not put any effect on the general public but it will affect scientific experiments.

It will help in critical satellite navigation services, Indian manned space flight program and data relay communication-related satellites in relation to the next Mars mission. This will also ensure to continue production at the domestic level. The GSLV continuation program was approved in 2003 and two phases have been completed. The third phase is in progress and expected to be completed in the fourth quarter of 2020-21.

Scientists have discovered that when excessive pressure and temperature are applied to potassium, it can create a state in which most atoms form a lattice structure but a second set is in a fluid arrangement. Scientists said that it would be like one is holding a sponge which is filled with water; also, the sponge is made of water.

The Indian Space Research Organization (ISRO) has started a special program called "Young Scientist Program" (Yuvika) for school children from this year. The objective of this program is mainly to impart basic knowledge on space technology, space science and space applications to the youth with the intention of arousing their interest in the emerging fields of space activities.

The selection of children will be done on the basis of their educational performance and non-academic activities. Selection of children from rural areas will be preferred in this program. ISRO Chairman K Sivan said, "Students will be taken to the ISRO and Bengaluru facility centres. Apart from this, they will also be taken to the launch centre and lab of Sriharikota. Students will also be given the opportunity to make small satellites.

Indian Space Research Organization (ISRO) successfully launched its 40th communication satellite GSAT-31 from the Space Center of French Guiana on February 5, 2019. According to the information released by ISRO, the age of the satellite is 15 years. This satellite will help in operational services for some satellites inside the orbit and increase the capacity of Ku-band transponders in geostationary orbit.

The satellite weighing 2,535 kg was launched from Kourou Launch Base in Guiana Space Center (CSG)  via rocket Ariane-5 (VA 247). GSAT-31 will be used in VSAT networks, television uplinks, digital satellite news gathering, DTH television services, and cellular back hall connectivity and among other services.

Human Space Flight Centre (HSFC) was inaugurated at Bangalore. S. Unnikrishnan is the founder-director of HSFC. Union Cabinet has already approved a budget of Rs. 9023 cr for this project. This centre will be responsible for the implementation of Gaganyaan project.

Indian Space Research Organisation (ISRO) has placed the world's lightest satellite – Kalam SAT V2 in the Earth's orbit. Along with this, the imaging satellite Microsat-R has also been sent into space. Both these satellites were launched through PSLV 44 launch vehicle from Satish Dhawan Space Center in Sriharikota.

DD Science will air on DD National from Monday to Saturday from 5 pm-6 pm. It can be watched every day for one hour. India Science is an online channel. It is easily viewable on all Internet-enabled devices. The special thing is that it offers live, schedule play and video-on-demand science programming.

The DD Science and India Science channels will feature science-based documentaries, studio-based discussions, and virtual walk-through of scientific institutions, interviews and short films. Both these channels will help people to understand the benefits of science.

India successfully test-fired a short-range air-to-air missile Astra. The range of this missile is 25 to 40 km. The weapon was tested using a booster engine. The missile was developed by the Defense Research Development Organization (DRDO).

The missile was developed keeping in mind the three-tier defence system for metropolitan cities after the 9/11 terrorist attacks on America. India has now developed a state-of-the-art short-ranged missile after Russia and USA.