The Supreme Court of India questioned the state governments on the lack of separate schools and trained teachers for students who suffer from autism, blindness and deafness. 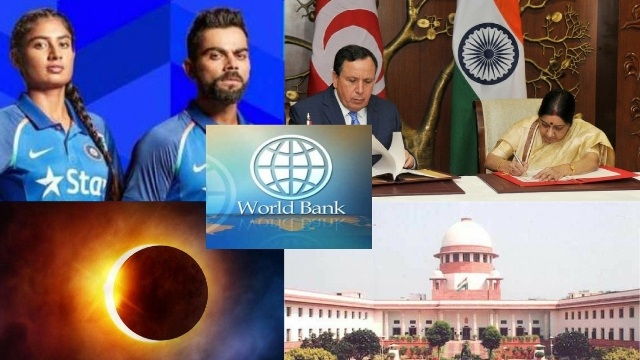 The Supreme Court of India on 31 October 2017 questioned the state governments on the lack of separate schools and trained teachers for students who suffer from autism, blindness and deafness.

A bench comprising Chief Justice Dipak Misra, Justices A M Khanwilkar and D Y Chandrachud argued that access to education is a fundamental right under Article 21A and it is the responsibility of the States to provide education under the Rights of Children to Free and Compulsary Education Act, 2009.

India and Tunisia on 30 October 2017 jointly agreed to enhance cooperation in various sectors including in the fields of renewable energy, infrastructure, transport and automobiles, textiles, agriculture, drugs & pharmaceuticals, healthcare, ICT, SMEs and energy.

The agreements were signed during the 12th Session of the India-Tunisia Joint Commission, which was held in New Delhi on 30 October. While External Affairs minister Sushma Swaraj led the Indian delegation at the meeting, the Tunisian delegation was headed by Khemaies Jhinaoui, Minister of Foreign Affairs of Tunisia.

Indian captain Virat Kohli reclaimed the top spot of the ICC ODI rankings for batsmen with 889 rating points. Kohli had lost the top spot 10 days ago to South African batsman AB de Villiers. However, Kohli, who scored 263 runs in the New Zealand series and earned 889 rating points, which is the best ever by an Indian batsman. Mithali Raj was ranked number with 753 rating points.

Cambridge University researchers have discovered that the oldest recorded solar eclipse occurred on 30 October 1207 BC, as mentioned in the Bible. The findings were published in the journal Astronomy & Geophysics on 1 October 2017.

This solar eclipse has its reference in the biblical text from the Old Testament book of Joshua. The eclipse occurred after Joshua led the people of Israel into Canaan, a region that covered modern-day Israel and Palestine. Occurred around 3200 years ago, this solar eclipse helped historians to date Egyptian pharaohs, the monarchs of ancient Egypt.

India and the World Bank on 30 October 2017 signed USD 200 million loan agreement for the Assam Agribusiness and Rural Transformation Project. The loan will have a 7 year grace period and a maturity of 16.5 years.

The project is aimed at supporting Assam to facilitate agri-business investments, increase agriculture productivity and market access. It will enable small farm holders in producing crops that are resilient to recurrent floods or droughts in the state.