Prime Minister Narendra Modi launched an intensive immunisation drive at Vadnagar in Gujarat on 8 October 2017.The campaign called the Intensified Mission Indradhanush (IMI), aims to reach every child below the age of two years and pregnant women still uncovered under the routine immunisation programme. 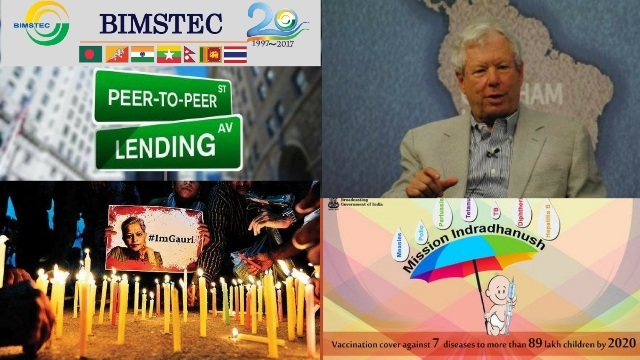 The campaign called the Intensified Mission Indradhanush (IMI), aims to reach every child below the age of two years and pregnant women still uncovered under the routine immunisation programme. The main objective behind this mission is to ensure no child suffers from any vaccine- preventable disease.

Under the mission, a 7-day immunisation drive will be conducted each month starting immediately till January 2018 in 173 districts and 17 cities.

The first BIMSTEC Disaster Management Exercise 2017 (BIMSTEC DMEx-2017) will be conducted by the National Disaster Response Force (NDRF) as the lead agency from 10 October to 13 October 2017.

The Exercise will be conducted in the National Capital Region (NCR). It will serve as a platform for sharing best practices on all aspects of Disaster Risk Reduction (DRR), strengthening regional response and coordination for Disaster Management among the BIMSTEC member countries.

According to the new guidelines, no NBFC can start or carry on the business of a P2P lending platform without attaining a Certificate of Registration from now onwards. Every company/ firms looking for registration with the bank as an NBFC-P2P need to have net owned funds of not less than 20 million rupees or such higher amount as the RBI may specify.

Gauri Lankesh, activist-journalist from Karnataka, who was shot dead in September 2017, will be posthumously conferred the Reach All Women in WAR (RAW in WAR) Anna Politkovskaya Award 2017.

With this, the journalist becomes the first-ever Indian to receive the honour. She would be sharing the award with a Pakistani peace activist, Gulalai Ismail, who has faced death threats for speaking out against the Taliban.

Richard H. Thaler from University of Chicago has been awarded the 2017 Nobel Prize in Economics for his contributions to Behavioral Economics.

Richard Thaler has integrated psychologically realistic assumptions into analyses of economic decision-making. His pioneer work to bridge the gap between economics and psychology won him the Nobel Economics Prize.