The two organisations will be working together by undertaking various initiatives aimed to improve the livelihoods of tribal people. 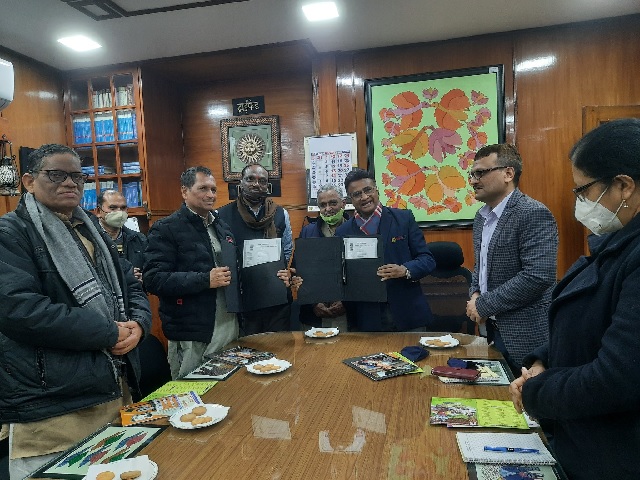 MoU for Empowerment of Tribals

The Tribal Co-operative Marketing Development Federation of India- TRIFED signed a Memorandum of Understanding with Akhil Bhartiya Vanvasi Kalyan Kendra on January 3, 2021, to set up TRIFOOD Parks in 5 districts in Madhya Pradesh.

The memorandum was signed between Shri Pravir Krishna, MD of TRIFED, and the General Secretary of Akhil Bhartiya Vanvasi Ashram, Shri Yogesh Bapat in the presence of Shri Durga Das Uikey, Member of Parliament from Betul, MP.

TRIFED is a cooperative body that comes under the Ministry of Tribal Affairs and works towards improving the livelihood of tribals and their empowerment. While on the other hand, Akhil Bhartiya Vanvasi Kalyan Kendra has been known for working for the welfare of tribals in Chhattisgarh, Jharkhand, and MP since 1952.

A #MoU was signed & exchanged between #TRIFED and @VanKalyanAshram on January 3, 2021 to work together for setting up of TRIFOOD Parks in 5 districts in #MadhyaPradesh. It was signed by @Pra87, MD, TRIFED and Shri Yogesh Bapat, General Secretary. pic.twitter.com/Ri1C6zyeY6

They are food processing centres that aim at promoting value addition to the minor forest produce. TRIFOOD Parks was launched in 2020 under Van Dhan Yojana. The parks set up by the government procure raw materials from the Van Dhan Kendras and process them so they can be sold across the country through the outlets of Tribes India.

MoU signed to improve the livelihoods of tribal people:

•  The two organisations will be working together by undertaking various initiatives aimed to improve the livelihoods of tribal people and for the implementation of the Van Dhan Yojana by mobilizing Self Help Groups/VPCs/Van Dhan Vikas Kendra/ TRIFOOD Parks.

•  It has also been agreed, with TRIFED as the mentoring organization, Vanvasi Kalyan Ashram will form new Van Dhan Kendras in the tribal areas by building infrastructure, identifying SHGs, organize training, providing equipment and machinery as well as other support.

•  Kalyan Ashram will also include other areas, among other scopes of activities, such as floriculture, agriculture, horticulture, animal husbandry, fisheries, crafts, handlooms, to keep the operations running all year and to make Van Dhan Scheme all viable and inclusive.

Collaboration for the upliftment of Tribals:

The Tribal Co-operative Marketing Development Federation of India- TRIFED has been exploring collaborations with various like-minded organsiations for continuing their mission of improving tribal livelihoods.

The latest engagement with Akhil Bhartiya Vanvasi Kalyan Ashram to execute meaningful work will ensure that there is an income-earning opportunity for tribals all the year. It will happen by engaging tribals into a variety of economic opportunities and activities ranging from horticulture, agriculture, Medicinal, and Aromatic Plants, floriculture, etc., and to go beyond Minor Forest Produces.