Trump peace plan: Under the vision, Jerusalem will remain Israel’s undivided capital and the Palestinian territory will be doubled. 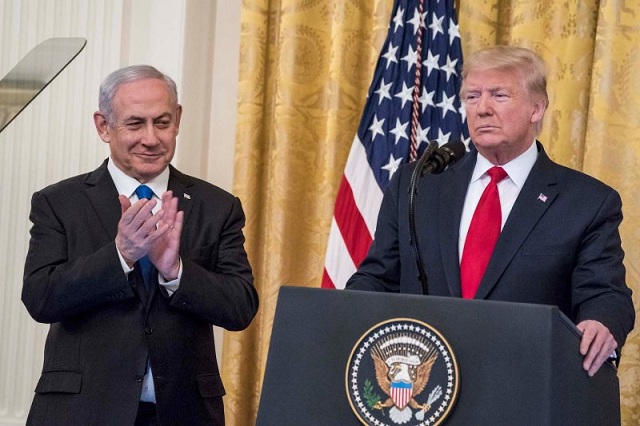 Trump credited Prime Minister of Israel and main opposition leader Benny Gantz of the Blue and White Party for supporting his new vision, proving that the state of Israel is looking to establish peace.

Speaking about his peace plan, Trump said that forging peace between the Israelis and Palestinians is maybe the most difficult challenge. He said that though all previous administrations have attempted to do so but they bitterly failed in their efforts. He recalled how the process has been extremely long and arduous.

Trump had delivered his vision for peace, prosperity and a brighter future for Israelis and Palestinians to Israeli Prime Minister Benjamin Netanyahu on January 26, 2020. Trump’s vision for peace is fundamentally different from past proposals. In contrast to past proposals that were light on factual details and heavy on conceptual frameworks, the new plan comprises 80 pages and is the most detailed proposal ever put forward by far. It provides precise solutions to make Israelis, Palestinians and the region safer and much more prosperous.

Trump described his vision to be a win-win opportunity for both sides, a realistic two-state solution that resolves the risk of Palestinian statehood to Israel’s security. Trump said that Israeli PM Netanyahu has expressed his willingness to endorse the vision as the basis for direct negotiations with the Palestinians.

• A joint committee will be formed with Israel to convert the conceptual map into a more detailed one.

• The vision recognises Jerusalem as Israel’s undivided capital. It also states that the United States will recognize Israeli sovereignty over the territory that the vision provides to be a part of Israel.

• The proposed transition to a two-state solution will be undertaken on one condition that it will not present any security risk to Israel. No acts of terror will be allowed.

• The new map will more than double the Palestinian territory and provide a Palestinian capital in eastern Jerusalem where the US will open an embassy.

• No Israeli or Palestinian will be uprooted from their homes. Israel will work closely with the King of Jordan to ensure that the Temple Mount is preserved and strong measures will be taken to ensure that all Muslims who wish to pray peacefully at the Al-Aqsa Mosque in Jerusalem are allowed to do so.

• The peace vision also promises the delivery of a massive commercial investment worth 50 billion dollars into the new Palestinian state.

• The vision gives the Palestinians four years to study the deal, negotiate with Israel and achieve the criteria of statehood and become a truly independent state. During this time, the territory allocated for the new state will remain open and undeveloped. 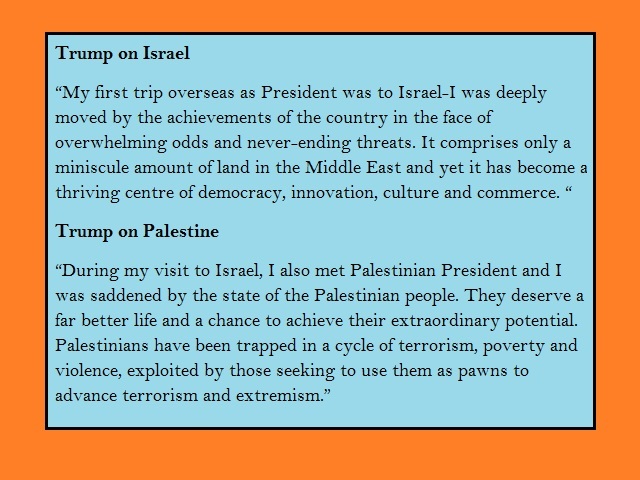 The United States has in the past shown its strong support to Israel by moving the US embassy to Jerusalem, recognizing the Golan Heights and withdrawing from the 2015 Iran nuclear deal. The US President hence felt that it was reasonable to extend similar support to the Palestinians or it wouldn’t be fair.

President Donald Trump believes that his vision will provide a historic opportunity to the Palestinians to achieve an independent state of their own. He reiterated how the Palestinian people have grown distrustful after years of unfulfilled promises but they are ready to escape their tragic past and realise a great destiny.

Trump stated that if the vision is executed well, then within the next 10 years, around 1 million new jobs will be created in Palestine, their poverty rate will be cut in half and their GDP will double. The vision is expected to end the cycle of Palestinian dependency on charity and foreign aid.