India's reply at UNHRC: India strongly rebutted Pakistan's claims by saying, "silence only emboldens terrorists and Pakistan is the epicentre of global terrorism."

India's reply at UNHRC:  India hit out at Pakistan at the UNHRC with a short yet crisp statement. India clarified in clear terms that sovereign decisions like J&K legislation is entirely internal to India and it will not accept interference in its internal affairs. India strongly rebutted Pakistan's claims by saying, "silence only emboldens terrorists and Pakistan is the epicentre of global terrorism."

India stated that those who are misusing this platform for malicious political agendas under the garb of human rights should be called out. India stated countries (Pakistan) cry victim when they actually are the perpetrators.

India further pointed out without naming Pakistan, that the world is aware of the fabricated narrative that comes from the epicentre of terrorism, which has given shelter to ring leaders for years. India strongly put forward how Pakistan conducts cross-border terrorism as a form of alternate diplomacy. 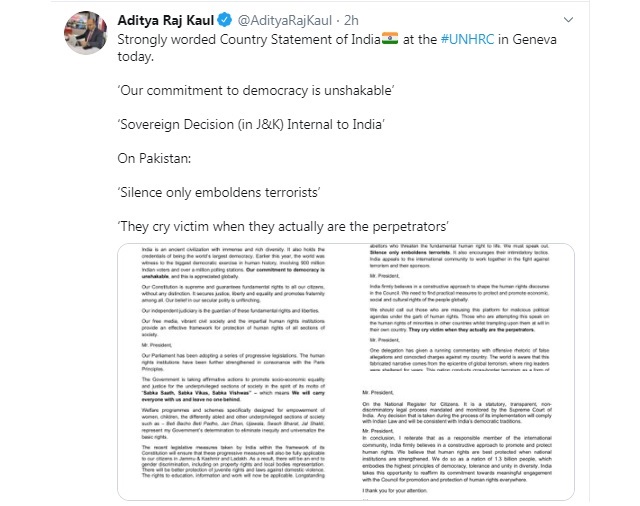 India's reply to Pakistan came after the United Nations Human Rights Council (UNHRC) urged India on September 10, 2019 to end the lockdown and curfew in Kashmir and restore basic communications services. UN High Commissioner for Human Rights Michelle Bachelet said that she was "deeply concerned" about the Indian government's actions in Kashmir and called for an end to the lockdown and communication blockage.

Bachelet expressed deep concern about the impact of Indian government’s actions on the human rights of Kashmiris, including imposition of communication restrictions, restrictions on peaceful assembly and detention of local political leaders and activists.

Michelle Bachelet asked both India and Pakistan to uphold the rights of Kashmiris. She stated that her office has received reports on the human rights situation on both sides of the LoC after India revoked Article 370 of its Constitution and withdrew the special status given to Jammu and Kashmir and divided it into two Union Territories.

The UN High Commissioner for Human Rights further said that it was important that the people of Kashmir are engaged in any decision-making processes that will have an impact on their future.

The UN High Commissioner for Human Rights Michelle Bachelet also brought up Assam NRC and expressed concern for the lakhs of people who have been excluded from the citizen's list. Bachelet said that the recent NRC verification process in Assam has caused great uncertainty and anxiety. Almost 1.9 million people were excluded from the final NRC list, which was published on August 31. Bachelet appealed to India to ensure people are protected from statelessness.

India reiterated that withdrawing of Article 370 was its internal matter and strongly criticised Pakistan for making "irresponsible statements" and provocative anti-India rhetoric over its internal matters. India stated that legislative measures taken by the government will ensure that progressive welfare programmes and schemes of the government such as Beti Bachao Beti Padhao, Jan Dhan, Ujawala Yojana, Swachh Bharat and Jal Shakti will also be fully applicable to the citizens of Jammu & Kashmir and Ladakh.

On NRC, India stated that updating of NRC is a transparent, statutory and legal process mandated and monitored by the Supreme Court. India stated that any decision taken during the process of its implementation will be in line with the Indian law and India's democratic traditions. India also maintained that the exclusion from NRC has no implication on the rights of an individual resident in Assam.

The External Affairs Ministry had also cleared in a statement last week that “those who are not in the final list will not be detained and will continue to enjoy all the rights like they did before until they have exhausted all the possible remedies available under the law. It does not make the excluded person "Stateless'.” India clarified that this does not make the person a ‘foreigner’ and they will not be deprived of any rights or entitlements which they have enjoyed before.