The US President and PM Modi discussed the G7 expansion and other issues during their 40-minute call including India-China border standoff and reforms of the World Health Organisation. 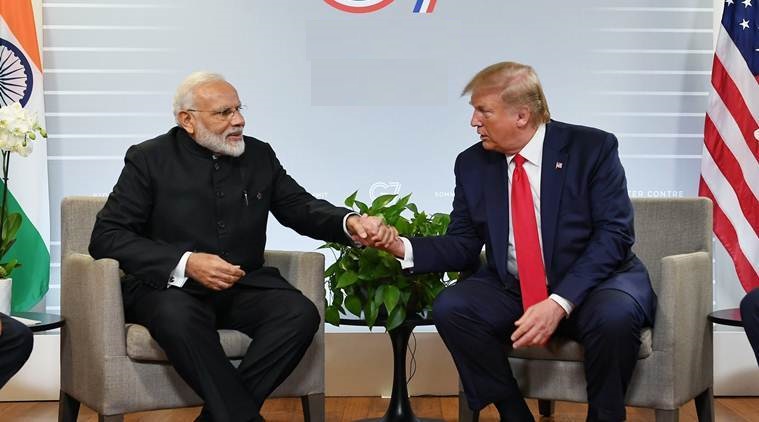 US President Donald Trump invited Prime Minister Narendra Modi to attend the next G7 meeting during their telephonic conversation on June 2, 2020.

PM Modi tweeted after his talk with Trump saying that he had a warm and productive conversation with my friend President. He said that they discussed Trump’s plans for the US Presidency of G-7, the COVID-19 pandemic and many other issue.

The richness and depth of India-US consultations will remain an important pillar of the post-COVID global architecture.

This announcement comes a day after the US President discussed plans of expanding the Group of 7 with his Russian counterpart Vladimir Putin over the phone to include more diverse countries such as India and Russia to better represent the global response to the COVID-19 pandemic.

The 46th G7 summit, which was earlier supposed to be held at Camp David in the United States from June 10-12, has been postponed by US President Trump to September 2020.

• The US President and Indian Prime Minister discussed the G7 expansion and other issues during their 40-minute call including India-China border standoff and reforms of the World Health Organisation.

• PM Modi commended President Trump for his far-sighted approach as far as G7 expansion was concerned, acknowledging that an expanded forum would be in keeping with the emerging realities of the post-COVID world. The Indian Prime Minister said India would be happy to work with the US and other countries to ensure the success of the proposed Summit.

• The two leaders reportedly discussed the India-China border stand-off and shared their perceptions about the standoff, which was triggered last month after China’s People’s Liberation Army activated the Line of Actual Control at Naku La area in north Sikkim and at three points in Galwan and one point at Pangong Tso in Ladakh sector.

• The leaders also discussed their view on the reforms at the World Health Organisation. Both leaders have been supporting the push for reforms in the WHO but have chosen different approaches to relay the same.

• While PM Modi has decided to push hard on reforms while staying as a part of the WHO, US President pushed for reforms by terminating the US’s relationship with the world health body.

• Prime Minister Narendra Modi also expressed concern regarding the ongoing protests in the US over the death of African-American George Floyd in police custody. He also conveyed his best wishes for an early resolution of the situation/

US President Donald Trump during his latest phone call with Russian President Vladimir Putin had discussed plans to expand the Group of 7 to again include Russia and other nations such as India, South Korea and Australia. India is a member of G-20, which is a larger version of the body.

The Group of Seven presently comprises the world’s most advanced economies including the United States, United Kingdom, France, Germany, Japan, Canada and Italy. The US President described the G7 as outdated and advocated it to be rechristened into G10 or G11.

Why Trump’s plan to expand G7 is controversial?

Trump’s plan to expand the G7 to include Russia, India, Australia and South Korea is controversial as, which was earlier a part of the group, was removed from it after it annexed Crimea in Ukraine in 2014.

Russia had been formally inducted as a member in the group in 1998, with which G7 became G8. However, Russia’s act of moving its troops into eastern Ukraine and conquering Crimea in 2014 drew heavy criticism from the other G8 nations, which then decided to suspend Russia from the group.

PM Narendra Modi had participated in the 45th G7 Summit as well, which had taken place in August 2019 at Biarritz, France. India had been specially invited as a "Biarritz partner country” for the 45th G7 summit by French President Emmanuel Macro along with other nations including Australia, Chile, South Africa, Rwanda, Senegal, Egypt and Burkina Faso.

India had attended the G7 summit in 2019 after a gap of almost 10 years. The last time India attended the summit was in 2005, when PM Manmohan Singh had represented India at the summit on the invitation of the then British Prime Minister Tony Blair.