Who funds WHO? Decoding impact of US Prez Trump’s decision to halt World Health Organization funding amid COVID-19 pandemic

US halts WHO Funding: US President Donald Trump recently announced his decision to halt funding to the global health agency World Health Organization. To evaluate the impact of this decision, we first need to decode how is WHO funded? Let’s find out!

US halts WHO Funding: Recently, the United States of America decided to cut-off funding to the World Health Organization. The US is the the biggest overall donor to the global health agency, and contributes about 15% of the total budget of the WHO. US President Donald Trump has accused WHO of ‘covering up’ the virus spread for his decision. On the other hand global agencies including the UN and EU have condemned the US decision as it would severely hamper the agency’s ability to manage the on-going pandemic.

But before jumping to any conclusions it is important to understand where does WHO get its money from and how is it used to counter global health threats? Let’s find out.

Rational Behind US Decision

US President Donald Trump recently announced his decision to halt funding to the global health agency World Health Organization. While announcing the decision, Trump administration has alleged that the global health agency of being unduly ‘China Centric’ during the Coronavirus pandemic and also accused it of covering up the spread of the virus during the initial days which led to the pandemic. He also added that “WHO" didn’t perform its basic duty of safeguarding the health of the people of the world and therefore must be held accountable. Trump also hit out at China saying that WHO supported ‘China's disinformation campaign’ on Coronavirus which led to the global outbreak. The decision comes after Trump administration gave wielded threat do ‘cut-off WHO funding’ for nearly a week.

The decision has received global condemnation starting from WHO’s parent agency the United Nations and even European Union also criticizing the US decision amid the on-going pandemic. Amid rising concern about US decision to halt WHO finding, United Nations Secretary-General Antonio Guterres issued a statement saying “This is "not the time" to reduce resources for WHO operations. He called upon the ‘international community to show unity and solidarity and to work together to stop the virus to avoid shattering consequences’. On similar lines, EU foreign policy chief Josep Borrell also condemned the decision and termed the global on-going health crisis that transcends borders.

Now that we are aware of the current issue with regards to WHO Funding, before diving deeper into it, it is important for us to understand what the organization is and why was it incepted in the first place.

What is World Health Organization (WHO)

World Health Organization was established in 1948 under the aegis of the United Nations. The agency was seen as a necessary tool to organize, co-ordinate and streamline global efforts on health front. One of the key responsibilities of the World Health Organization (WHO) is to develop international health policy, especially on contagious disease such as COVID-19. The agency is also empowered by several UN resolutions to issue advisories and take necessary actions against member state to curb spread of diseases and protect health of the people of the world.

Currently, WHO has 194 member states, the group of which India and US are both part of. The global health agency is run and managed by World Health Assembly that comprises of delegates from these 194 member nations. Typically, countries nominate their health experts and leaders to be part of the World Health Assembly. This assembly also selects the leadership team for Who including the director general as well as sets the agenda and priorities. It also looks into budgetary allocations and reviews progress of the on-going projects.

Success and Achievements of WHO

The recent global outbreak of COVID-19 has brought to the fore long forgotten debate about the utility and need of a global health watchdog. However, WHO cannot be discounted as a ‘paper tiger’ when it comes to global healthcare and health emergencies. The health agency has been at the forefront in the fight against many health hazards including the recent outbreak of SARS, MERS and Ebola. In the past, WHO’s continued efforts have also helped eradicate smallpox and also reduced polio cases by 99% across the world.

Where does WHO Get money?

Now, coming to the million dollar question, quite literally! Where does WHO get its funding from? The simple answer to this is through contributions and donations. However, upon closer inspection, WHO funding is quite complicated and needs a thorough understanding. 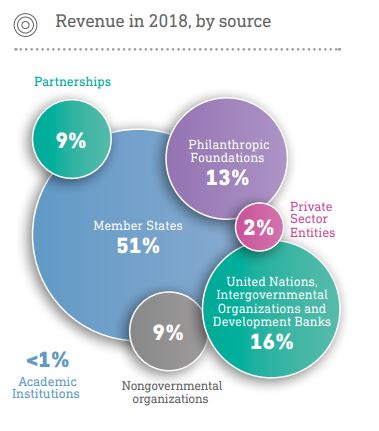 As per its website, there are four primary sources of money or funds for the World Health Organization i.e. 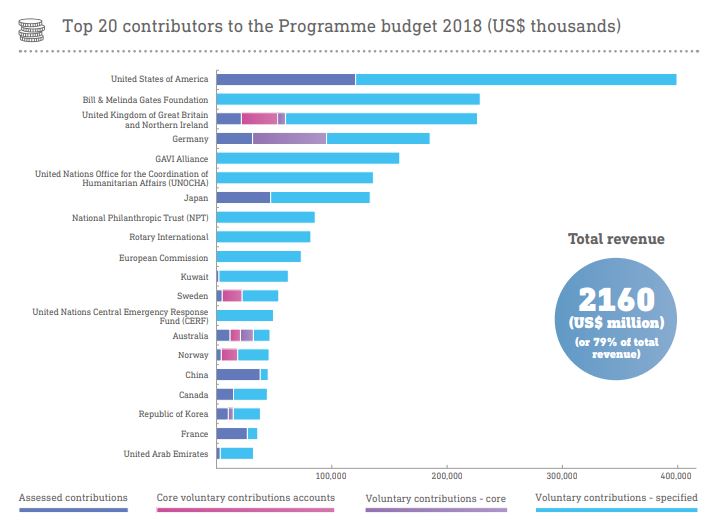 Impact of US Decision to halt WHO funding amid pandemic

But, as reported earlier, the United States is the largest donor to the WHO and account for nearly 14.67% of all voluntary contributions given globally. US is followed by ‘Bill and Melinda Gates Foundation’ – a foundation run by Microsoft founder Bill Gates and his Wife. If we look at the next biggest country / member state contributor to WHO, it is United Kingdom USD 434.8 million in dues and donations followed by Germany. On the other hand, China – which has been the epicentre of the global pandemic, contributes about USD 85 Million in total to WHO.

Trying to assess the immediate impact of US’s decision to cut-off funding to the World Health Organization will be difficult, as many other details are still awaited from US’s side. As of now Trump administration has not specified from which pool will it be reducing its contribution from i.e. either from Assessed Contributions or membership dues which currently stand at USD 236 Million or from Voluntary donations which are about USD 656 Million. But irrespective of its nature, the funding cut to the WHO will surely hamper the global health agency’s ability and efficacy in handling the on-going contribution.

Why WHO Funding is such a major issue?

All global agencies, including the United Nations and World Health Organization, have come under criticism, multiple times, from several member states for being one sided or taking side of major contributors. This is currently true for WHO as well. In fact, during the Cold War, Russia and its allies pulled out of the WHO accusing it of being partisan and taking undue side of the United States, as it was the biggest contributor since then. The recent scepticism expressed by the Trump administration is also a result of the same notion. While China is still not the biggest contributor to the World Health Organization, given its rising wealth and power, US has accused it of taking its side and covering up the virus spread instead of taking action against China.

To help verify all the facts and figures, you can log onto a very useful interactive tool available on WHO’s official website here.

Alternatively, you can also download ‘WHO Programme Budget 2018-2019’from the link provided here: Download Complete Budgetary Report of WHO Here