Women’s Day 2020: Prime Minister Narendra Modi announced on March 3, 2020 that on this women’s day, he would be giving away all his social media accounts to inspirational women, whose life story and work would inspire many people across the nation.

PM Modi made the announcement through his official twitter account. In the tweet, he said that if you are such a woman or know such inspiring women then share such stories using the hashtag #SheInspiresUs.

Select entries from the entire lot will get the chance to take over the Prime Minister’s social media accounts and share their ideas and thoughts with everyone. 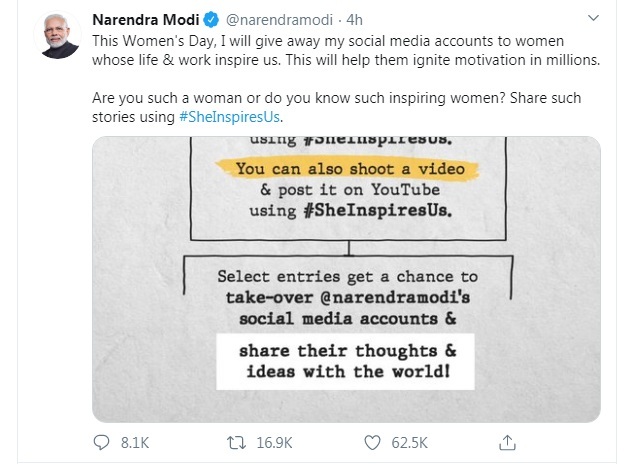 1. A woman whose life and work can inspire the world.

2. Anyone who knows inspiring women who have made a difference in their life.

• People can post their own story or the story of any inspirational women in their surroundings or anyone they know who has done extremely impactful work.

• The most inspiring stories will be selected and those women will be given a chance to take over the PM’s social media accounts.

PM Modi is the third-most followed world leader on Twitter, after US President Donald Trump who has 73.3M followers and former US President Barack Obama who has 113.3 followers. PM Modi also created history by becoming the first Indian to cross 50 million followers on Twitter.