World Economic Forum 2020: Greta Thunberg in her message stated that the world has less than 8 years to save the planet. 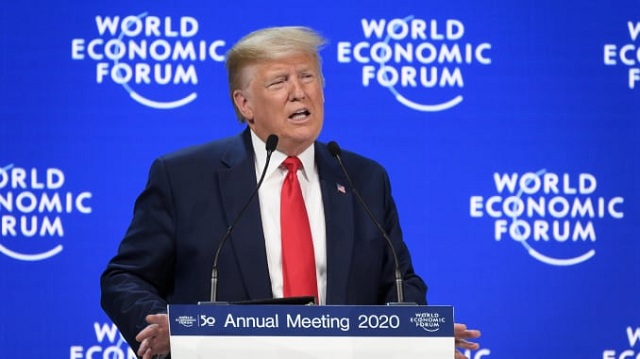 The theme highlights an idea perpetrated by WEF Founder Klaus Schwab that the managers of the companies have a duty towards customers and the whole economy, besides the company's shareholders.

US Economic boom: The United States is in the midst of an economic boom, the likes of which the world has never seen before. We have regained our stride, rediscovered our spirit and reawakened the powerful machinery of American enterprise.

New Trade Deals: America is thriving, flourishing and winning again like never before. Just last week, the US concluded two extraordinary trade deals-the agreement with China and the US-Canada-Mexico agreement, the two of the biggest trade deals ever made. The deals represent a new model of trade for the 21st century, as they are fair, reciprocal and prioritise the needs of workers and families.

US Economy Turnaround: American economy’s turnaround has been nothing short of spectacular. When I took office 3 years ago, America’s economy was in a dismal state. Under the previous US administration, almost 200,000 manufacturing jobs had vanished, wages were falling and almost 5 million Americans had left the labour force. Experts predicted a decade of slow growth or negative growth, high unemployment and dwindling workforce and shrinking of the middle class. America has now gained over 7 million jobs, an unthinkable number. The projection was just 2 million. The unemployment rate is now less than 3.5 percent.

US-China Relationship: America’s relationship with China has never been better. There was a rough patch earlier but it has never been better than what it is now. The US shares an extraordinary relationship with Chinese President Xi Jinping. China will spend an additional USD 200 billion over the next two years on American services, agriculture, energy and manufactured goods. These achievements would not have been possible without the implementation of tariffs, which we had to use and we are using them on others too. 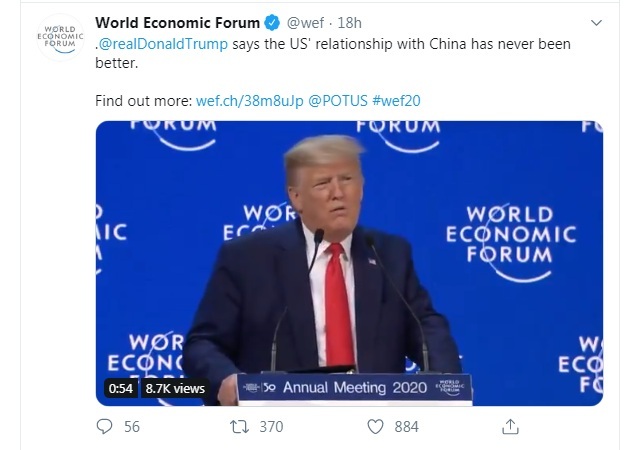 Energy Independence: The United States is also boldly embracing energy independence. The US is by far the number one producer of oil and natural gas anywhere in the world. We are on the verge of having almost unlimited reserves of energy including traditional fuels, LNG, clean coal, next-generation nuclear power and gas hydrate technology. The US President called upon America’s European allies to use its vast supply of energy and achieve energy security. He said that the European allies no longer have to be vulnerable to unfriendly energy suppliers.

One Trillion Trees initiative: The US has the cleanest air and drinking water on earth and we are going to keep it that way. The US is committed to conserving the environment. The US will join One Trillion Trees initiative, launched at the World Economic Forum. In doing so, the US will continue to show strong leadership in restoring, growing and better managing the trees and forests.

• Greta Thunberg delivered her key message on climate change during a session called “Forging a Sustainable Path Towards a Common Future”, alongside other teenage activists. The World Economic Forum had invited a group of teenage 'change-makers' to Davos 2020 for greater engagement with young people.

• Greta Thunberg in her message stated that the world has less than 8 years to save the planet. She demanded immediate action from the delegates at the forum. 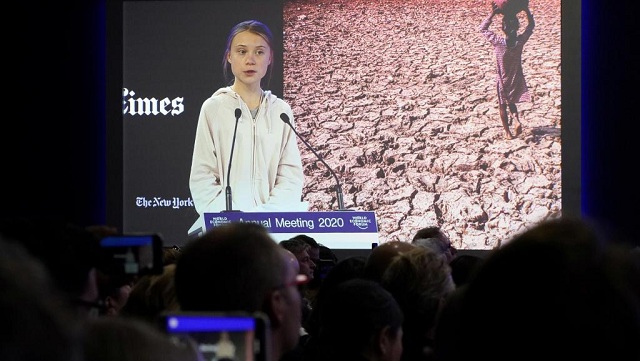 • The young activist stated that we don’t need a ‘low-carbon economy or ‘lower emissions’. The emissions have to stop if we are to have a chance to stay below the 1.5 degrees target.

• It is important to stay below the 1.5 degrees target because even at 1 degree people are dying from climate change.

• She further stated that the richer countries will need to get down to zero emissions much faster and then help the poorer countries in doing the same.

India is the largest consumer of LED bulbs and this has helped the nation in reducing power consumption and carbon emissions. This was stated by Union Minister for Commerce and Industry, Piyush Goyal who is leading the Indian delegation at the 50th World Economic Forum at Davos. The Minister stated that India will rely on coal as a baseload for the grid, to enable it to start introducing renewables.

The World Economic Forum is a non-governmental organization, which was founded in 1971. The forum aims to improve the state of the world by bringing together key leaders from political, business and academic backgrounds to redefine global, regional and industry agendas. The forum comprises some of the world’s largest corporations.

The World Economic Forum holds its annual meeting in January every year at Davos. This year is its 50th meeting. Besides the yearly event, the organization also conducts 6-8 regional meetings in different locations across India, Africa, East Asia and Latin America.