Yes Bank CEO-designate Prashant Kumar has assured that all deposits in the bank are safe and the customers will be able to enjoy all the banking services from 6 pm today.

Kumar also assured that there are no issues concerning the liquidity of the bank, as all of its branches and ATMs will have adequate cash supply. He also assured that all deposits in the bank are safe and the customers will be able to enjoy all the banking services from 6 pm today that they enjoyed before the bank was placed under moratorium. 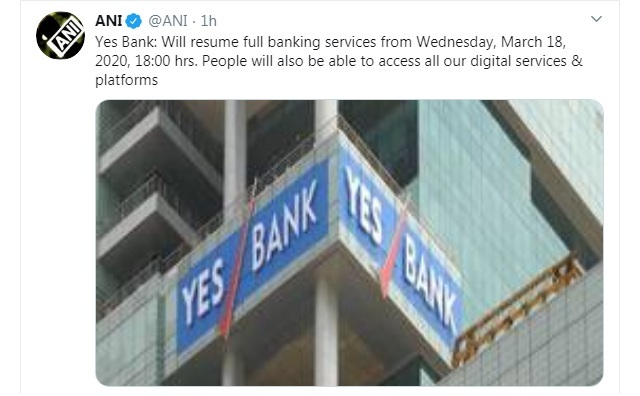 The Union Finance Ministry issued a notification on Yes Bank’s reconstruction scheme on March 13 and stated that the moratorium issued by the government will cease to be in effect from 6 pm on March 18. The SBI and other investors have expressed interest in making an investment in the private sector bank and to participate in its rescue plan.

• Under Yes Bank’s rescue plan, the authorized capital of the reconstructed bank will be altered to Rs 6200 crore and the number equity shares to Rs 3000 crore, while the preference share capital will continue to be Rs 200 crore.

• The reconstructed bank can begin allotting its equity shares after two working days following the beginning of the reconstruction scheme.

• The investors who have bought the shares of the reconstructed bank will not be required to pay capital gains tax under the Income Tax Act, 1961for any profit or gains due to such subscriptions.

• There will be a 3 year lock-in period from the start of the scheme concerning the shares held by existing shareholders on the date of the scheme’s commencement and shares allotted to the investors under the plan.

New Board of Directors to be constituted

A new board of directors will be constituted, which will comprise the following people:

1. Prashant Kumar: Former CFO/ Deputy MD of SBI will be the new CEO and MD of Yes Bank.

In addition to this, the investor banks will nominate two officers as Directors of the reconstructed bank in addition to the given names. The RBI may also appoint additional directors as it may deem necessary. The investor with voting right of 15 percent will have the right to nominate one Director on the reconstituted Board. The total number of Board members, excluding the additional directors appointed by the RBI, shall, however, not exceed the maximum prescribed under the articles of association.

The term of the board members will be for one year or until an alternate board is constituted by the reconstructed bank, whichever is earlier.

All employees of the reconstructed bank will continue their services on the same terms and with the same remuneration as applied to such employees before the commencement of the scheme for a minimum of one year.

The Reserve Bank of India (RBI) had placed YES Bank under a moratorium on March 5, 2020 as the bank had given out large loans and failed to recover them. The RBI decided to step in when the private sector lender failed to raise $2 billion to save itself. The apex bank then set a withdrawal limit of Rs 50,000 per account per person.

Shortly after the move, the government announced a reconstruction plan for YES Bank, which came into effect on March 13. The plan involves SBI and other investors including ICCI, HDFC, Axis and Kotak Mahindra investing in Yes Bank and effectively owning at least 49 percent stake in the bank.