Indian Institute of Technology's alumnus Bob Balaram has created a space chopper which will fly over the Martian skies. This summer, the helicopter created by him will fly over Mars with NASA's Perseverance rover. 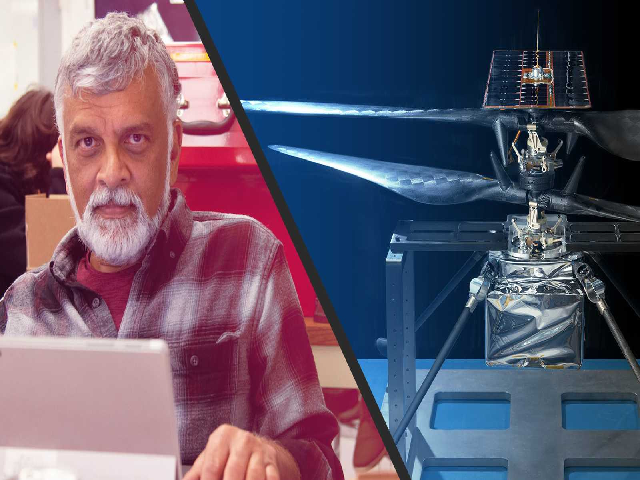 Indian Institute of Technology's alumnus Bob Balaram has created a space chopper which will fly over the Martian skies. This summer, the helicopter created by him will fly over Mars with NASA's Perseverance rover.

Bob Balaram, a robotics technologist, attended a knowledgeable conference, where Stanford professor Ilan Kroo spoke about a "mesicopter," a miniature airborne vehicle for Earth applications that was funded as a NASA Innovative Advanced Concepts proposal.

Super Pink Moon 2020: What is April full moon, timings, how to watch Supermoon in India and more

After this proposal, Balaram with 35 years of experience in robotics technology, suggested a joint proposal with Stanford for a NASA Research Announcement submission and recruited AeroVironment, a little company in Simi Valley, California. Though the proposal got positive reviews, it wasn't selected for funding. However, it did yield a blade-rotor test under Mars conditions at the Jet Propulsion Laboratory (JPL) of NASA.

Elachi asked him to write down a replacement one for the competitive call for Mars 2020 investigation payloads. However, his helicopter idea wasn't selected as an instrument, but it was funded for technology development and risk reduction.

Balaram described the construction of the chopper as a wonderfully blank canvas, but it had numerous restrictions too. However, with the knowledge of Physics, he is very close to the mission.

Once Balaram built a four-pound helicopter, the next challenge was to find an easily accessible place on Earth with a thin atmosphere just like the one on Mars. Therefore, the 25-foot Space Simulation Chamber at JPL was selected.

About two-and-a-half months after landing at Jezero Crater, the Mars Helicopter team will have a window of about 30 days to perform a technology demonstration within the actual environment of the Mars, starting with a series of vehicle checkouts, followed by attempts of first-ever flights within the very thin Martian atmosphere.

As per Balaram, despite all the tests available on Earth, he could also fail. But, if the chopper succeeds on Mars, it'll be kind of a Wright Brothers moment on another planet.

This potential breakthrough could help pave the way for future crafts that may expand NASA's portfolio of vehicles to explore other worlds. The main purpose of the Mars 2020 mission is to deliver NASA's Perseverance rover, which will continue to explore the past habitability of Mars and look for the signs of ancient microbial life.

It will also cache rock and soil samples for pickup for a potential future mission and help pave the way for future human exploration of Mars. It must be noted that even if the helicopter mission fails, the science-gathering mission of NASA's Perseverance rover won't be affected.