Democracy is a system in which the public elects its ruler himself. The term democracy is derived from two Greek words 'Demos' and Kratos. Demos mean 'people' and Kratos means 'rule'. How this system was prevalent in ancient times? Through this article, you will learn how the concept of democracy is taken from Rig Veda or about the democratic elements in Ancient India. 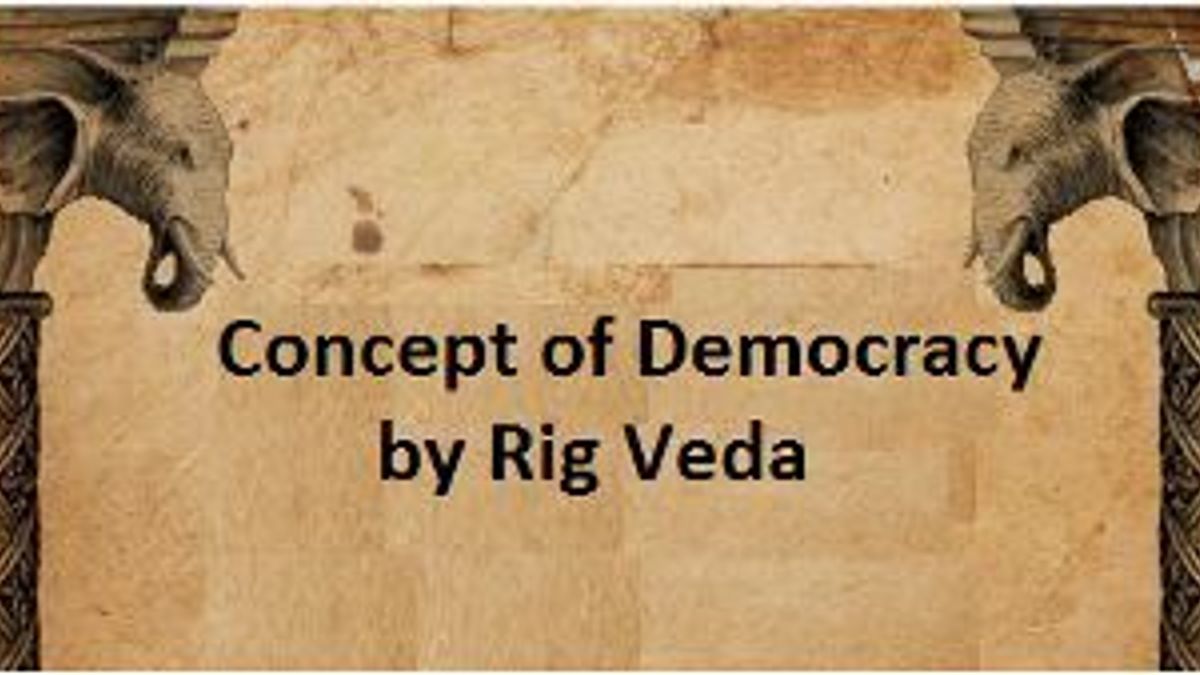 Democracy is the system of the people or by the people. Thus, it is a system where people are responsible for choosing their rulers or representatives. It is a pattern in which freedom, equality, and brotherhood are the basic principles.  Historically, the democratic system of governance in India was started from the Vedic period.

Since ancient times, democratic system has been strong in India? Its evidence is derived from ancient literature, coins, and various records.

It would not be wrong to say that the principle of democracy is originated from the Vedas. The Sabha and Samiti are mentioned in both Rig Veda and Atharva Veda. In these meetings, a decision was made after the discussion with the king, ministers, and scholars at that time. This shows how politics was at that time because people together used to settle the decisions of the Sabha and Samiti with good vision. Even people of different ideologies were divided into various groups and take a decision after mutual consultation.

Occasionally there was also a conflict between ideas due to the differences in the mindsets of people. So, it will not be wrong to say that the beginning of bicameral legislation can be considered since the Vedic period. Even the selection of Indra was also due to these committees during the Vedic period. At that time, Indra was the post which was known as Kings of King. The word republic has been used forty times in Rig Veda, 9 times in Atharva Veda and in Brahman texts many times. After the decline of the Vedic era, the monarchs emerged and remained the ruler for a long time.

How the pre-Aryan symbol ‘Swastika’ is older than 11000 years? The terms Sabha( gathering), Samiti ( smaller Gathering or Committee ) Rajan or Raja ( Householder, Leader) exists and are found in Vedic literature. Rig Veda also says that the position of the King (Leader) was not absolute, and he could be removed by the Sabha or the Assembly.

Rig Veda had made democratic principles and its ideals a diety and called it ‘Samjnana’. This term means the collective consciousness of the people. The hymns of Rigveda addressed to Samjnana called upon the people to gather in their assembly i.e. Samgachchaddhvam and speak there in one voice i.e. Samvadaddhvam, in a union of minds (Sammanah), of hearts (Samachittam), of policy (Samanmantrah), and of hopes and aspirations (akuti).

Source: www.2.bp.blogspot.com
Do you know that some important facts of modern parliamentary democracy like a decision by the majority were also prevalent at that time? After the Vedic Period, the description of small Republics is found in which people participate together in the decision-making process related to the administration. The Republic was defined as a democratic system in ancient India. In the Atreya Brahmins, Ashtadhyayi of Panini, inscriptions of Mahabharata, Ashoka pillars, the historical writings of contemporary historians, Buddhist and Jain scholars, in the Manusmriti, various historical evidence are found.

In Mahabharata, there was a gathering of common people called Parliament in the Shanti parv which was also known as Jan Sadan. Democracy was also prevalent in the Buddhist period. Licchavi, Vaishali, Malak, Madak, Kamboj, etc. are examples of the democratic system of that era.  Vaishali's first king Vishal was chosen via election. In Kautilya’s Arthashashtra the Republic has been described in two categories fist, the Ayudh Republic, in which the only king makes decisions and the second is Republic only in which everyone can participate in the decision making process. In Panini, Janpad's word is also mentioned. In which the representative was elected by the people and he only takes care of the administration.
From this article, we come to know that democratic elements were also there in Ancient India.

Summary of the Vedic Age: Polity | Society | Position of Women