What is the difference between Uttarayan and Dakshinayan? 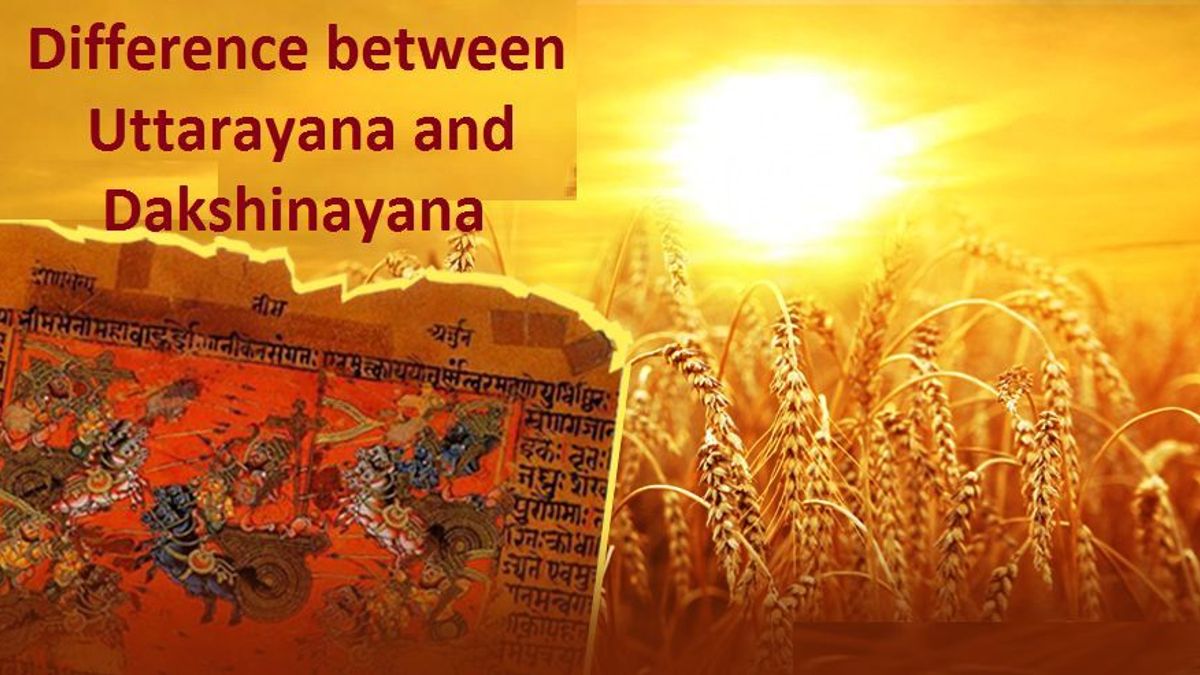 What is the difference between Uttarayan and Dakshinayan?

In India Makar Sankranti is celebrated every year on 14 January which is a fixed day of the solar calender. It is the day when sun begins its movement away from the Tropic of Capricorn, towards the Northern Hemisphere. It is also known as Uttarayan. Have you earlier heard about Uttarayan and Dakshinayan. What is the meaning of Uttarayan and Dakshinayan, its importance, significance, history and differences are also discussed in this article.

As we know that there are two Ayans or Solstices are there in one year or we can say that Sun changes its position twice every year. These changes are known as Uttarayan i.e. summer Solstice and Dakshinayan i.e. winter solstice. It begins from the day of Makar Sankranti which is considered as a symbol of positivity. In this period Sun travels from Capricorn to Cancer that is from South to North. In hindi it is:
[उत्तरायण = उत्तर (North) + आयन].
It is six months long period. During Uttarayan days are longer and nights are shorter. Several festival and pilgrimages are involved in this period. Let us tell you that this period is also known as the period of devas, donations, charities, marriages etc. It is said that on Makar Sankranti the sun rays are very healthy for the body and skin. Also, in several states of India people used to fly kites to leverage the opportunity of sun bath knowingly or unknowingly.
This northward movement of the Sun from winter to summer solstice consists of three seasons: winters, spring and summers. On January 14 Uttarayan period (Makar Sankranti) starts and ends at Karka Sankaranti that is 16 July.

As name suggests Dakshinayan is just opposite to Uttarayan. It is the period when Sun travels back from Cancer to Capricorn that is from North to South. As, Sun travels to the South direction so, this journey of Sun is known as Dakshinayan.
[दक्षिणायण = दक्षिण (south) + आयन]
In this period rainy season, autumn and winter season falls. This period begins from 21/22 June. According to religious beliefs, Dakshinayan is the night of Kal Devas. Nights are longer and days are shorter. Various kinds of auspicious works are prohibited during this period. Basically, it is said that it is a period of desires and lust. Therefore, fasts, yagyas, worship and other religious activities cure diseases and sorrows. 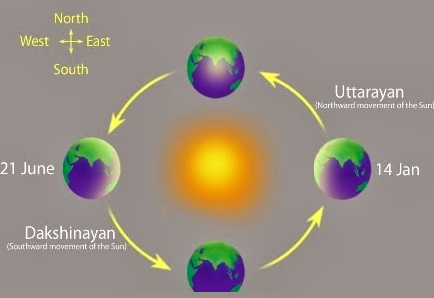 Note: The meaning of the movement of Sun means that the apparent movement of the Sun as seen from earth since it is the earth that orbits around the Sun in elliptical path and not the other way round. The Earth’s axis of rotation moves north-south.

Do you know about Equinox?

When the axis of the Earth is tilted, two times of the year exists. It is tilted neither toward nor away from the sun and results nearly equal amount of daylight and darkness of all latitudes. These events are known as Equinoxes. It is derived from two latin words - aequus (equal) and nox (night). On these two equinoxes, sun is directly overhead at noon. It is also said that, on the equinox and for several days before and after the equinox, the length of day will range from about 12 hours and six and one-half minutes at the equator, to 12 hours and 8 minutes at 30 degrees latitude to 12 hours and 16 minutes at 60 degrees latitude.

According to the Hindu scriptures, Uttarayan is the period when Sun travels from South to North which is also known as Makar Sankranti. Out of six seasons, three falls in this solstice that is winter, spring and summer. According to Puranas, Bhishma Pitama waited for Uttarayan in order to sacrifice his life. It is also believed that Ganga from heaven reached the Earth on this auspicious day. Hence, Magh Bath is also considered important. During Uttarayan all yagyas, austerities, marriages etc. are carried out. Also, it is said that Uttarayan is the period of day time for God and Dakshinayan is night for them. Dakshinayan comprises winter, autumn and monsoon. During Dakshinayan, sky is filled with clouds. In terms of sadhana, Dakshinayana is for purification. Uttarayan is for enlightenment.

So, now it is clear that Uttarayan is the movement of Sun from South to North and just opposite is the Dakshinayan. Both have their own importance.