Electoral reforms refer to the introduction of the best practices in ensuring better democracy, clean politics, fair elections, ideal members of legislative houses, true representation and so on.

The process of electoral reforms focuses mainly on broadening the core meaning of democracy, making it more citizen-friendly.

Following are the Constitutional articles related to electoral reforms:

2. Article 324 deals with the Superintendence, direction, and control of elections to be vested in an Election Commission.

3. Article 325 states that no person to be ineligible for inclusion in or to claim to be included in a special, electoral roll on grounds of religion, race, caste or sex.

4. Article 326 deals with the Elections to the House of the People and to the Legislative Assemblies of States to be on the basis of adult suffrage.

5. Article 327 provides power to the Parliament to make provision with respect to elections to Legislatures.

6. Article 328 provides power to Legislature of a State to make provision with respect to elections to such Legislature.

7. Article 329 provides to create a bar on the court to make any interference by courts relating to electoral matters.

1.  Transparency about the background of the candidates

2.  Freeing the election processes from muscle and money power

3.  Prohibiting the nexus between business and politics

4.  Availing all the citizens, eligible to vote a comfortable, friendly and assured facilitation of vote casting

5.  Upholding the secrecy of voters

6.  Fair registration and recognition of the political parties and without any kind of influence

7.  The solution of delisting of illiterate voters

10. Streamlining the preparation of electoral rolls

The requirement of Electoral Reforms:

The need for electoral reforms has also been felt mainly due to removing the malicious people and malevolent activities they are involved in. Their requirement can further be elaborated as follows 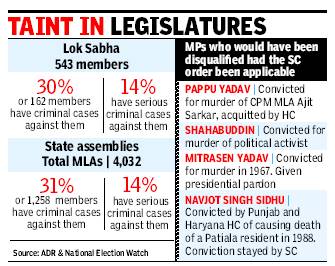 1.  Election process should reflect the situation of the day and should not be imposed on contemporary society

2.  To prohibit the criminalisation of politics

3.  To stop the misuse of the government machinery.

4.  To discourage money and muscle power to contribute in election processes

5.  To dismay non-serious candidates to contest in the election

6.  Election processes should be neutral, free from any bias for any political parties

7.  To enhance the trust in the eyes of citizens towards electoral processes

8.  To employ the use of technology to further the election processes and be in synch with modern days methods.

9. Some candidates fight election from two seats so it is the need of the hour that makes it compulsory for the candidates to pay the expenses occurred on the election of their second constituency.

Election Cost per Voter in Lok Sabha Election since 1952