England vs New Zealand head to head in World Cups 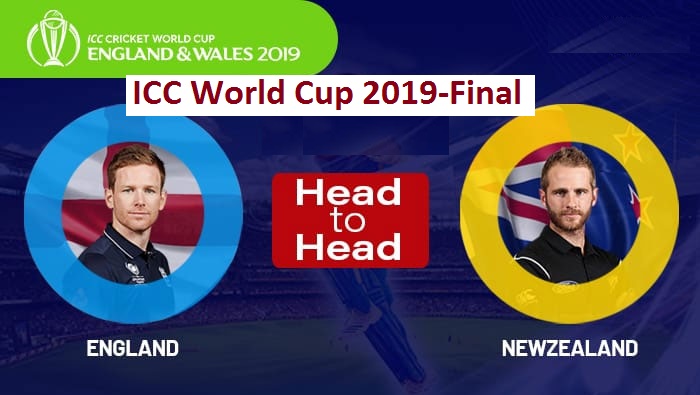 This is the first time in the history of ICC cricket World Cup that these two teams will fight for World Cup trophy.

This is the second consecutive entry of New Zealand team in the cricket World Cup final while England had already played three finals but lost all of them.

The earlier best performance of the English team was appearance in the final of 1979, 1987 and 1992 but team lost all the finals.

England cricket team has appeared in every edition of the Cricket World Cup to date, but have never won the competition. England and wales is the only country which has hosted the world cup for 5 times (more than any other country).

The England cricket team represents England and Wales (and until 1992 also Scotland) in international cricket.

Now the England will play its 4th final of the cricket world cup against New Zealand on 14th July 2019.

So the final of this World Cup will give a new cricket World Cup Champion on 14th July 2019.

Let's have detailed information of the ODI history between these two teams.

Currently English team is at the number one position of the ICC's ODI team ranking While New Zealand is at number 3 position.

Since 1973, England and New Zealand have played 90 matches with each other;

In the World Cups

So the above data shows that New Zealand team has better records against England not only in overall ODI matches but in World Cups also.

Before the World Cup of 2019; England had played 3 finals, 2 Semi Finals and 2 Quarter Finals. While, on the other hand New Zealand (participating in the Cricket World Cups since 1975) has played 7 semifinals and entered its second final consecutively.

Best records of the players of both teams

While Stuart Broad (Eng) is the most successful bowler who had claimed 14 wickets of New Zealand in 10 innings in ODI matches.

So this was the complete historical description of the new Zealand and England cricket teams in the World Cups. We hope that the final match of the Cricket World Cup 2019 would be an interesting match.

List of Winners & Runners-up of the ICC Cricket World Cups