List of Five Year Plans before the Liberalisation in India

Let us have a detailed explanation of 7 five year plans of India;

The first Indian Prime Minister, Jawaharlal Nehru presented the first five-year plan to the Parliament of India on December 8, 1951. This plan was based on the Harrod-Domar model. The plan addressed, mainly, the agrarian sector, including investments in dams and irrigation. The agricultural sector was hit hardest by the partition of India and needed urgent attention.

The target growth rate was 2.1% annual gross domestic product (GDP) growth; the achieved growth rate was 3.6%. The net domestic product went up by 15%. The monsoon was good and there were relatively high crop yields, boosting exchange reserves and the Per Capita Income, which increased by 8%. National income increased more than the per capita income due to rapid population growth. Many irrigation projects were initiated during this period, including the Bhakra Dam and Hirakud Dam. 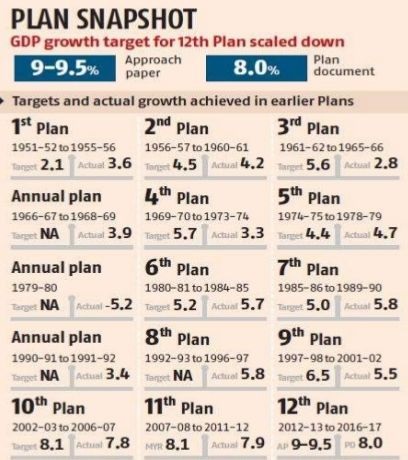 The second five-year plan focused on industry, especially heavy industry. Unlike the First plan, which focused mainly on agriculture, domestic production of industrial products was encouraged in the Second plan, particularly in the development of the public sector. The plan followed the Mahalanobis model, an economic development model developed by the Indian statistician Prasanta Chandra Mahalanobis in 1953.

The plan attempted to determine the optimal allocation of investment between productive sectors in order to maximise long-run economic growth. It used the prevalent state of art techniques of operations research and optimization as well as the novel applications of statistical models developed at the Indian Statistical Institute. The plan assumed a closed economy in which the main trading activity would be centered on importing capital goods.

Hydroelectric power projects and five steel mills at Bhilai, Durgapur, and Rourkela were established. Coal production was increased. More railway lines were added in the northeast.

The Atomic Energy Commission was formed in 1958 with Homi J. Bhabha as the first chairman. The Tata Institute of Fundamental Research was established as a research institute. In 1957 a talent search and scholarship program was begun to find talented young students to train for work in nuclear power. Target Growth-4.5% Growth achieved:4.0%.

The third plan stressed upon agriculture and improvement in the production of wheat, but the brief Sino-Indian War of 1962 exposed weaknesses in the economy and shifted the focus towards the Defence industry or Indian army. In 1965–1966, India fought a [Indo-Pak] War with Pakistan. Due to this there was a severe drought in 1965.

The war led to inflation and the priority was shifted to price stabilisation. The construction of dams continued. Many cement and fertilizer plants were also built. Punjab began producing an abundance of wheat. Target Growth: 5.6% Actual Growth: 2.4%.

At this time Indira Gandhi was the Prime Minister. The Indira Gandhi government nationalised 14 major Indian banks and the Green Revolution in India advanced agriculture. In addition, the situation in East Pakistan (now Bangladesh) was becoming dire as the Indo-Pakistani War of 1971 and Bangladesh Liberation War took Funds earmarked for the industrial development had to be diverted for the war effort.

India also performed the Smiling Buddha underground nuclear test in 1974, partially in response to the United States deployment of the Seventh Fleet in the Bay of Bengal. The fleet had been deployed to warn India against attacking West Pakistan and extending the war. Target Growth: 5.7% Actual Growth: 3.3%

Stress was by laid on employment, poverty alleviation, and justice. The plan also focused on self-reliance in agricultural production and defence. In 1978 the newly elected Morarji Desai government rejected the plan. Electricity Supply Act was enacted in 1975, which enabled the Central Government to enter into power generation and transmission.

The sixth plan also marked the beginning of economic liberalisation. Prize controls were eliminated and ration shops were closed. This led to an increase in food prices and an increase in the cost of living. This was the end of Nehruvian Socialism and Indira Gandhi was prime minister during this period.

Family planning was also expanded in order to prevent overpopulation.

The Seventh Plan marked the comeback of the Congress Party to power. The plan laid stress on improving the productivity level of industries by upgrading of technology.

The main objectives of the 7th five-year plans were to establish growth in areas of increasing economic productivity, production of food grains, and generating employment.

As an outcome of the sixth five-year plan, there had been a steady growth in agriculture, control on the rate of Inflation, and favourable balance of payments which had provided a strong base for the seventh five years plan to build on the need for further economic growth. The 7th Plan had strived towards socialism and energy production at large.