What is the History and Distance of Marathon Race?

Marathon is a long-distance race, completed by running, walking, or walk/run. Marathon race was in the memory of a Greek soldier Pheidippides who run approximately 26 miles from Battle of Marathon to Athens, to report the victory of his country in the war. The official distance of the Marathon race is 42.195 kilometres (26.219 miles; 26 miles 385 yards).

There was a time when parents used to tell their children that;

But now the scenario has changed and the parents also encourage their children to participate in the games and even they can choose games as their career option.
In the same way there a game known as the Marathon race which decorated the career of many racers. In this article we have explained the history of the marathon race and the distance covered under this game.

History of the Marathon race;

The history of marathon race began in 490 BC. There was a war going on between the Greek and Persian soldiers on the grounds of marathon, 26 miles away from Athens.
In the battle of Marathon, around 10 thousand Greek soldiers defeated one million Persian soldiers and protected their homeland. Obviously this was great news so a Greek soldier “Pheidippides” sent to convey this victory message to the citizens of Greek or Yunan. 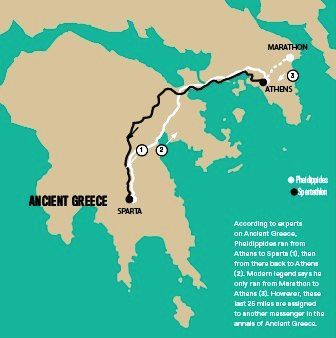 So the Greek soldier "Pheidippides" run around 26 miles from Battle of Marathon to Athens, to report the victory of his country in the war without stopping in the way.
"Pheidippides" was so happy with this victory that he had removed his arms and armor to run fast. Though Pheidippides was very tired from the war but still he keep on running through the forests, thickets and hills. 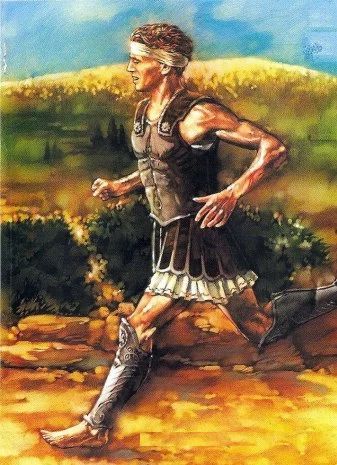 When he entered Athens city, his feet were damaged badly, his breathe was so fast but anyhow he managed to spoke to his countrymen; exclaiming νενικήκαμεν (nenikēkamen, "we have won!"), before collapsing and dying.

Distance of the Marathon Race;

In the memory of the "Pheidippides" the soldier, the marathon race was included in the very first Olympic Games held in 1896. The marathon was one of the original modern Olympic events in 1896, though the distance did not become standardized until 1921.

The distance of this race is 26 miles, 385 yards year i.e. approximately 42.195 km. It is worth to mention that the distance between the Marathon to Athens was almost the same i.e. 26 miles.

The men have been taking part in the marathon race since 1896 but the first woman marathon race was held in the 1984 Los Angeles Olympics where US runner Joan Benoit won the first Olympic Gold Medal.

After reading this article, we expect that you must understand that what was the real story behind the inception of the marathon race in the world?