Can India become next manufacturing hub? 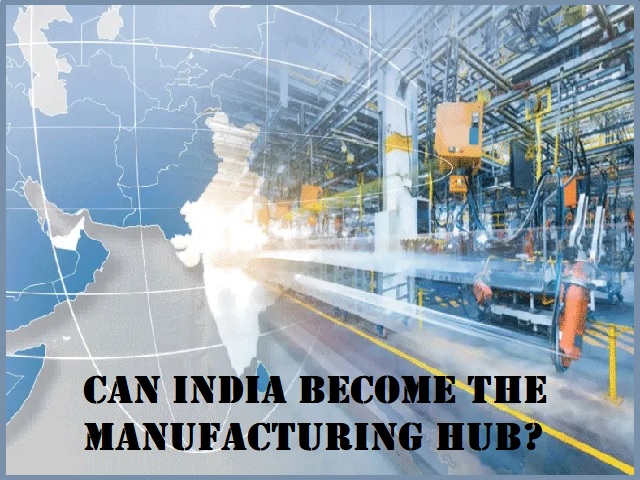 India as a manufacturing hub

Earlier, Prime Minister Modi gave a mantra 'vocal for local' during his address to the nation on May 12, 2020. The idea was to promote local brands and goods. He further stated that the brands which are global today were once local.

Boycotting Chinese products: Is it really possible for India?

Prime Minister Modi has a clear vision to make India self-reliant. In his latest speech, he has focussed on turning India into a global manufacturing hub. But the question here arises that is it possible for India when it's Per Capita Income, is nearly 7,680 PPP Dollars as per World Bank in 2018. In this article, we will discuss the various aspects involved in making India a global manufacturing hub.

If we go by Per Capita Income (GDP divided by Population), we rank below China. This means that an average Indian lags behind an average Chinese or American citizen. Thus, if India wants to improve its Per Capita Income, it needs to grow rapidly for many years to come. This growth can only be possible if the manufacturing sector rises.

In the 1980s, China began as a producer of low-end products and in 2010, it became the largest manufacturer in the world, overtaking the US in all the sectors-- drugs to electronics. In 2018, as per UN data, China accounts for 28% of the global manufacturing output.

India imports nearly seven times more from China than it exports to it. India imports goods more than $50 billion from China and exports goods worth $2.5 billion to China. It must be noted that Chinese products are cheaper than their Indian counterparts.

India imports many raw materials as well as finished products such as steel, minerals, consumer durables,  etc. from China. Thus, if India plans to boycott Chinese products, this will affect India's ability to produce finished goods as the prices of the finished goods will rise. Secondly, it will impact our overall competitiveness as the goods to be exported will have higher prices. The current process of manufacturing is interconnected. Thus, instead of boycotting products from China, we can find alternative methods such as cutting the manufacturing cost in India to emerge as a manufacturing hub in the world.

Due to the coronavirus pandemic, the supply shock is experienced as many parts of the world are shut down, including China, where the first case was reported. This has led to looking for alternative manufacturing centres. Keeping this in view, India wants to grow as a global manufacturing hub and may replace China in the coming years.

Countries like Japan, America, South Korea, who were dependent on China, are now planning to shift their base in India. As per several reports, companies have initiated talks with the Indian authorities and may set up industries anytime soon in India in sectors like electronics, medical devices, mobile phones, etc.

What India must learn from China?

In the 1980s, when China started manufacturing initially, it provided world-class infrastructure, logistics, complete policy support to the sector as well as low labour wages, etc. This led it to emerge as the world's largest manufacturer sidelining the US.

To grab this opportunity and to stand out among others, India needs to create a world-class manufacturing ecosystem offering highly trained and efficient manpower, ease of doing business, innovations, etc. This will, in turn, attract the global companies to set up their units in India.

India also needs to build up its capabilities in all kinds of production needs by fostering innovation. The 'Make in India' initiative launched by Prime Minister Modi will enhance the skill of the manpower, thus creating a large pool of skilled manpower.

Two decades back, India became the services hub as it had a large pool of IT experts and English speaking graduates. Similarly, to grab this opportunity and to become the next manufacturing hub, India will require skilled manpower in huge numbers.

Aatma Nirbhar Bharat Abhiyan: All you need to know about the package announced by Prime Minister Modi