Former President of India and Bharat Ratna, Pranab Mukherjee died on 31 August 2020, at the age of 84, after battling a long illness. He was on ventilator support after he underwent brain surgery for the removal of a clot. Prior to surgery, he tested positive for COVID-19. 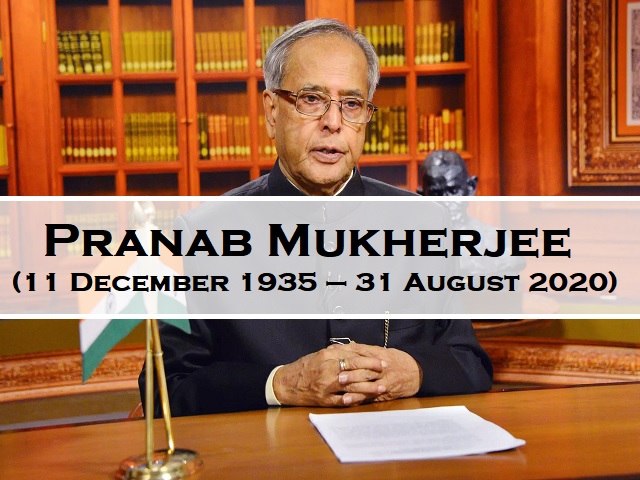 Former President of India, Pranab Mukherjee died on 31 August 2020, at the age of 84, after battling a long illness. He was in a comatose state, but his vital parameters were stable as per the Army’s Research and Referral (R&R) Hospital.  He was on ventilator support after he underwent brain surgery for the removal of a clot. Prior to surgery, he tested COVID-19 positive. He was treated at the Army's Research and Referral (R&R) hospital.

Sad to hear that former President Shri Pranab Mukherjee is no more. His demise is passing of an era. A colossus in public life, he served Mother India with the spirit of a sage. The nation mourns losing one of its worthiest sons. Condolences to his family, friends & all citizens.

I was new to Delhi in 2014. From Day 1, I was blessed to have the guidance, support and blessings of Shri Pranab Mukherjee. I will always cherish my interactions with him. Condolences to his family, friends, admirers and supporters across India. Om Shanti. pic.twitter.com/cz9eqd4sDZ

Pranab Mukherjee served as the 13th President of India from 2012 to 2017. He has been a senior Congress leader and has served on various ministerial posts. In the year 2019, Ram Nath Kovind, the President of India, honoured him with India's highest civilian honour-- Bharat Ratna.

Pranab Mukherjee did his schooling from Suri Vidyasagar College, Suri. He did his Masters in Political Science and History from the University of Calcutta. From the same university, he earned his LLB degree.

On July 13, 1957, Pranab Mukherjee married Surva Mukherjee and the couple had two sons (Indrajit Mukherjee and Abhijit Mukherjee and a daughter (Sharmistha Mukherjee). His wife Surva migrated from Narail, Bangladesh to Kolkata when she was 10. She died on August 18, 2015, due to a cardiac arrest, at the age of 74.

His elder son Abhijit is a Congress MP from Jangipur, West Bengal and his daughter Sharmishtha is a Kathak dancer and a politician with Congress.

Prior to politics, he served as an upper-division Clerk in the Office of Deputy Accountant-General, Calcutta. In the year 1963, he joined Vidyanagar College, Kolkata as an Assistant Professor of Political Science. He also worked for Desher Dak (Call of Motherland) as a journalist.

In the year 1969, Mukherjee entered politics and managed the election campaign of V.K. Krishna Menon, an independent candidate. The then Prime Minister of India, Indira Gandhi, recognised his talents and offered him to join Congress, an offer he didn't reject. In 1969, Indira Gandhi helped him to become a member of Upper House of the Parliament (Rajya Sabha). In 1975, 1981, 1993 and 1999, he was re-elected to the Rajya Sabha.

Pranab Mukherjee became Indira Gandhi's most trusted lieutenants and a minister in her cabinet in 1973 and is often described as her 'man for all seasons'. He was also active during the controversial Emergency which was imposed on India for two years-- 1975-1977. From 1982 to 1984, Mukherjee served as the Finance Minister and appointed Manmohan Singh as the Governor of RBI.

Following his expulsion from the mainstream politics, Mukherjee formed Rashtriya Samajwadi Congress (RSC) in West Bengal which later merged with the Congress after a compromise with Rajiv Gandhi.

In 1991, after the assassination of Rajiv Gandhi, the then Prime Minister of India, PV Narasimha Rao appointed Muukherje as the Deputy Chairman of the Indian planning commission. From 1995-1996, Mukherjee served as the External Affairs Minister in Narasimha Rao's cabinet.

In 2004, he became the Leader of the House in the Lower House of the Parliament (Lok Sabha). Before Manmohan Singh was appointed as the Prime Minister of India, it was speculated that Mukherjee will hold the top executive post-- Prime Minister.

In Manmohan Singh's Cabinet, Mukherjee held various posts such as Defence, Finance, External Affairs and more. He also headed the Congress Parliamentary Party and the Congress Legislative Party, having all the Congress MPs and MLAs.

On August 10, 2020, Pranab Mukherjee tested positive for COVID-19, prior to his brain surgery to remove the blood clot. On August 13, 2020, he was in a comatose state, but his vital parameters were stable as per the Army’s Research and Referral (R&R) Hospital.

On August 19, 2020, his health declined as he had developed a lung infection. On August 25, 2020, his renal parameters became slightly deranged. Since then, his condition started declining.

On August 31, 2020, the hospital stated that he was in septic shock since a day earlier caused by the lung infection. In the evening, his son Abhijit Mukherjee confirmed via Twitter about his death.

3- Grand Collar of the Order of Makarios II-- highest order of Merit awarded by Cyprus.

1- Best Finance Minister in World (1984)-- a survey by Euromoney magazine.

2- Finance Minister of Year for Asia (2010)-- Emerging Markets, the daily newspaper of record for World Bank and IMF.

4- Honorary Citizenship of Abidjan, the Republic of Côte d'Ivoire in June 2016.