List of all Presidents of India from 1947 to 2022: Draupadi Murmu is serving as the 15th President of India and is the first tribal woman to occupy the top constitutional post in the country.  Going by the support extended by various parties, National Democratic Alliance (NDA) candidate Draupadi Murmu, from the start, had a clear edge over the opposition's candidate Yashwant Sinha.

The President is the Head of the State in India. He or she is called the first citizen of the country. Article 52 of the Indian Consitution states that there shall be a President of India and as per Article 53, all the executive powers of the Union shall be executed by him or her either directly or through officers subordinates to him.

On 26 November 1949, the Constitution of India was adopted and came into force on 26 January 1950. The first constitutional head of the state, the President of India was Rajendra Prasad.

President of India: Election and Powers

In the Constitution Part V (The Union) under Chapter, I (The Executive) details of qualifications, election, and impeachment of the President of India are given. That is Articles from 52 to 78 in Part V of the Constitution deals with the Union Executive. The President of India is also the head of the executive, legislature, and judiciary of the country.

The President holds office for a tenure of five years from the date on which he enters his office. However, he can resign from his office at any time by addressing the resignation letter to the Vice-President. Further, he can also be removed from the office before the completion of his term by the process of impeachment. The President can hold office beyond his term of five years until his successor assumes charge. He is also eligible for re-election to that office.

The Presidential Election 2022 result gave the country its 15th President. Draupadi Murmu who was nominated by BJP as the National Democratic Alliance's candidate won the Presidential elections 2022 by beating opposition candidate Yashwant Sinha.

Going by the support that has been extended by various parties, Draupadi Murmu from the start enjoyed a clear edge over the opposition's Yashwant Sinha in Presidential Election 2022. The voting for the elections concluded on July 18 with over 99 percent of 4,796 eligible electors, including 771 MPs, and 4,025 MLAs, taking part in the process. Dr. Rajendra Prasad was the first President of India, who had worked as president for two terms. He was also the President of the Constituent Assembly and the Chief Leader of the Indian Independence Movement. He was awarded Bharat Ratna in 1962. Dr. Sarvepalli Radhakrishnan was born on 5 September 1888, and this day is celebrated as Teacher's Day. He was awarded Bharat Ratna in 1954. Dr. Zakir Husain became the first Muslim President of India and died at his post. The immediate Vice President, V.V. Giri was made the acting President. After that, Chief Justice of the Supreme Court Mohammad Hidayatullah became acting President from 20 July 1969 to 24 August 1969.
Mohammad Hidayatullah was awarded the Padma Bhushan in the field of art by the Government of India in 2002. He also brought a revolution in education in India. V.V Giri was the fourth President of India. His full name was Varahagiri Venkata Giri. He became the only person to be elected President as an independent candidate. In 1975, he was awarded Bharat Ratna. Fakhruddin Ali Ahmed was the fifth President of India. He was the second President who died in the post of the President. BD Jattha was made Acting President. Neelam Sanjeeva Reddy became the sixth President of India. He was the first Chief Minister of Andhra Pradesh. He was directly elected to the post of Lok Sabha speaker and became the youngest President who occupied Rashtrapati Bhavan and contested twice for the post of president. Prior to becoming the President, he was also the Chief Minister of Punjab and the Minister at the Centre. He also used Pocket Veto on the Indian Post Office Bill. During his presidency, many incidents took places, such as Operation Blue Star, the assassination of Indira Gandhi, and the 1984 anti-Sikh riots. R. Venkataraman was elected as the President of India from 25 July 1987 to 25 July 1992. Earlier he was Vice-President of India from 1984 to 1987. He has received many honours from different parts of the world. He is a receiver of "Tamra Patra" for his contributions to India's freedom struggle. Besides this, the Russian government had conferred the Soviet Land Prize for writing the travelogue on former Tamil Nadu Prime Minister, Kumaraswami Kamaraj's. He was the eighth Vice President of India before becoming president. From 1952 to 1956 he was the Chief Minister of Bhopal and Cabinet Minister from 1956 to 1967. The International Bar Association gave them the 'Living Legend of Law Award of Recognition' due to multi-achievements in the legal profession. K. R. Narayanan was the first Dalit President of India and the first Malayali person to receive the highest office of the country. He was the first President to vote in the Lok Sabha elections and addressed the state assembly. Dr. A. P.J. Abdul Kalam came to be known as ‘Missile Man of India’. He was the first scientist who took over the post of President and the first President of India who won the most votes. In his directorial, Rohini-1 satellites, Agni and Prithvi missiles were successfully launched. The Pokhran-II nuclear tests conducted in India in 1998 after the original nuclear test of 1974 saw him in a pivotal political, organisational and technical role. He was awarded the Bharat Ratna in 1997.

She was the Governor of Rajasthan before becoming the President. From 1962 to 1985, she was a member of the Maharashtra Legislative Assembly five times and was elected from Amravati to the Lok Sabha in 1991. Not only this, she was also the first woman president to fly Sukhoi.

Pranab Mukherjee was the finance minister in the central government before contesting the presidential election. He was awarded the best Parliamentary Award in 1997 and Padma Vibhushan, India's second-highest civilian honour in 2008. He died on 31 August, 2020 (Monday) at the age of 84.

Ram Nath Kovind was born on 1 October 1945 in Uttar Pradesh, India. He is an Indian lawyer and politician. He was the 14th and current President of India. He became the President on 25 July 2017 and is a member of the Bhartiya Janata Party. He is the former Governor of Bihar. His approach towards political problems earned him praise across the political spectrum. As a Governor his achievements were the creation of a judicial commission to investigate corruption in universities. 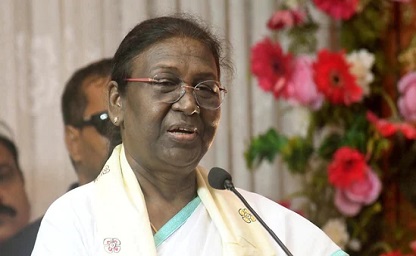 Take a look at the following

So, these are the Presidents of India from 1947 to 2022. Take a look at the articles above to enhance your knowledge of the same.

Who is the first citizen of India?

The first citizen of India is the President because he or she represents our country. He is the constitutional head of the nation, and all executive decisions are taken in his name.

Who was the first President of India?

Dr. Rajendra Prasad was the First President of India. He took oath

Who is the first woman President of India?

On 25 July 2007, Pratibha Patil took the oath as India's first woman President. She is the 12th President of India.

How many Presidents are there in India until 2022?

Since 1950, India has had 14 full-time Presidents. The 14th President of India is Shri Ram Nath Kovind.

Who is the current President of India?

Shri Ram Nath Kovind is the current President of India.
Get the latest General Knowledge and Current Affairs from all over India and world for all competitive exams.