Explained: How China is using Sand Dredger as a weapon against Taiwan?

In this article, we have explained how China is using sand dredging ships as a weapon against Taiwan, initiating so-called grey-zone warfare. 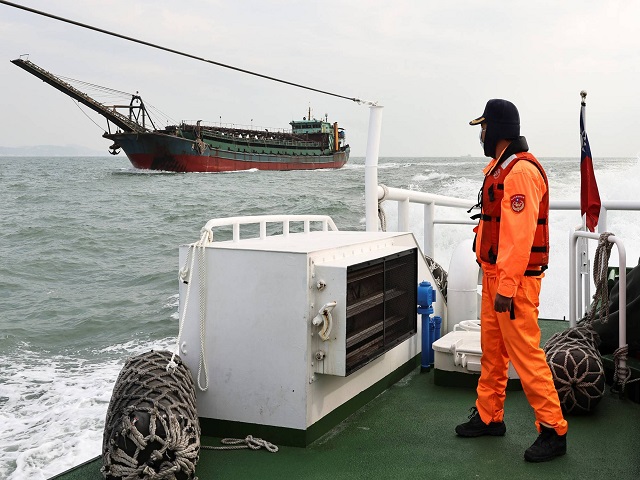 China is waging a new type of war against Taiwan through 'Sand Dredger'. In view of this, Taiwan’s civilian-run Coast Guard Administration is conducting round-the-clock patrols to repel the Chinese vessels.

"They think this area is part of China’s territory. They usually leave after we drive them away, but they come back again after we go away," Taiwanese Coast Guard Commander Lin Chie-ming.

While patrolling in Matsu Islands, Taiwanese Coast Guard Commander Lin Chie-ming was on the lookout for Chinese sand dredging ships that were encroaching on the waters controlled by Taiwan. After 30 minutes of patrolling, his nine men crew spotted two 3,000-ton dredgers that were dwarfing their 100-ton vessel and were parked outside Taiwan's waters. The names were not clearly displayed on the dredgers, making them hard to identify. Upon spotting Taiwanese patrolling boat armed with two water cannons and a machine gun, the dredgers headed back towards the Chinese coast.

As per Taiwanese officials, China aims at pressuring Taiwan by tying down the island's naval defences and undermining the livelihoods of Matsu residents.

As per Government officials, the coast guard has faced hundreds of Chinese vessels-- ranging in size from 1,000 to 3,000 tons in and around the island's waters-- and is always on the lookout for Chinese sand dredging ships.

China has also been dredging in the shallow waters near the median line of the Taiwan Strait-- an official buffer that separates China and Taiwan.

Since June 2020, Chinese dredgers have been swarming around the Matsu Islands and scooping up a huge amount of sand from the ocean bed for the construction projects in China.

As per the Taiwanese officials and Matsu residents, sand dredging by Chinese vessels has disrupted the local economy,  along with damaging marine life, undersea communication cables, and intimidated residents and tourists to the islands.

In 2020, the sand dredgers damaged undersea communication cables between Nangan and Juguang (isle in the Matsu group)-- disrupting the mobile phone and internet services in the area. Around T$60 million were spent by state-run Chunghwa Telecom to fix cables. Local fishing boats were also hired to conduct daily patrols to ensure the safety of the cables.

Between June and December 2020, around 240 Chinese sand dredging and transport vessels were expelled by the Matsu coast guard. As per several reports, a 560% jump is noted in the Chinese vessels that were expelled in 2020 as compared to 2019.

In some standoffs, Taiwanese coast guard used water canons at the Chinese ships in an attempt to drive them away. In 2020, Taiwan impounded 4 Chinese vessels and detained 37 crew members. Of the said number, 10 were sentenced to six months of jail term while others are still under trial.

Additionally, Taiwan is beefing up its coast guard to head off the threat posed by Chinese vessels. In 2020, Taiwanese President Tsai Ing-wen commissioned into service the first of a new class of coast guard vessel, based on the design of an aircraft-carrier killer-- a missile boat for the navy.

As per Taiwanese President Tsai Ing-wen, more than 100 new coast guard boats will be built in the next 10 years in order to enforce a crackdown with 'no mercy' on Chinese dredging in Taiwan waters. Amid this, larger patrol boats have been sent to temporarily reinforce the coast guard in Matsu. At present, around 117 members are conducting 24-hour patrols.

A significant drop has been noticed at the end of 2020, as winter weather brought rougher seas, making sand dredging difficult. However, local residents fear that dredgers will be back once the season changes.

It is well established that sand dredging is just a grey-zone strategy that is used by China to put pressure on Taiwan-- exhausting Taiwan without actually restoring to open battle. For years now, China is involved in illicit activities to wear down the island of around 23 million residents.

In its latest tactics, the People's Liberation Army (Chinese military) has been dispatching warplanes in menacing forays towards the island. This has placed an onerous burden on the Taiwanese air force as its military aircraft have been scrambling on a daily basis to head off the threat posed by China.

According to Taiwanese military officials, China’s grey-zone tactics are meant to drain the resources and erode the will of the island’s armed forces. They are making such harassment routinely so that the world grows inured to it.

It can be said that China’s sand dredging is part of their psychological warfare against Taiwan and is similar to what they are doing in Taiwan’s southwestern airspace.

China's Response to the claims made by Taiwan

As quoted by Reuters, China’s Taiwan Affairs Office issued a statement that Taiwan's claims are baseless-- China is using sand dredging boats to engage in illegal operations near Matsu Islands and the median line of the Taiwan Strait. However, it has stated that it has taken several steps to stop illegal sand dredging.

The statement further added that Taiwan is an inseparable part of China and Taiwanese authorities are using their claims of control over the waters near the islands to detain mainland boats, resorting to dangerous and violent means in their treatment of mainland crews.

The Matsu Islands are islands group close to the Chinese coast that Taiwan has governed since 1949. After losing the Chinese civil war, the defeated Republic of China under Chiang Kai-shek fled to Taiwan. The Matsu, Kinmen and Pratas island groups lie several hundred kilometres from mainland Taiwan. These islands are isolated and have less Taiwanese military presence making them prone to a Chinese attack.

Matsu is nine kilometres from the Chinese coastline at the closest point. China doesn't officially recognize any claims of sovereignty by Taiwan. The island has a total of 9 coast guard ships by the Taiwan Government ranging from 10 to 100 tons.

From the late 1950s to the late 1970s, China occasionally bombarded the Matsu Islands with artillery shells. The remnants of that era are still visible across the island group-- old air-raid tunnels and anti-Communist slogans on the rugged cliffs of Nangan island.

At present, Matsu is a popular tourist destination and its picturesque old-stone homes have been turned into fashionable guest houses.

China's new dam on Brahmaputra River: All you need to know about the Yarlung Zangbo river hydropower project