Education: Graduated, Bachelor of Administrative Sciences in 2012. (University of Tampere)

Sanna Marin is the child of same-sex parents. She is married to her long-time boyfriend Markus Räikkönen. Sanna is a mother of one child also. 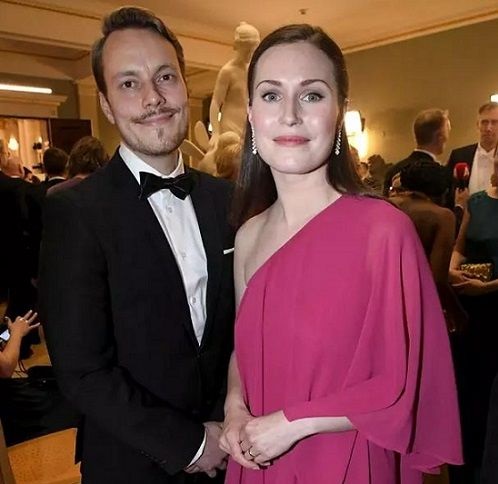 (Sanna with her husband)

The Political career of Sanna Marin

Sanna Marin has completed her graduation in Bachelor of Administrative Sciences from the University of Tampere in 2012.

Sanna Marin was elected to the Parliament of Finland in 2015 and repeated the same in June 2019 and became the Minister of Transport and Communications.

The current Prime Minister Antti Rinne has resigned from the post because he could not prove his majority in the parliament.

Rinne's resignation prompted the Social Democratic party to make the next government with the help of other parties I.e. Center Party, the Greens, the Left Alliance and the Swedish People's Party.

Finland's Social Democrats has elected 34-year-old Sanna Marin to lead the coalition government. So she is all set to become the youngest Prime Minister of Finland. She would also be the country’s third female Prime Minister ever.

Marin would surpass the record of Ukraine's Prime Minister Oleksiy Honcharuk, who is currently 35.

Worth to mention that the other youngest Prime Minister/Head of the world includes; Oleksiy Honcharuk (35) of Ukraine, Kim Jong-un (35) of North Korea and Jacinda Ardern (39) of New Zealand.

So this the important information about the world's youngest Prime Minister Sanna Marin. To read such more articles click on the link given below.