Top 10 Deadliest Fish in the World

The ocean is perhaps the most surprising place on the planet. There are incredibly fascinating and dangerous creatures living there. Here is a list of the top 10 deadliest fish in the world.

The ocean is home to a vast array of creatures, many of which are harmless to humans. Approximately 95% of the ocean is unexplored, so we have no idea what kind of and how many horrible and dangerous creatures are lurking in the depths. But, what we do know from the 5% of the discovered oceans is that some oceanic species are incredibly dangerous.

There are also a number of deadly fish in other large waterbodies that can pose a serious threat to swimmers, divers, and fishermen.

These species can cause serious injury or even death. In this article, we will take a look at some of the deadliest fish found in the world's different waterbodies, including their characteristics, habitats, and the risks they pose to humans.

Top 10 Deadliest Fish in the World 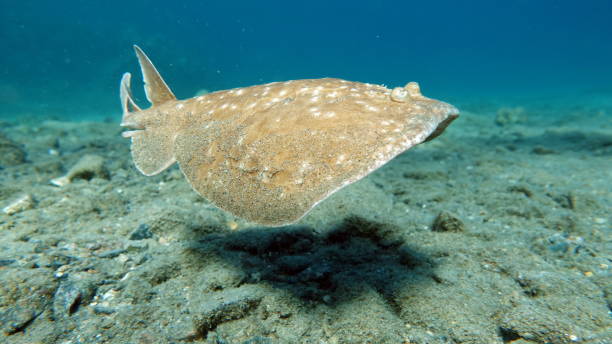 Electric rays, also known as numbfish or torpedo rays, are a group of fish that can produce electric shocks to stun prey or defend themselves. These shocks are generated by specialized cells called electrocytes, which are found in the electric organ located in the fish's head. Electric rays are typically found in coastal waters and can range in size from a few inches to several feet in length. They are generally not considered dangerous to humans but can deliver a painful shock if mishandled. 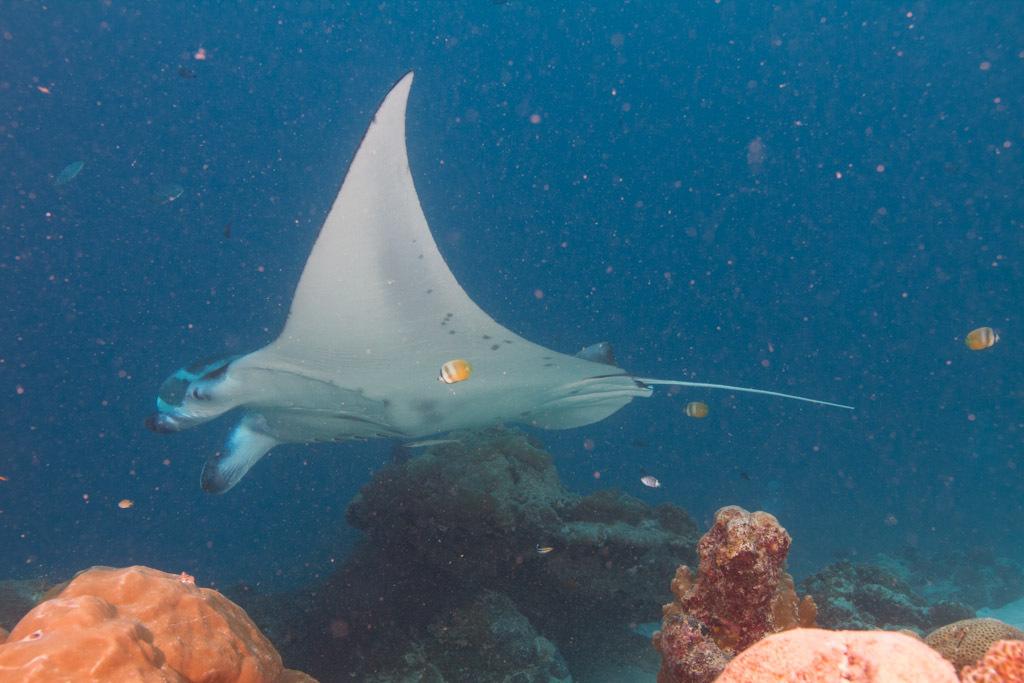 The Atlantic manta ray, also known as the giant oceanic manta ray, is a species of marine ray that is found in the Atlantic Ocean. They are the largest species of ray, with a wingspan that can reach up to 23 feet (7 meters). They are generally peaceful and are often seen swimming near the surface of the water. They feed mainly on plankton and small fish. They are not considered to be dangerous to humans and are often sought out by divers for their gentle nature. However, due to overfishing and habitat destruction, the Atlantic manta ray is endangered. 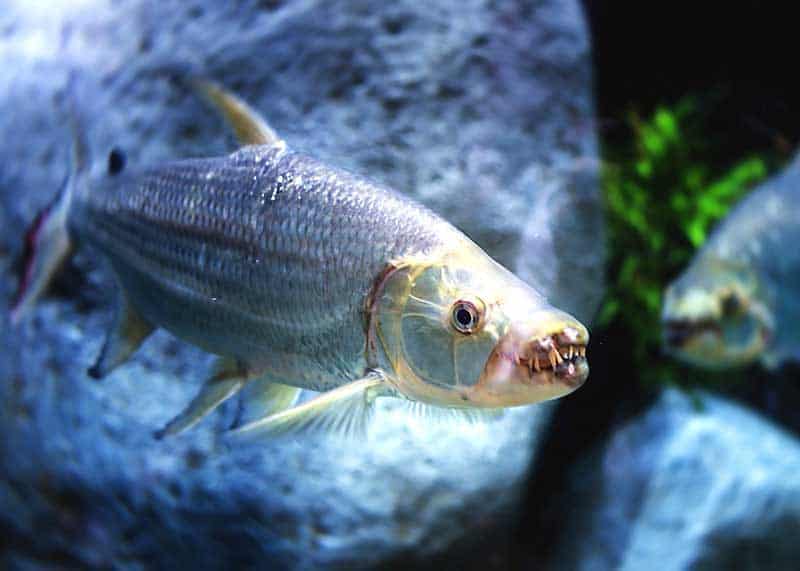 Tigerfish are a group of freshwater fish that are native to African rivers and lakes. They are known for their sharp teeth, which resemble those of a tiger, and their aggressive behavior. Tigerfish can grow up to 4 feet in length and are a popular game fish. They are predatory fish, feeding on other fish and invertebrates. They are also known for their strong fighting ability when caught on a line, making them a challenging catch for anglers. They are also considered a delicacy in some parts of Africa. 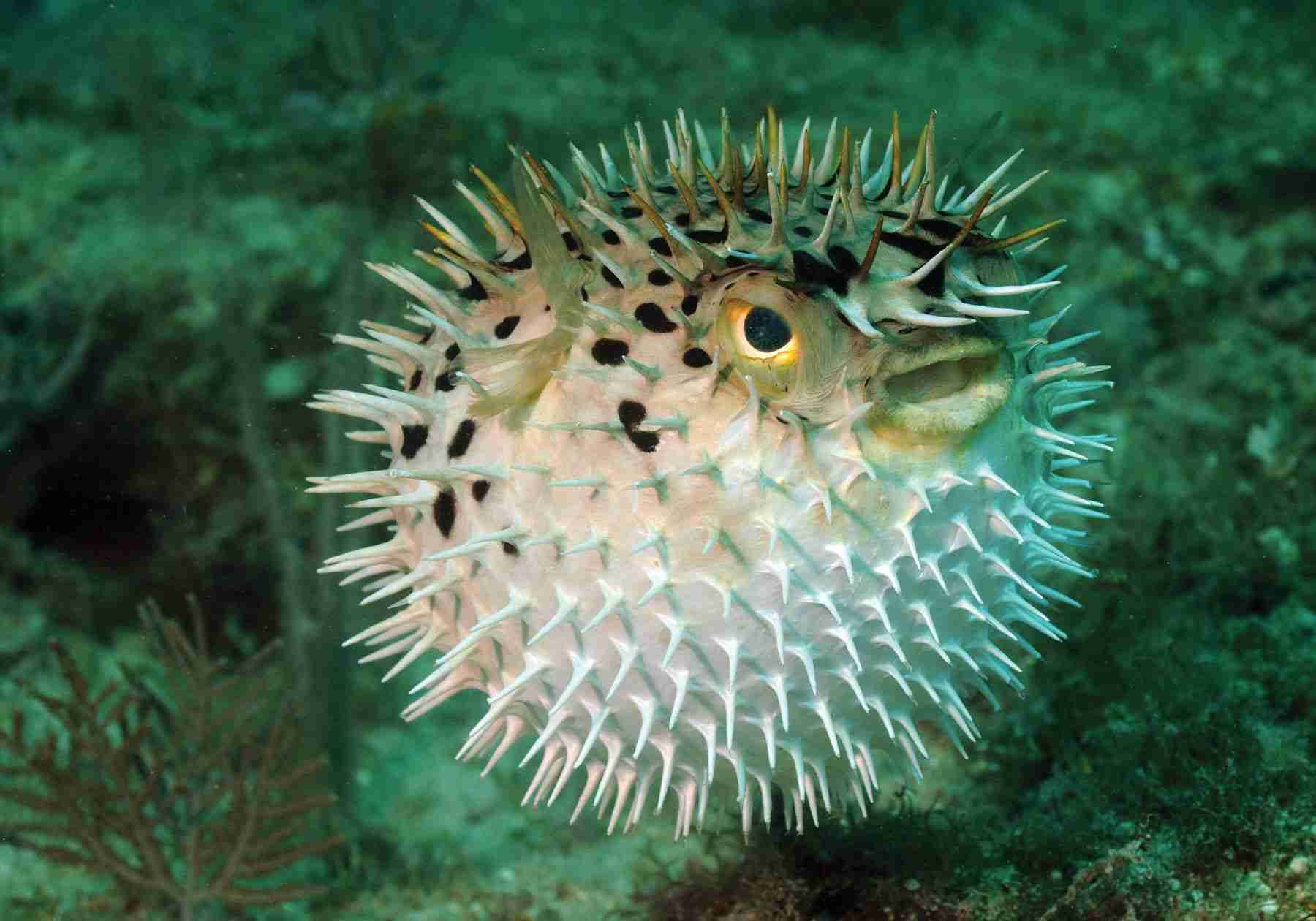 Pufferfish, also known as blowfish or fugu, are a type of fish that have the ability to inflate themselves when threatened. They do this by swallowing water or air, which causes their bodies to expand and makes them difficult for predators to swallow. Pufferfish are found in warm and temperate waters around the world and come in many different shapes and sizes. Some species of pufferfish are highly toxic and are considered to be a delicacy in certain parts of the world, but they require special preparation to remove the toxic parts before consumption. Eating improperly prepared pufferfish can cause serious illness or even death. Despite this, pufferfish are also kept as pets in aquariums and are considered by some to be a symbol of good luck. 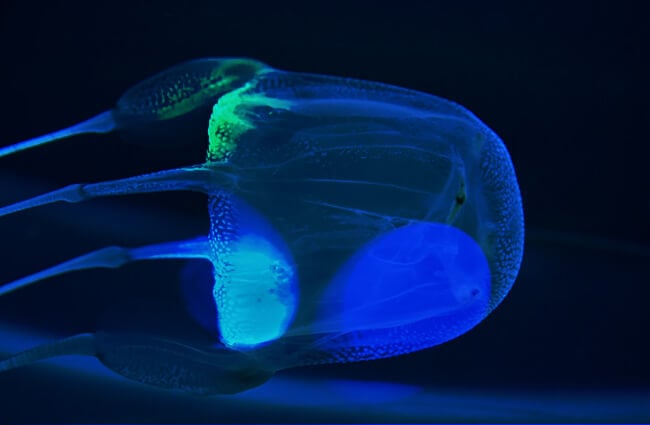 Box Jellyfish, also known as Sea Wasps or Marine Stingers, are a type of jellyfish that are found in the coastal waters of the Pacific and Indian Oceans. They are known for their venomous tentacles that can cause severe pain and even death. They typically have a transparent or semi-transparent bell that can reach up to 30cm (1 ft) in diameter and long, trailing tentacles that can reach up to 3m (10 ft) in length. Although fatalities from box jellyfish stings are rare, it is considered to be one of the most venomous animals in the world. 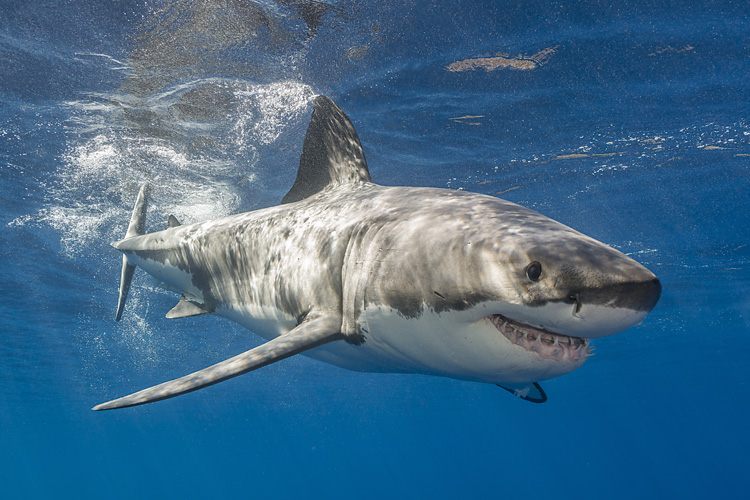 Great White Sharks are considered to be one of the most dangerous sharks in the world. They are known for their large size, powerful jaws, and sharp teeth. They are apex predators and are capable of attacking and killing marine mammals, including seals, dolphins, and even smaller whales. Although Great White Sharks are responsible for a relatively small number of human fatalities, their potential to cause harm is significant. They are known to be curious and can approach boats and swimmers, and in some cases, they have bitten humans. However, unprovoked attacks on humans are rare and typically occur in specific areas known as "hot spots" where the shark population is high and human activity is also prevalent.

Related | Megalodon, The Giant Prehistoric Shark: Everything You Need To Know. 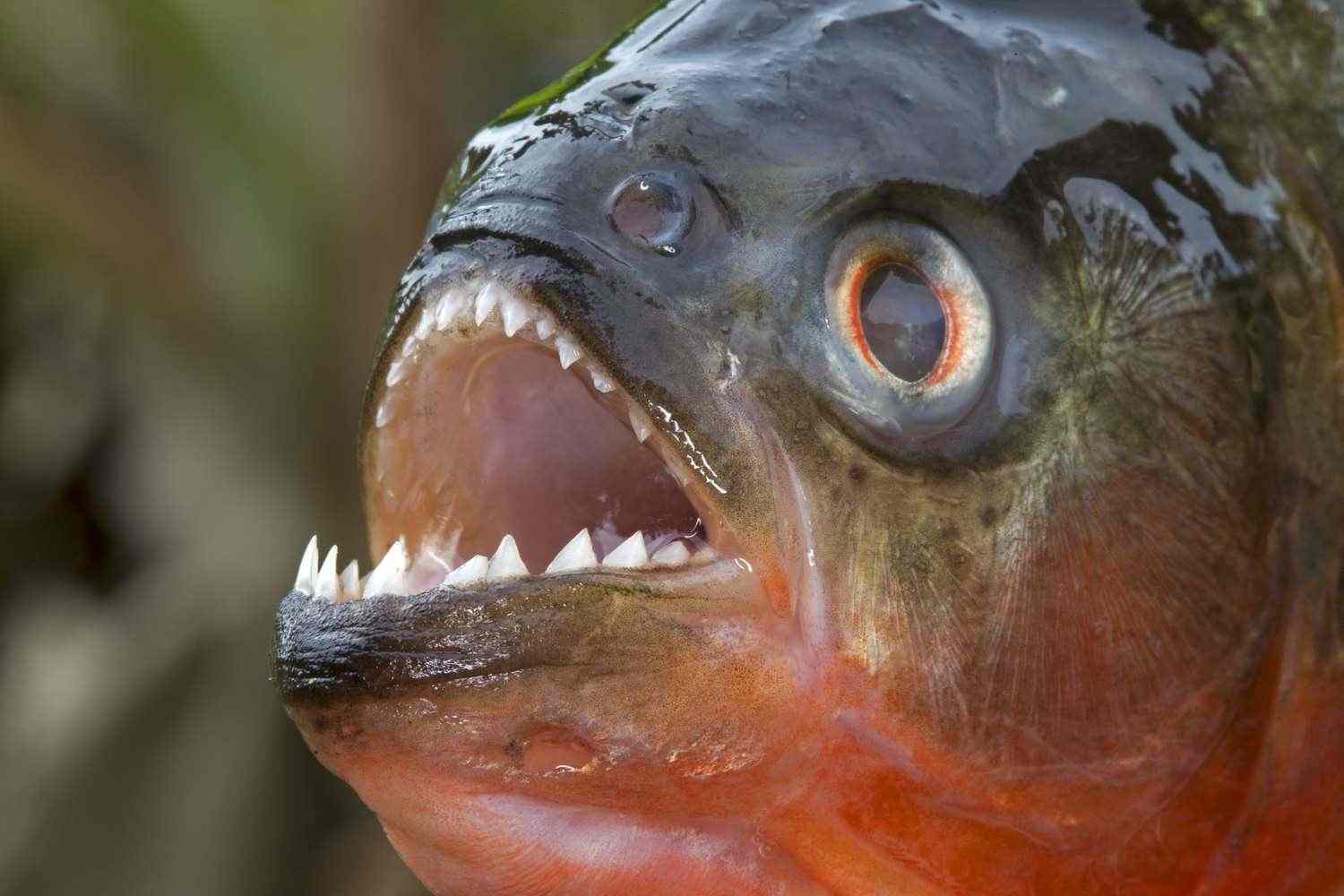 Piranhas are a group of freshwater fish that are native to South America. They are known for their sharp teeth and aggressive behavior, which make them efficient predators in their freshwater habitat. They are typically found in rivers and streams, but can also be found in lakes and flooded forests.

Piranhas are opportunistic feeders and will eat a wide variety of prey including fish, crustaceans, and insects. They are also known to feed on dead animals and plants. They have a reputation for being aggressive and dangerous to humans, but unprovoked attacks on humans are extremely rare. However, during droughts or low water levels, piranhas may become more aggressive as they compete for limited food resources. 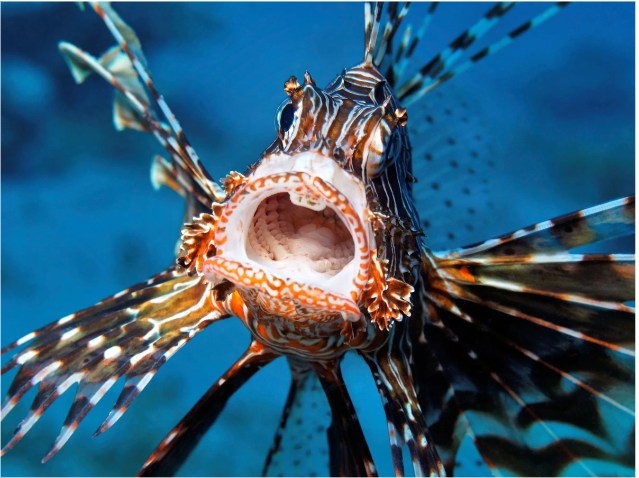 Lionfish are a group of venomous fish that are native to the Indo-Pacific region. They are known for their distinctive appearance, with long, flowing fins and venomous spines. They are typically found in coral reef environments, but can also be found in estuaries and mangroves. Lionfish are carnivorous and primarily feed on small fish and crustaceans.

Lionfish are considered an invasive species in many parts of the Caribbean, Florida, and the Gulf of Mexico, as they have been introduced to these areas and have no natural predators.

Although lionfish venom can cause severe pain and swelling, fatalities from lionfish stings are extremely rare. However, it is important to handle lionfish with care as their venomous spines can cause injury. Lionfish hunting and consumption have been promoted as a way to control their population in the invasive areas 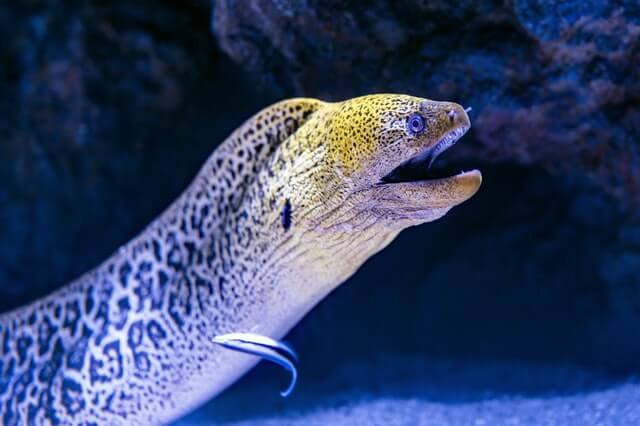 The Electric Eel is a species of fish that is native to the rivers of South America. They are known for their ability to generate powerful electric shocks, which they use for hunting and defense. Electric eels can grow up to 8 feet in length and can produce a shock of up to 600 volts, which is strong enough to stun prey and even humans.

Electric eels are obligate air breathers and need to surface to gulp air. They are carnivorous and feed on a variety of prey including fish, amphibians, and crustaceans. Electric eels have a specialized electric organ made up of electrocytes, which are cells that can generate an electric charge. They use this organ to locate, hunt and stun prey.

Although electric eels are not considered dangerous to humans, their electric shocks can cause injury and should be handled with care. 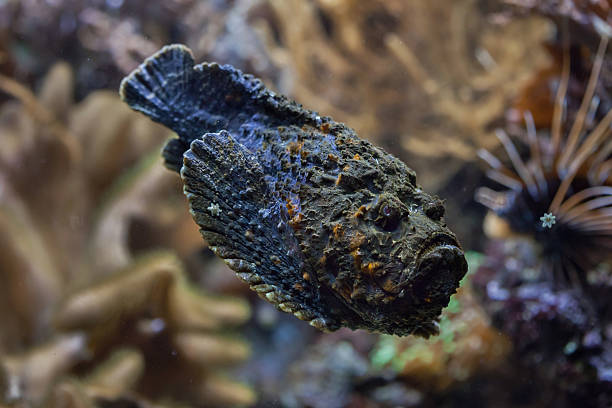 The stonefish is a type of venomous fish that is found in the coastal waters of the Pacific and Indian Oceans, particularly in the Coral Sea and the Great Barrier Reef. They are known for their ability to camouflage themselves and blend in with their surroundings, making them difficult to spot. Stonefish are known for their venomous spines on the dorsal fin, which can cause severe pain and even death if left untreated. Their venom contains a potent cocktail of toxins that can affect the heart, skin, and nervous system. The venom can be delivered via a sting from their dorsal fins, which can happen quickly and unexpectedly, especially if stepped on.

Although fatalities from stonefish stings are rare, it is considered to be one of the most venomous animals in the world. It is important to handle stonefish with care and to seek immediate medical attention if stung.

Also Read | List Of Top 10 Cat Breeds In The World

Top 10 Deadliest Fish In The World

The ocean and other waterbodies are full of dangerous and deadly creatures lurking in the depths. Here is a list of 10 of the top deadliest known fish found in the world.

While some fish may have a reputation for being dangerous, it is important to remember that most fish will not harm humans unless they feel threatened. It is also important to be aware of one's surroundings and to follow safety guidelines when swimming or diving in areas where potentially dangerous fish may be present. With that being said, by understanding the characteristics and behaviors of these deadly fish, like the Lionfish, stone fish, great white, and piranha, we can take the necessary precautions to avoid any harm and appreciate the beauty and diversity of marine life.

Tired of monotony? Try our Brain Teaser IQ Test: We Bet You Can’t Find The Egg, Glove, And Fish in The Living Room In 7 Secs!

What fish is worse than a piranha?

The deadliest fish in the world is the stonefish that is found in the coastal waters of the Pacific and Indian Oceans, particularly in the Coral Sea and the Great Barrier Reef.

What is the second deadliest fish?

The Electric Eel is the second most dangerous fish in the world. They can produce a shock of up to 600 volts, which is strong enough to stun prey and even humans.

What is the most poisonous fish to humans?

The stonefish is the most poisonous fish and one of the world's most venomous animals.
Get the latest General Knowledge and Current Affairs from all over India and world for all competitive exams.