Megalodon, simply known as the Meg, was the fiercest and the largest aquatic predator to have ever lived on Earth. The prehistoric shark went extinct around 3.6 million years ago.

Megalodon (scientific name: Carcharocles megalodon) is a member of the extinct species of megatooth shark (scientific name: Otodontidae) that went extinct around 3.6 million years ago. Megalodon, simply known as the "Meg," was the largest species of fish to have ever existed. The giant shark is thought to have been a cosmopolitan species (it could be found anywhere on the earth) that existed from around 15.9 Ma (Mega Annum) to about 2.6 Ma (Pliocene), based on the global distribution of its fossil.

The Meg was a continental species of shark. Its fossils have been recovered from various places around the world, particularly along the coastlines and continental shelf zones of all continents except Antarctica. It mostly appeared in subtropical and temperate latitudes. It has been discovered at latitudes as high as 55° N and is said to have endured temperatures between 1 and 24 °C. It lived in a variety of aquatic habitats and had a nomadic lifestyle. 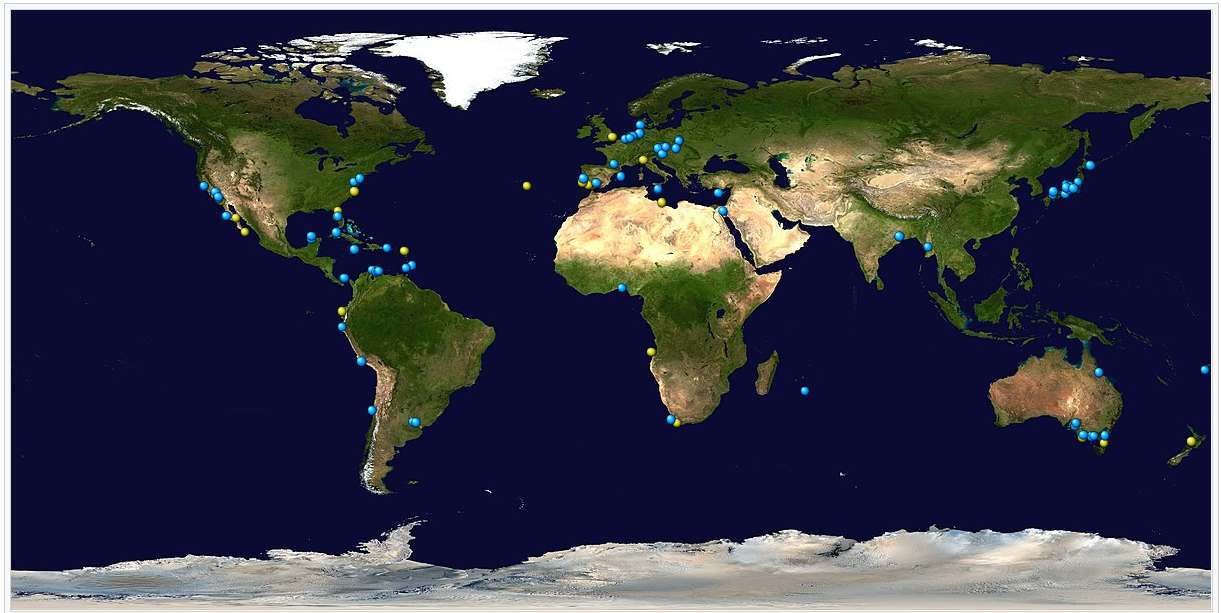 Megalodon's distribution grew over the course of the Miocene, encompassing the waters off the coasts of northern Europe, South America, southern Africa, New Zealand, and east Asia, in addition to pockets in the Caribbean and Mediterranean seas, the Bay of Bengal, and along the coasts of California and southern Australia. However, its distribution substantially shrank during the Pliocene Epoch, and by the end of the epoch, the shark was extinct.

The megatooth shark is the largest shark that has ever existed on the planet. Based on the size and shape of its teeth, it was assumed to be an apex predator with a length of up to 18 meters. To estimate its body length, scientists have used the quantitative correlation between the size of Megalodon's fossil teeth and the teeth and body mass of contemporary white sharks and its other living relatives.

Researchers conclude that mature Megalodons had an average length of 10.2 meters (33.5 feet), with the largest individuals reaching up to a length of around 18 meters (59 feet). 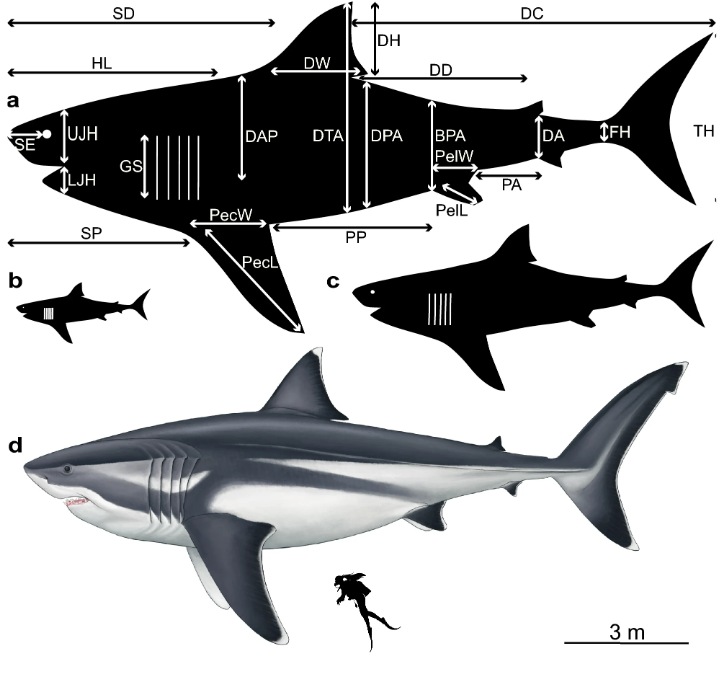 Some researchers and scientists say that the largest specimens of the prehistoric giant may have been up to 25 meters (82 feet) long.

Megalodon was able to entirely swallow prey the size of apex predators of today while swimming at speeds faster than any shark species does now.

The longest known Megalodon tooth is roughly 7 3/8 inches long. Few specimens have been discovered with teeth longer than 7 inches.

Megalodon's teeth are triangular, jagged, and symmetrical, just like those of contemporary white sharks. They are larger and thicker, with uniform spacing between each tooth's jagged edges, and have a bourlette (a deeper, V-shaped area close to the tooth's base) compared to modern white shark teeth.

It has been hypothesized that Megalodon preferentially preyed on small- to medium-sized cetaceans, such as the extinct Piscobalaena Nana and Xiphiacetus Bossi. Species related to modern humpback whales (Megaptera novaeangliae) or blue whales (Balaenoptera musculus) were among its larger prey. 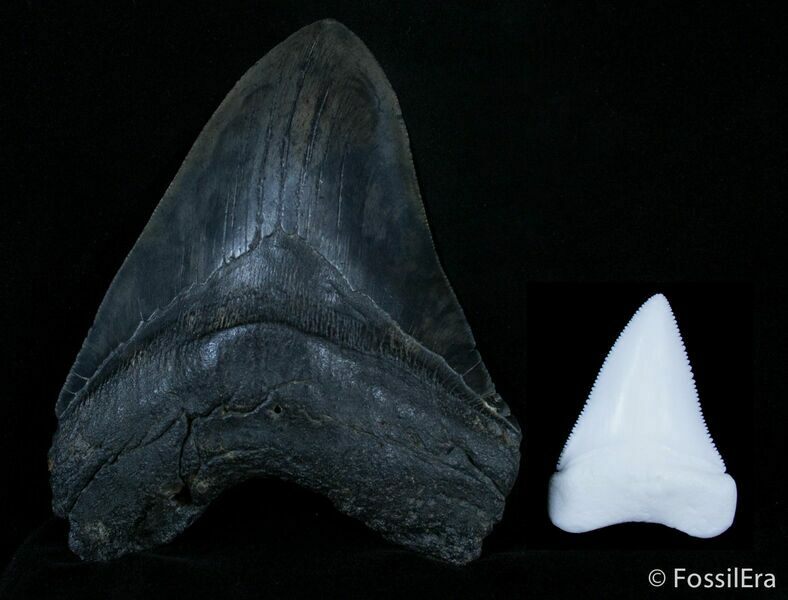 Megalodon had a vicious bite that was several times bigger than the bite of an average-sized white shark at 3 meters (approximately 9.8 feet).

There is some confusion regarding the existence of the prehistoric giant today. The truth is, Megalodon went extinct at the end of the pliocene. The confusion among the general population stems from the fact that in 2013, Discovery aired a documentary with the title “Megalodon: The Monster Shark Lives,” during Shark Week. The documentary which was a collection of clips showing the evidence of the existence of the shark was also posted on YouTube and it amassed millions of views in a matter of days. Owing to the Discovery network’s credibility, people started believing that Megalodon was still alive and thriving somewhere in the depths of the ocean.

However, it was a Mockumentary, a fictional video made for the sole purpose of entertaining the masses.

So, no, Megalodon is not alive today.

During the Miocene and Pliocene epochs, the Megalodon was the devil of the seas. Its extinction has long been a mystery. Numerous factors could have had a role in the extinction of the megalodon. But the most popular theory is the cooling of the planet.

Since the adult sharks were reliant on tropical waters, a considerable loss of habitat was probably caused by the drop in ocean temperatures. The megalodon's prey might have gone extinct as a result, or they might have adapted to the cooler waters and moved to an area where the sharks could not follow.

The Megalodon acted as a transoceanic superpredator and played a significant role in the ecosystem. Therefore, its extinction probably had a major impact on hierarchical food webs and global nutrient transmission.

You May Also Like | Chocolate likely to get extinct by 2050

How long is the Meg in real life?

The megatooth shark is the largest shark that has ever existed on the planet. Based on the size and shape of its teeth, it was assumed to be an apex predator with a length of up to 18 meters.

Has a megalodon ever been found?

Megalodon was the apex predator, the devil of the oceans, and it dominated the depths when it was alive. However, the apex predator went extinct around 3.6 million years ago. Its fossils have been found in various places around the world, particularly along the coastlines and continental shelf zones of all continents except Antarctica. It mostly appeared in subtropical and temperate latitudes.

Is there still 1 megalodon alive?

No, there is some confusion today regarding the existence of the prehistoric giant. The truth is, Megalodon went extinct 3.6 million years ago.
Get the latest General Knowledge and Current Affairs from all over India and world for all competitive exams.