“Anthropocene” a new chapter in the Earth’s geological history

Human activity has fundamentally changed our planet. Rising global temperatures, sea levels, depleting ozone layer and acidifying oceans are the result of human activity. Scientist’s team have voted to declare “Anthropocene as a new chapter in the Earth's geological history. They believe that we are living in a new chapter in Earth's story and entered in a new era. Let us read more about Anthropocene, why it matters and what is golden spike.

Anthroprocene epoch is the interval of geological time which makes the third worldwide division of the Quaternary Period due to the collective activities of human beings and altered the surface of the Earth, oceans, atmosphere and system of the nutrient cycle.

According to the Working Group on the Anthropocene (WGA), our impact on the Earth is so significant that they have declared an entirely distinct geological epoch known as Anthropocene. Some group of experts have presented the recommendation to the International Geological Congress on 29 August, drawing on a study published in Science in January. The majority of the group have voted to formally designate the Anthropocene and recommend that its start date should be around the 1950s.

This is first time in the geological history that human beings become the primary agents of change on a planetary scale which gives rise to a new epoch Anthropocene.
Anthropocene is derived from the Greek which means the "recent age of man" human and stands alongside other geological epochs like Holocene which began around twelve thousand years ago that is at the end of the last Ice Age.

What is an epoch?
Epochs are defined on a global level, and their beginning and end are dated to specific points in time. So, we can say that epoch form part of the Earth's official timeline. According to the International Commission on Stratigraphy, all 4.6 billion years are split into Eons, Eras, periods, Epochs and Ages. Hominins first appear by around 6 million years ago, in the Miocene epoch, which ended about 5.3 million years ago. The evolutionary path takes us through the Pliocene, the Pleistocene and finally into the Holocene which starts from about 12,000 years ago. So, the Anthropocene would follow the Holocene.

What is ‘Meghalayan Age’ in Earth’s history?

When did Anthropocene begin? 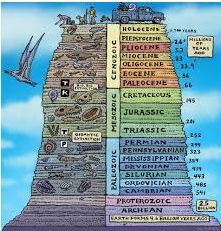 Source: www.wbur.org
It is a subject of heated debate among the geologists, anthropologists and other community of scientists. According to the International Commission on Stratigraphy, a start date must be recognised globally and can be defined stratigraphically by biological, chemical or other types of markers. Some geologists say that it is impossible to identify. Some argue that Anthropocene began with the advent of agriculture because some agricultural related activities like deforestation rise in carbon dioxide level and methane as early as 8000 years ago. Some believe that it was not until the industrial revolution, some proposed that as the beginning of the nuclear age in the mid-1940s. As in this period human activity showed dramatic changes from water use to fertilizer consumption to globalisation.

What is golden spike?
Now we know that Anthropocene is a new epoch in which Earth is significantly altered by the human activities. And new epoch has yet to be declared and is now consider it distinct from the Holocene.
The next step of the Working Group of Anthropocene (WGA) is to identify a "golden spike". It is a global marker in the environment that indicates the start of the new age. This marker should be visible years after years or even after millions of years. This will help to identify the start of the Anthropocene.

Let us understand with the help of an example: The end of the Cretaceous epoch is defined by the presence of iridium in the sediment around the world. It spread due to meteorite that signalled the end of dinosaurs. So, the panel is split on what they believe the best spike will be for Anthropocene. It may be from the fallout of nuclear bomb tests in the 1950s. This could be found in ice layers or lake sediment, stalagmites or stalactites. Others say that it may be plastics, concrete particles or soot and pollution from power stations. Some scientists says that fossils from domestic chickens be a defining marker which could define Anthropocene.

Why this matters?
According to WGA, we are now living in a new geological age and it is a start reminder of our impact on earth. Scientists and researchers of this group believe that human being activities have set the system of Earth on different trajectory. If these changes continue then huge impact will be seen in the environment.

So, we can say that Anthropocene highlights the scale of our impact on Earth. It shows that the impact of our activities is global and irreversible which has generated a new geological epoch. It is necessary to think about the global issues which affect our planet like climate change, loss of biodiversity, environmental degradation, deforestation etc. which are being affected by human influence. The Anthropocene allows us to re-examine the relationship between humans and the rest of the natural world.