What is Atal Bhujal Yojana?

Atal Bhujal Yojana was launched on 25 December 2019 by Prime Minister Narendra Modi to improve groundwater management in the country. The scheme will be implemented through Jal Jeevan Mission (JJM). Let us have a look at Atal Bhujal Yojana and how it will help in solving the concerns related to groundwater resources. 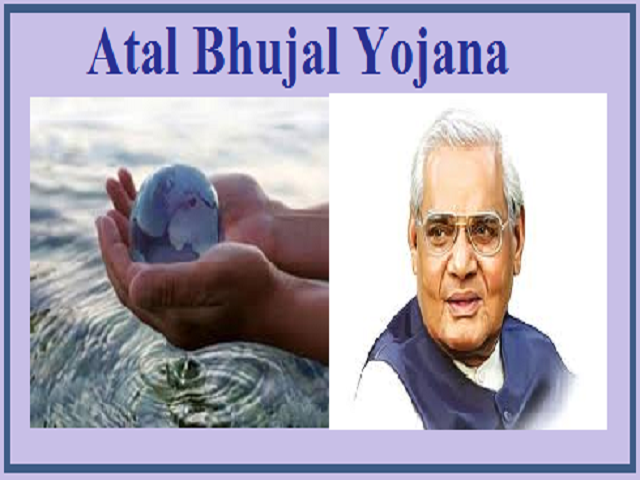 The Strategic Tunnel under Rohtang pass was also named after Vajpayee in an event held in New Delhi to provide drinking water to every household. Atal Bhujal Yojana will improve groundwater management in the country.

As we know that the former Prime Minister Atal Bihari Vajpayee's vision was to ensure water for all. Therefore, to pay tribute on his 95th birth anniversary, Atal Bhujal Yojana was launched. What are the reasons behind the depletion of groundwater resources? The scheme is also known as Atal Jal which is a World Bank-funded, central scheme to improve groundwater management. In June 2018, it was approved by the World Bank Board.

Before discussing in detail about the Atal Bhujal Yojana, it is necessary to understand about groundwater and its management. How much do we depend upon groundwater?

The water that is present beneath the surface of the Earth in soil pore spaces and the fractures of rock formation is known as groundwater. It is used for drinking purposes. The largest use for groundwater is to irrigate the crops.

A unit of rock or an unconsolidated deposit is known as aquifer when it can yield a usable quantity of water. It is made up of gravel, sand, sandstone or fractured rock, like limestone. Water moves through these materials because of large connected spaces that make water permeable. The area where water fills the aquifer is known as the saturated zone or saturation zone. The water table is the top of this zone. We can say that the water table may be located a foot below the ground's surface or it can sit hundreds of feet down.

Water from the aquifers brought naturally through spring or can be discharged into lakes and streams. With the help of wells also groundwater can be used. It comes to the surface through wells with the help of pump.

Note: Shallow wells may go dry if the water table falls below the bottom of the well. Also, some wells are known as artesian wells that do not need pump because the natural pressure is so high that it forces the water up and out of the well.

How are we depended on groundwater?

In nowadays era, groundwater is an important source of water in India that accounts for 63% of all irrigation and over 80% of the rural and urban domestic water supplies.

According to the UN report, India is the biggest extractor of groundwater that is annually it extracts around 245 Billion Cubic Meter (BCM) groundwater which accounts for nearly 25% of the total global groundwater abstraction. Let us tell you that annually for irrigation about 222 BCM out of 245 BCM of groundwater are being used while remaining 23 BCM is consumed by the domestic and industrial sector. Therefore, we can say that in massive scale groundwater is used for irrigation by the farmers. Crops like sugarcane, rice that farmers grow needs large amount of water.

Recently a report is published by the United Nations Educational, Scientific and Cultural Organisation (UNESCO) namely World Water Development Report and according to it India is the largest extractor of groundwater in the world. Around 54% of India’s groundwater wells have declined over the past seven years and 21 major cities are expected to run out of groundwater by 2020.

What is the reason behind the decline of groundwater?

The reason behind the decline is over population and irrigation. As population is increasing, demand of food is also increasing and for that farmers have to grow more food and further need water for irrigation which results in the decline of groundwater. Here one thing is to be noted that crops like sugarcane and rice need more water to grow and farmers had grown them in huge quantity which are not required that much. Therefore due to bad management or strategy the index of water are poor. According to NITI Aayog, about 75% of households do not have drinking water at home, nearly 84% rural households do not have piped water access and about 70% of India's water is contaminated. Currently, in the water quality index, India ranked 120 among 122.

The demand of water by 2020 in our country will be increased by twice the available supply which results into severe water scarcity for hundreds of millions and an eventual loss of around 6% of the country's GDP.

So we can say that the reason for depletion is increased demand for water for domestic, industrial and agricultural needs and limited surface water further leads to the over-exploitation of groundwater resources. Also, there is a limited storage facility due to hard rock terrain mainly in central Indian states. In these areas, rainfall is also not adequate. And so groundwater is not able to replenish properly.

So, to solve the problem of groundwater, Government of India on 25 December 2019 launched a scheme to conserve groundwater in regions where there are low water tables. And the scheme is known as Atal Bhujal Yojana.

Now the questions arises what is Atal Bhujal Yojana and its objective?

The Atal Bhujal Yojana is also known as 'Atal Jal' which will improve groundwater management through community participation in identified priority areas in seven States including Gujarat, Haryana, Madhya Pradesh, Maharashtra, Rajasthan and Uttar Pradesh. Therefore, this scheme will work in the regions where there is low water table.

Let us tell you that the scheme is launched on the 95th birth anniversary of the former Prime Minister Atal Bihari Vajpayee.

Who will be benefited with the scheme?

The implementation of the scheme is expected to benefit nearly 8350 Gram Panchayats in 78 districts in the above mentioned States. This yojana will promote panchayat led groundwater management and reflects Bapu's Gram Swarajya ideology. The scheme will be implemented for over a period of five years from 2020-21 to 2024-25. Above mentioned States represent about 25% of the total number of over-exploited, critical and semi-critical blocks in terms of ground water in India.

What will be the cost of the Atal Bhujal Yojana?

The total outlay of the scheme is Rs 6000 crore. 50% shall be in the form of World Bank loan and the remaining 50% shall be through Central Assistance from regular budgetary support.

What are the components of Atal Bhujal Yojana?

Also, Prime Minister Narendra Modi urged farmers to switch over to those crops that use less water and also told people not to waste the precious natural resources in daily household needs. He also stated that several start-ups to come up with technology to ensure minimal use of water for various needs.

Therefore, Atal Bhujal Yojana will be a solution for those regions where water table is low and help in the replenishment of the groundwater.