What is doomsday clock?

The Doomsday Clock is a symbol which represents the likelihood of a man-made global catastrophe. This clock is taken care of by the members of the Bulletin of the Atomic Scientists since 1947. This clock represents the causes responsible for threat to humanity. If this clock shows 12 O’clock at midnight; it means that the world can end anytime.

What is the Doomsday Clock?
The nuclear attack on the 2 cities Hiroshima and Nagashaki (Japan) during the second world war; compelled global scientists to think about the safety of the world.
The discovery of nuclear bomb compelled the scientists to make a list of such innovations of the human being which may cause the destruction of the world.
So scientists made a clock (The Doomsday Clock) which can warn about catastrophic consequences of human activities.
Doomsday Clock is a symbolic clock that reveals the possibility of global catastrophe due to human activities.
or
The Doomsday Clock is a symbol which represents the likelihood of a man-made global catastrophe. This clock is made by 15 scientists including famous scientist Stephen Hawking in 1947.Its original time setting was 7 minutes to midnight (i.e. 11.53 PM) in 1947.

‘If this clock shows 12 O’clock at midnight; it means that the world can end anytime.’

In simple words, this clock represents that the closer the minute hand is to midnight, the closer the world is to disaster. This clock is maintained by the members of the "Bulletin of the Atomic Scientists" since 1947.
The scientists of this organization are attributed for the forward or backward movement of the needles of the clock. When scientists think that humanity is at risk, the needles of the clock are set closer to 12 O'clock and when the danger passes away, the needles are set a few minutes away from the 12 O'clock.
For example, after the two years of nuclear attack on Hiroshima and Nagasaki by the USA; the Doomsday Clock was set at just 7 minutes to midnight i.e. 12 O'clock for the first time.
How many changes have been made in Doomsday Clock till date?
The clock has been set backward and forward 22 times since 1947.

(2). The needles of Doomsday Clock were set at 3 minutes to midnight in 1949 because the Soviet Union tested its first nuclear weapon, officially started the nuclear arms race.

(3). In the year 1953, when America tested its first hydrogen bomb, the time of the clock was just 2 minutes to midnight.

(4). In the year 1969 when the Nuclear Non-Proliferation Treaty (NPT) was signed, the needle of this clock were retracted and set at 10 minutes to midnight.

(5). As of January 2018, the Clock is set at 2 minutes to midnight, due to a war-like situation between USA and North Korea. 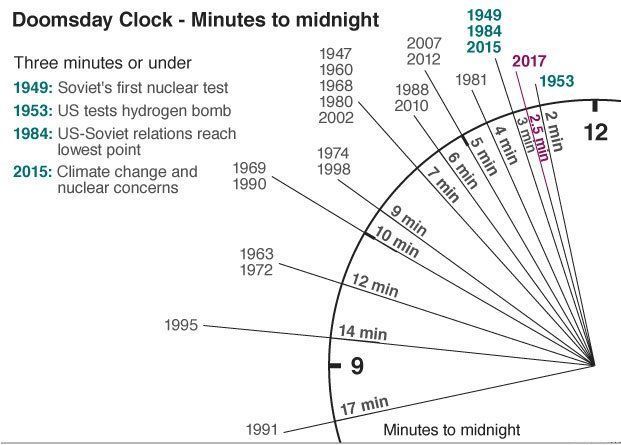 Which factors are responsible for the change in Doomsday Clock?
(1). Nuclear war or its possibility
(2). Climate change
(3). Bio terrorism
(4). Cyber crime
(5). Threats of hacking and artificial intelligence
(6). Inflammatory statements of the global leaders

So that’s the concept of the "Doomsday Clock". Let’s of course hope that this clock will never strike midnight!
If you liked the information provided in this article, do visit the jagranjosh website for more such articles on general knowledge.

7 Countries which are not recognised by the United Nations