What is Ebola Virus: History, Cause, Symptoms, Prevention and Treatment

New Ebola outbreak is detected in Wangata health zone, Mbandaka, in Equateur province in the Democratic Republic of Congo. Do you know what is Ebola Virus, its history, symptoms and treatment? Let us study in detail. 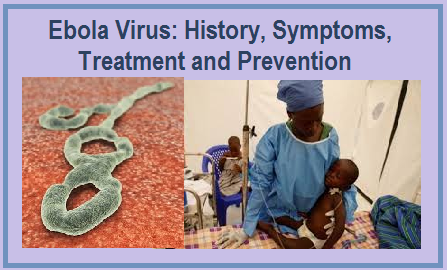 What is Ebola Virus?

The country is already fighting with COVID-19 pandemic and world's largest measles outbreak and now a new Ebola outbreak in north-west Democratic Republic of Congo (DRC). This is the 11th Ebola outbreak in DRC since it was discovered first in 1976 in the country.

What is Ebola Virus?

Ebola is a rare but deadly virus that causes fever, body ache, diarrhoea etc. When it enters the body, it kills cells and also makes some of them to explode. It affects the immune system, causes heavy bleeding inside and outside the body and damages almost every organ. Ebola Virus Disease (EVD) mostly affects people and nonhuman primates like monkeys, gorillas and chimpanzees. It is caused by an infection with a group of viruses within the genus Ebola virus. Let us tell you that Ebola Virus disease is also known as Ebola haemorrhagic fever. No doubt it often causes fatal illness in humans.

What is the origin of Ebola Virus?

In 1976, the first time the Ebola Virus disease appeared in 2 simultaneous outbreaks. First occurred in the Democratic Republic of Congo (formerly Zaire) in a village near the Ebola River, from where it got its name and the second outbreak occurred in South Sudan approximately 500 miles away.  Do you know that the 2014-16 Ebola outbreak in West Africa was the largest outbreak since the virus was first discovered in 1976? The outbreak of Ebola started in Guinea and then moved across land borders to Sierra Leone and Liberia. And the outbreak in 2018-19 in eastern DRC is highly complex affecting public health.

The host of natural Ebola virus belongs to the Pteropodidae family which is a fruit bat. In to the human population, it enters by close contact with the blood, secretions, organs or other fluids of infected animals like fruit bats, chimpanzees, gorillas, monkeys, forest antelope found ill or dead in the rain forest. Human to human transmission by direct contact through broken skin or mucous membranes like from the blood of a person who is sick or has died from Ebola, contaminated objects with body fluids like blood, faeces, vomit from a sick person with Ebola or from the dead body of a person who died from this disease.

The time interval from infection with the virus onset of symptoms is from 2 to 21 days. If a person is infected with Ebola but until and unless symptoms will not arise in a person disease will not spread.

Internal and external bleeding in some cases like oozing from the gums, blood in stools etc.

It can be difficult to clinically diagnose Ebola Virus Disease from other infectious diseases like malaria, typhoid and meningitis.

Below mentioned are some diagnostic methods due to which Ebola Virus infection can be diagnosed:

Let us tell you that Diagnostic tests are also evaluated through the WHO Emergency Use Assessment and Listing process.

WHO has also recommended some current tests that include:

- Rapid antigen detection tests for use in remote settings where NATs are not readily available.

These mentioned above tests are recommended for screening purposes as part of surveillance activities.

The samples that are collected from patients are an extreme biohazard risk. All the specimens collected are packed by using triple packaging system when transported nationally or internationally.

Ebola Virus Disease can be highly contagious. The person becomes contagious when the first symptoms begin to appear like fever until he or she dies. After the death of a person, his or her body is extremely contagious until its cremation or burial. If an individual survives with the Ebola Virus Disease, the person remains contagious for approximately 21 to 42 days after the symptoms abate. It is also said that the Ebola viruses have been detected in the semen of men's for many months and in the eyes of males and females for months but it is not clear yet how much contagious is the virus in these locations.

Treatment of Ebola Virus Disease is often limited which includes:

- Blood transfusions that is replacing blood through transfusions, and treating additional infections that may develop subsequently.

- Treatment for other infections

In the ongoing outbreak of Ebola Virus in 2018-19 in Congo, the first time multi-drug randomised control trial is being conducted to evaluate the effectiveness and safety of the drugs used in the treatment of the patients. The potential treatments are also being evaluated including blood products, immune therapies and drug therapies.

Vaccine rVSV-ZEBOV is being used in the outgoing 2018-1029 outbreak of Ebola Virus Disease in DRC. This vaccine was proved highly protective against EVD in Guinea in 2015.

- The wildlife-to-human transmission should be reduced.

- Risk of human to human transmission should be reduced.

- Certain measures should be taken care like the safe and dignified burial of dead body that suffered from EVD, identifying people who are suffering from EVD and monitor their health for 21 days etc.

- The sexual transmission should also be reduced.

- In 1976, Ebola Virus was first discovered near the Ebola River in Democratic Republic of Congo (DRC).

- Ebola Virus gets its name from the Ebola River which is in one of the villages in the DRC.

- Ebola virus spreads to people through direct contact with bodily fluids of a person who is sick with or has died from EVD.

- Engagement of Community is the key to successfully controlling the outbreaks.

- Vaccines to protect Ebola Virus Disease are under development.

- There is 6 genus of Ebola Virus and of these only four (Ebola, Sudan, Tai Forest, and Bundibugyo viruses) cause disease in people. Rest virus is known to cause disease in nonhuman primates and pigs but not in humans.

So, now you may have come to know about the Ebola Virus Disease, how is it caused, its symptoms, treatment, prevention and control.