What is HSTDV technology and why does it matter for India?

HSTDV technology: The successful demonstration of the hypersonic air-breathing scramjet technology by the DRDO with the flight test of Hypersonic Technology Demonstrator Vehicle (HSTDV) from Dr. APJ Abdul Kalam Launch Complex at Wheeler Island, off the coast of Odisha was done on 7 September, 2020.

Prime Minister Narendra Modi congratulates DRDO for the successful flight of the Hypersonic Test Demonstration Vehicle. He also said that the scramjet engine developed by our scientists helped the flight achieve a speed 6 times the speed of sound! Very few countries have such capabilities today.

No doubt it will lead to the development of hypersonic cruise missiles and vehicles in the future. According to DRDO Chairman G. Satheesh Reddy “It’s a major technological breakthrough in the country. This testing paves the way for the development of more critical technologies, materials, and hypersonic vehicles. This puts India in a select club of nations that have demonstrated this technology." 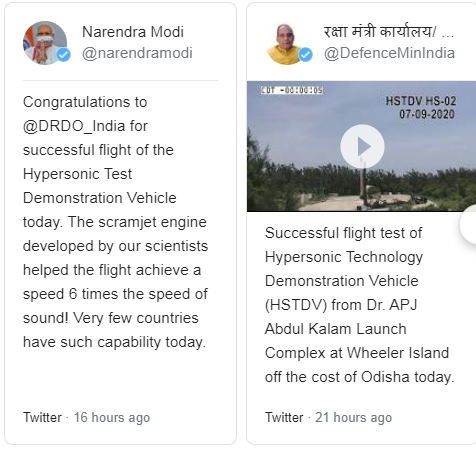 Subsonic cruise missile travels at a speed lesser than that of sound.  At a speed of around 0.8 Mach it travels. American Tomahawk cruise missile is a well-known subsonic missile. Other examples are Harpoon of USA, Nirbhay of India, and Exocet of France.

HSTDV is developed by Defence Research and Development Organisation (DRDO) and is based on hypersonic propulsion technologies. It will help India to develop futuristic space assets like long-range missile systems and aerial platforms.

Asteroids and their impact on Earth: All you need to know

How was the Hypersonic cruise vehicle successfully launched?

The hypersonic cruise vehicle was launched by using a proven solid rocket motor, which took it to an altitude of 30 kilometres. Here, at hypersonic Mach number, the aerodynamic heat shields were separated. Then, the cruise vehicle separated from the launch vehicle and the air intake opened as planned.

The hypersonic combustion sustained and after sustaining, the cruise vehicle continued on its desired flight path at a velocity of six times the speed of sound which is nearly 02 km/second for more than 20 seconds.

The critical events including fuel injection and auto ignition of scramjet demonstrated technological maturity. It is said that the scramjet engine performed in a textbook manner.

How was it monitored?

With the help of multiple tracking radars, electro-optical systems, and Telemetry Stations, the parameters of launch and cruise vehicle including the scramjet engine were monitored.

Also to monitor the performance during the cruise phase of hypersonic vehicle, a Ship was also deployed in the Bay of Bengal. All the performance parameters have indicated a resounding success of the mission.

What is the Scramjet Engine?

It is said that it is an improvement over the ramjet technology. It operates efficiently at hypersonic speeds and allows supersonic combustion. Let us tell you that Hypersonic missiles travel at speeds in excess of Mach 5. At high dynamic pressure and at very high temperature, the scramjet engine worked.

Details about the Project

In developing a new class of ultra-modern weapons, India took the first step. The weapon can travel six times faster than the speed of sound (Mach 6) and penetrate any missile defence. DRDO carried out a successful flight test of the hypersonic technology demonstrator vehicle (HSTDV) for the first time from a launch facility off the Odisha coast. We can say that Mach 6 translates into a speed of around 7,408 kmph.

Challenges for Hypersonic flights are as follows:

- The successfully testing of the flight proved about various critical technologies like aerodynamic configuration for hypersonic maneuvers, use of scramjet propulsions for ignition, and separation mechanism that too at speeds in excess of Mach 6.

In the early 2010s, the DRDO started the development of the engine. In fact, the Indian Space Research Organisation (ISRO) has also worked on the development of technology and has successfully tested a system in 2016. In June 2019, DRDO itself has also conducted a test of this system.

DRDO Special project consisted of contributions from its multiple facilities including the Armament and Combat Engineering Cluster which is headquartered at Pune. According to a DRDO scientist "At the hypersonic speeds, the system has to handle temperatures to the range of 2500 degrees celsius as well as the air speed, and thus the development of the material is one of the main challenges.” For this project, DRDO has used several technologies that are already available with it.

Why is this test important for India?

In a series of tweets, DRDO said "In a historic mission today, India successfully flight-tested Hypersonic Technology Demonstrator Vehicle, a giant leap in indigenous defence technologies and a significant milestone towards a Sashakt Bharat and Atmanirbhar Bharat. DRDO with this mission has demonstrated capabilities for highly complex technology that will serve as the building block for NextGen Hypersonic vehicles in partnership with industry.”

The country enters into the hypersonic regime paving way for advanced hypersonic Vehicles with this successful demonstration.

As discussed above the HSTDV is an unmanned scramjet demonstration aircraft for hypersonic speed flight. This means that it has a speed greater than five times the speed of sound (Mach 5).

Also, the HSTDV is a dual-use technology that will have multiple civilian applications like the launch of small satellites at a low cost. Already, HSTDV will be used as a vehicle for hypersonic and long-range cruise missiles. Therefore, the test-firing of HSTDV is important for India. Now, India joins the US, Russia, China hypersonic Missile club.

Two large Asteroids made a close approach to Earth: All you need to know about Asteroids 2011 ES4 and 2020 QG5

How many types of Cruise Missiles are there?