What is IMEI Number and how does it work? 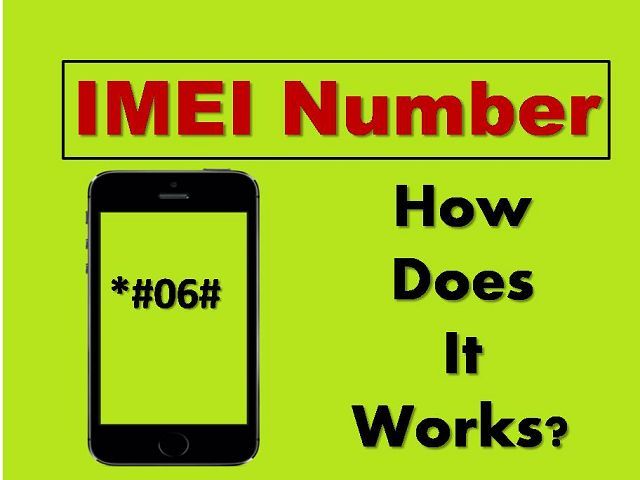 What is an IMEI number?

These numbers are also available in GSM, CDMA and IDEN and some satellite phones. This number is made of 15 digits (sometimes 16 and 17 digits) which shows the mobile phone device number, its place of origin and the serial number of mobile (device).

According to an estimate about 25 million people in India are using mobile phones without the IMEI number. Since 30 November 2009 night, Government of India banned the mobile device without IMEI number or having fake IMEI number. How Postal Index Number or PIN Codes are generated in India?

What is the function of IMEI number?
The IMEI number of any phone indicates the phone's current location. Through IMEI number, it can be ascertained that where is an individual standing? If a person's phone is lost or stolen, then that phone's location can also be traced through the phone's IMEI number. If someone does not know the IMEI number of his mobile phone then he has to dial * # 06 # from his phone to know the same.

What are the benefits of the IMEI number?

1. The most important advantage of the IMEI number is that it helps in catching the criminals.

2. If someone has lost his mobile phone or stolen by someone then IMEI number can be useful to trace the location of the phone/thief.

How does IMEI number helps in catching the thieves?

Police traces the mobile phone’s location by knowing the network used by the SIM card of the theft/lost mobile.  Police immediately informs the nearby police station to catch a particular vehicle or individual using the IMEI number of the mobile phone. (See the picture below to understand properly) How IMEI number is made

The IMEI (15 decimal digits: 14 digits plus a check digit) or IMEISV (16 digits) includes information on the origin, model, and serial number of the device. The structure of the IMEI/SV is specified in 3GPP TS 23.003. The model and origin comprise the initial 8-digit portion of the IMEI/SV, known as the Type Allocation Code (TAC). The remainder of the IMEI is manufacturer-defined, with a Luhn check digit at the end. For the IMEI format prior to 2003, the GSMA guideline was to have this Check Digit always transmitted to the network as zero. This guideline seems to have disappeared for the format valid from 2003 and onwards.

The last number of the IMEI is a check digit calculated using the Luhn algorithm, as defined in the IMEI Allocation and Approval Guidelines.

The check digit is validated in three steps:

Conversely, one can calculate the IMEI by choosing the check digit that would give a sum divisible by 10.

Let’s understand that what would be placed at the point of question mark?

What is the IMEI number of different countries? So from this above information it becomes clear that the IMEI number of any mobile holds very crucial information about the mobile phone and its manufacturer which plays a very important role in curbing the crime.