What is Operation Vanilla?

Have you heard about 'Operation Vanilla'? How is it related to the Indian Navy? Let us find out! 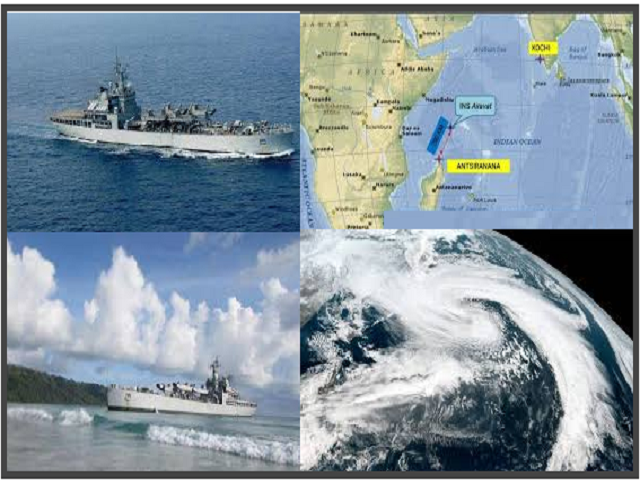 Operation Vanilla is launched by the Indian Navy on 28 January to help cyclone-hit Madagascar.

Let us tell you that the INS Airavat is a large amphibious ship that was on a mission-based deployment near Seychelles. Basically to provide assistance the large ship is diverted.

According to the Indian Navy "INS Airavat, which was mission deployed has been diverted for the same".

What happened in Madagascar?

A cyclone hit at Madagascar and due to it, there has been heavy flooding and landslips since last week which results in loss of lives and displacement of a number of people. Do you know that according to reports more than 92,000 people have been affected? In fact on Twitter, the President of Madagascar has requested an international mobilisation. That is why INS Airavat has been immediately diverted en-route to Seychelles to Madagascar for rendering assistance. It is expected to reach Madagascar by 30 January.

Indian Navy Day: Why is it celebrated on 4 December?

How ship will help the people of Madagascar?

According to official sources, the ship is carrying five pallets each of the victualing, clothing and naval stores along with three pallets of medicines. The ship will be able to provide help including clothing, emergency food, temporary shelters, medical assistance, carry out transportation and evacuation of personnel using four large and two medium-sized boats, diving, and communication assistance.

Note: The assistance of India to Madagascar is in consonance with the Indian Navy's Foreign Cooperation initiatives in line with the Prime Minister's vision of 'Security and Growth for all in the Region (SAGAR)'.

Let us tell you that President Ram Nath Kovind in March 2018 became the first Indian President to visit Madagascar island. During his visit, India and Madagascar signed a defence cooperation agreement. Of inter-governmental organisation Indian Ocean Rim Association (IORA), Madagascar is a member. According to the sources, there are about 15,000 persons of India origin in Madagascar, including approximately 2500 Indian passport holders.

In the Indian Ocean Region, the Indian Navy has been the first responder for Humanitarian and Disaster Relief (HADR).

It is the third Shardul-class amphibious warfare vessel of the Indian Navy. It was built by Garden Reach Shipbuilders and Engineers in Kolkata at Yard. She had completed basin trials in May and began its sea trials in July 2008. On 19 May 2009, she was commissioned at the Eastern Naval Command in Visakhapatnam by the Chief of Naval Staff, Admiral Suresh Mehta. The meaning of Airavat in Hindi is the mount of god Indra, the elephant Airavata, as mentioned in the Rigveda.

- It has smoke curtains to hinder the spreading of smoke and toxic gases in case of fire.

- If fully loaded, she can operate independently at high seas for up to 45 days.

Therefore, we understood that 'Operation Vanilla' has been launched by the Indian Navy on 28 January to help the people of Madagascar Island from the natural disaster.

Why is Army Day celebrated in India?