What is Special Category Status to states and its benefits?

Special category status is given to those states which fulfils some criteria like; hilly and difficult terrain, strategic location along international borders, low per capita income, low population density or the presence of sizeable tribal population, economic and infrastructural backwardness and non-viable nature of State finances.

India is the “union of the states”. Currently India has 29 states and 7 Union Territories. All these states and Union Territories get share in the taxes of central government at the interval of the 5 years on the basis of recommendations of the Finance Commission, set up by the President of India.

Apart from the recommendations of the Finance Commission, the central government is entitled to give more financial assistance to any state under the article 275 of the Indian constitution.

What is Special Category Status?

In the year 1969, the fifth Finance Commission (Chairman Mahavir Tyagi) had given status of Special Category States to three states (Jammu & Kashmir, Assam and Nagaland) on the basis of Gadgil Formula.The reason for giving special status to these three states was the social, economic and geographical backwardness.

Criteria to give status of Special Category States;

1. The state which is facing the problem of resources crunch

Benefits for the Special Category States:

2. Centre bears 90% of the state expenditure (given as grant) on all centrally-sponsored schemes and external aid while rest 10% is given as loan to state at zero percent rate of interest. While general category states get 70% fund as loan and 30% in the form of grant.

3. A huge 30% amount of planned expenditure of the central budget goes to ‘Special Category’ States.

5. Special Category States get preferential treatment in getting central fund which attracts the development projects in the states.

6. Special Category States have the facility that if they have unspent money in a financial year; it does not lapse and gets carry forward for the next financial year.

Additional fund received from the central government encourages the state government to start more welfare oriented schemes for the holistic development of the state.
Currently 11 states have Special Category Status? 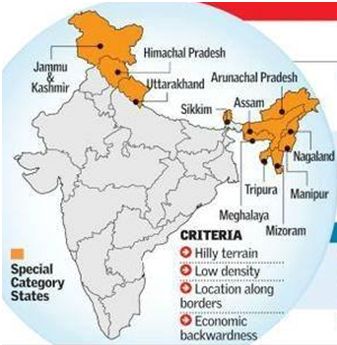 Currently following 5 states are agitating to get the status of special states.

Why other states are not getting Special Category Status?

Finance Minister Arun Jaitley said that the recommendations of the 14th Finance Commission (Chairman Y.V. Reddy) have been submitted and accepted by the central government. Therefore, it is not possible to do changes in the recommendations. That is the reason that the status of special states can't be given to any new state.

It is expected that after reading the article, you must have understood that what is the criterion to give the status of special state and what facilities are provided to these special states?

What is the State wise Renewable Energy Potential in India?