What is the difference between DNA and RNA

DNA is a deoxyribonucleic acid and is a hereditary material whereas RNA is ribonucleic acid present in all living cells. Both DNA and RNA is important, if either one of these polymers fails or disappear then life would cease to exist. Without these elements protein will not be able to generate which is important for life to exist and to produce energy. 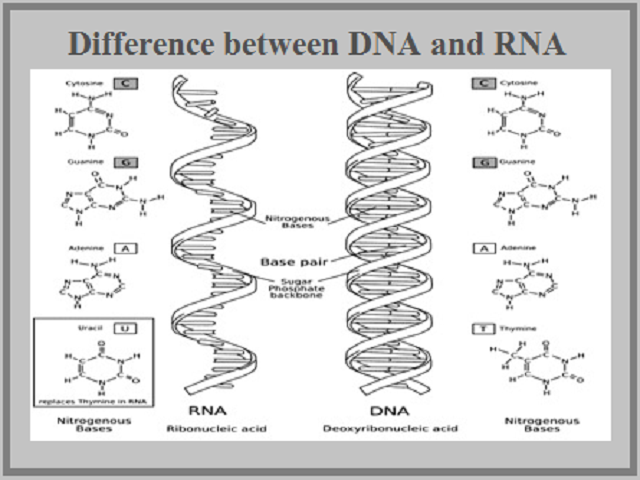 Difference between DNA and RNA

DNA is a deoxyribonucleic acid and is a hereditary material in all living organism. It is located in the nucleus of cell which is known as nuclear DNA. But small amount of DNA is also found in the mitochondria known as mtDNA or mitochondrial DNA whereas RNA is ribonucleic acid present in all living cells. It carries instructions from DNA which controls the synthesis of proteins but in some viruses RNA, instead of DNA carries the genetic information. Do you know who had reported first time nucleic acids in 1871 - Friedrich Miescher from nuclei of pus cells.

The main difference of DNA and RNA are as follows:

While seeing the difference between DNA and RNA we will come to know about the structure, function, stability, nitrogenous base, their unique traits etc.