What is the Siachen Glacier Dispute?

About the Siachen controversy:

The average elevation of Siachen Glacier from sea level is approximately 17770 feet. Most of the Siachen Glacier as is the LoC, a disputed territory between India and Pakistan. The area of "Aksai Chin" is also located in this area.

It is very important for India to deploy its troops in this area to monitor the activities of the Pakistan and China in this area. Prior to 1984 neither India nor Pakistan had any permanent presence in the area.
The reason for the dispute:

In the Shimla Agreement of 1972, the Siachen area was termed as barren and useless. But this agreement did not determine the boundary between India and Pakistan. India got intelligence in 1984 that Pakistan has ordered to prepare some “hot suit” to a European company to capture the area of Siachen Glacier. But before the consignment of Pakistan suit taken place; India got ready these “hot suits” and deployed its troops on “Bilafond La Pass”.

India launched Operation Meghdoot (named after the divine cloud messenger in a Sanskrit play of Kalidasa) on 13 April 1984 when the “Kumaon Regiment” of the Indian Army and the “Indian Air Force” went into the Glacier.

Who is more powerful in the defense sector between India and China: A comparative study?

The Pakistan army also tried to climb this place on April 25, 1984 but had to return due to poor weather conditions and inadequate preparations. Finally, on June 25, 1987, Pakistan achieved success in creating a post called “Quaid Post” at an altitude of 21 thousand feet, because the Indian army had finished all its ammunition.

In 2003, there was an armistice treaty signed between India and Pakistan. Since then firing and bombardment has ceased in this area but the army of both nations is stationed here. India has deployed around 10000 soldiers in the Siachen Glacier whose total cost is around Rs. 5 crore per day.

Interesting Facts about cold in the Siachen Glacier;

The soldiers in Siachen region are appointed at around 18,000 to 23,000 feet above the sea level. The temperature falls below up to minus 55 degrees celsius because there are approximately 22 Glaciers in this area. 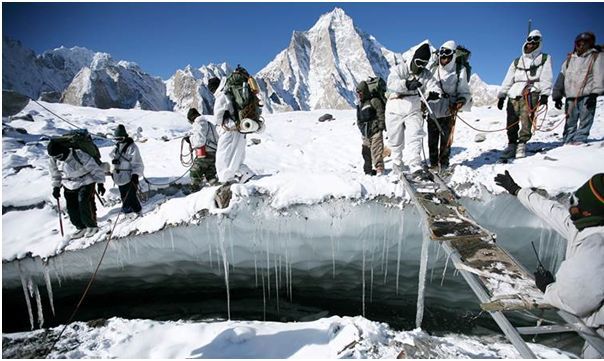 The situation in Siachen Glacier is so severe that soldiers don’t get sufficient oxygen essential for their survival.  Here the soldiers have to walk in the snow till the knees. A healthy soldier can also walks a few steps only due to extreme weather conditions.

In Siachen Glacier; rifles are thawed frozen and machine guns primed with boiling water. Soldiers are bound to suffer from hypothermia, frostbite and chilblains. The soldier's own sweat can become his enemy as it converts into ice in his gloves and shoes and frostbite increases the severity of the soldiers.

In the Siachen Glacier; the soldiers need to have food of more than 4000-5000 calories per day but they don’t get it. Inadequate food availability reduces the weight of the soldiers between 5 to 10 kg in 3 to 4 months. The special food of these soldiers is prepared by the scientists of the Defense Research and Development Organization (DRDO).

To get the drinking water the soldiers need to melt the ice on the stove but in the absence of adequate fuel the availability of the safe drinking water is also a challenge for them.

One surprising fact is that the main reason behind the death of the soldiers is not the fight between the India and Pakistan but it is extreme weather conditions. According to an estimate, so far 2500 soldiers of both countries have lost their lives here without any gun battle.

So from the above article you must get the idea that what is the main reason behind the conflict between India and Pakistan and why Siachen Glacier is crucial for these two countries. This article also explained that in what kind of extreme conditions the soldiers of our country are protecting the borders of the country. We all should be thankful to all soldiers of our country.