COVID-19: What is Vaccine and how it works?

As we know that several clinical trials are going on to fight against COVID-19. Scientists and researchers are trying to develop a vaccine across the world for the novel coronavirus. But do you know what is a vaccine and how it works? Let us have a look! 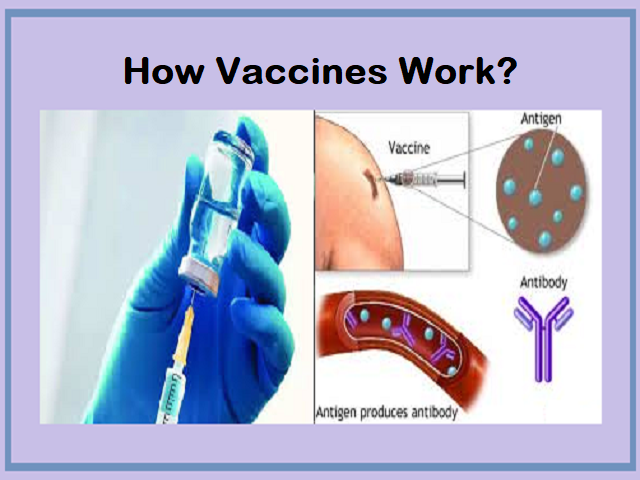 What is Vaccine and how it works?

Vaccines work with the natural defenses of the body, reduce the risk of infection and develop immunity to disease.

Vaccine is a type of medicine that helps body immune system so that it can fight against the disease. It prevents disease, rather than treat disease once you have caught it.

Or we can say that vaccination is one of the most effective ways to prevent diseases. It helps the immune system of the body to recognise and fight pathogens including bacteria or virus and keeps us safe from the disease that they can cause. Let us tell you that the vaccine protects against more than 25 life-threatening diseases like measles, polio, tetanus, diphtheria, meningitis, influenza, typhoid, etc.

Vaccine - It stimulates the immune system to produce antibodies to a pathogen or foreign substance. Most of the vaccines are given through injection but some via orally or nasally.

Vaccination: It is the act of introducing a vaccine into the body to enhance immunity to a specific disease.

Immunisation: It is a process due to which a person or an animal becomes protected against a disease. This term is also used interchangeably with vaccination.

Before going into detail about how vaccines work, first, let us understand about immunity.

In simple terms, we can say that it is a protection from disease. It is said that if immunity is strong then easily we can fight with seasonal diseases. And if you are immune to a disease then you can be exposed to it without even becoming sick.

What is the Immune system?

It is the body's defence against infection. As studied above vaccines prevent us from diseases and reduce the risk of infection by working body's natural defenses to safely develop immunity to disease.

But the question arises how the body fights illness?

When germs like bacteria come into the body, they attack and multiply. This invasion of bacteria or virus is known as an infection that causes illness in the body. The immune system of our body uses various tools to fight against infection. As we know that blood have red blood cells that carry oxygen to several parts of the body, tissues and organs, and white or immune cells help in fighting with infection.

What is 'Herd Immunity'?

Macrophages: These are white blood cells that swallow up and digest germs, dead and dying cells. They leave behind the parts of invading germs known as antigens. As a result, the body identifies antigens as dangerous and stimulates antibodies to fight with them.

B-lymphocytes: They are known as defensive white blood cells. Basically they produce antibodies to attack the antigens left behind by the macrophages.

T-lymphocytes: They are another type of defensive white blood cell. Their work is to attack cells that are already infected in the body.

First-time when body encounters a germ, it takes several days to make and use germ-fighting tools against the infection. After the infection, it starts the methods to protect the body against that disease.

If the body encounters the same germ again, the body T-lymphocytes, called memory cells come into action quickly. When familiar antigens are detected then B-lymphocytes produce antibodies to attack them.

Vaccines in the body help to develop immunity that fights against infection. This type of infection almost never causes illness again, but it causes the immune system to produce T-lymphocytes and antibodies. It is also seen that sometimes, after getting vaccine minor symptoms may occur like a fever. Such type of minor symptoms is normal and should be expected as the body builds immunity.

Once the infection goes away, the body "memory" remembers the supply and as a result T-lymphocytes and B-lymphocytes will remember how to fight the disease in the future. It is to be noted here that, the body takes a few weeks to produce T-lymphocytes and B-lymphocytes after vaccination. So, it is possible that if a person is infected with a disease just before or just after the vaccination then he or she could develop symptoms and gets a disease because the vaccine would not get enough time to provide protection.

Let us tell you that vaccines are made from the same germs or parts of them that cause disease for example polio vaccine is made up from poliovirus. In the vaccine, the germs are either killed or weakened so they won't make a person sick.

Now the vaccine that contains these weakened germs is introduced into the body, mainly by injection. Then the immune system reacts in the same way that it would be invaded by the disease by generating antibodies. Now, the antibodies destroy the germs of the vaccine as they do with the disease germs just like a training exercise. Then, they stay in the body and provide immunity. If a person anytime exposed to the real disease, then antibodies are there to protect him.

Some facts to remember

- Antigens are the foreign substance which induces an immune response in the body mainly the production of antibodies.

- Antibody is a protective protein that is produced by the immune system of the body in response to the presence of a foreign substance called an antigen.

- Antibodies help to destroy the germs that make sick. They eliminate the attacking germs and help to get well.

- Antibodies also protect from future infections. They remain in the bloodstream and in future if the same germs infect again then it will come to defense and protect it.

So now you may have understood about the vaccine and how it works.

What is Plasma Therapy and how it works?