In CBSE Class 10 Term 2 Exam 2022, the English question paper will have a question based on a factual passage (unseen passage) of 5 marks. Students can easily score full marks in this question with a little practice and understanding of the question. To help students get the required dose of practice, we have provided below the ‘Case Based Factual Passages’ for the term 2 exam. These passages have been suggested by experienced teachers. These passages are provided with answers. You can download all the factual passages with answers in PDF from the link provided below in the article.

1. India is home to an estimated 10% of the global Snow Leopard population spread across five Himalayan states of Jammu and Kashmir, Himachal Pradesh, Uttarakhand, Sikkim and Arunachal Pradesh which is only 5% of the available global habitat for the animal.

2. Project Snow Leopard was introduced in India by the Project Snow Leopard Committee instituted by the Ministry of Environment and Forests, Government of India, in the year 2009 to safeguard and conserve India‘s unique natural heritage of high-altitude wildlife populations and their habitats by promoting conservation through participatory policies and actions.

3. Project Tiger and Project Elephant are prevalent in India with the former introduced in 1973 garnering worldwide attention.

4. The Snow Leopard usually occurs at an altitude of >2700m above sea level and is the apex predator in the Himalayan Region along with the Tibetan Wolf. The project is not only to protect the Snow Leopard, but as with Project Tiger, it is considered an umbrella species and with its protection, comes the protection of other species and the habitat which they are all a part of. 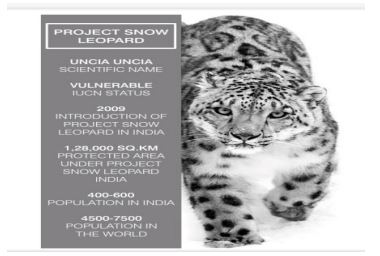 The reasons for introduction of Project Snow Leopard are as follows

i) High altitudes of India > 3000m including the Himalayan & Trans-Himalayan biogeographic zones support a unique wildlife assemblage of global conservation.

ii) There has been relatively less attention on the region from the viewpoint of wildlife conservation.

v) India has ratified international agreements promoting the conservation of high-altitude wildlife species such as the snow leopard.

vi) The region is important for the country‘s national security as well as international relations.

vii) The high-altitude wildlife in India today faces a variety of threats.

ix) Wildlife Management in the region needs to be made participatory.

Based on your understanding of the passage, answer ANY FIVE questions from the six given below.

1.What is the purpose of the above passage/study?

2.What do you mean by the phrase- "snow leopard is considered an umbrella species?"

3.According to the above passage why high-altitude regions should be protected?

4.According to the above passage what is integral to the nation‘s food security?

5.Which Indian states come under the Himalayan region?

6.List out two important factors why the high-altitude region is important.

1.The purpose of the passage is to show that snow leopards are vulnerable species and must be protected.

2.'Umbrella' species refers to such species whose protection will ensure the protection of other species. Hence, option (a).

3.High altitude regions should be protected as they support unique wildlife of global significance.

4.River systems are integral to the nation‘s food security.

6.Important for the country‘s national security as well as international relations and the high-altitude wildlife in India today faces a variety of threats.

Get more passages for practice by clicking on the following link: