Chapter notes for CBSE Class 9 Science chapter 9, Force and Laws of Motion, are available here. These notes cover Newton’s laws of motion and their applications in daily life. You will also learn a brief explanation of the law of conservation of momentum and its applications.

In this article, you will get the CBSE Class 9 Science notes on chapter 9 ‘Force and Laws of Motion’ (Part-II). This part is a continuation of the Chapter notes Part-I of the same chapter. In the previous part, you learned about force, effects of force, types of force and Newton’s first law of motion. Here, you will get a brief explanation of the remaining topics.

These chapter notes are prepared by the subject experts and cover every important topic from the chapter. At the end of the notes, you can try the questions asked from the discussed set of topics. These questions will help you to track your preparation level and get a hold on the subject.

Main topics covered in this part of CBSE Class 9 Science, Force and Laws of Motion: Chapter notes, are:

Key notes for Chapter - Force and Laws of Motion, are:

It states that the rate of change of momentum of a body is directly proportional to the applied force and takes place in the direction in which the force acts.
Mathematical formulation of Newton’s Second Law of Motion:
Let mass of an moving object be m.
Let is initial velocity be u and final velocity be v.
We know that momentum (p) = Mass × velocity
Therefore,
Initial momentum of object = mu
And Final momentum of the object = mv
Therefore, change in momentum = mv – mu 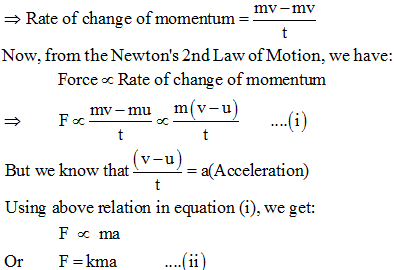 Where k is the proportionality constant
Now, 1 unit force is defined as the force applied on an object of mass 1kg to produce the acceleration of 1m/s2.
Thus, 1 unit of force = k ×1kg ×1m/s2

The SI unit of Force

If force, mass and acceleration is taken as 1 unit.

Thus, one unit of force is defined as the amount that produces an acceleration of 1 m/s2 in an object of mass 1 kg.

Conservation of Momentum
If t or more objects apply force on each other with no extemnal force, their final momentum remains same as initial momentum.
Total momentum before collision = Total momentum after collision

Mathematical Formulation of Conservation of Momentum:

Suppose, two objects A and B each of mass m1 and mass m2 are moving initially with velocities u1 and u2, strike each other after time t and start moving with velocities v1 and v2 respectively.

Initial momentum of object A = m1u1

Initial momentum of object B = m2u2

Final momentum of object A = m1v1

Final momentum of object B = m2v2 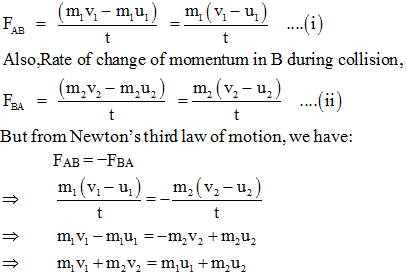 Applications of Conservation of Momentum:

Q1. If action is always equal to the reaction, then how a horse is able to pull a cart.

Q2. Explain, why is it difficult for a fireman to hold a hose, which ejects large amounts of water at a high velocity.

Q3. If the mass of a moving object is 50 kg, what force will be required to speed up the object at a rate of 2ms–2?

Q4. An object of 50 kg gets the speed of 10m/s in 5 second from zero velocity. Calculate the required force applied by engine of the car.