CBSE MCQs on Class 9 Science Chapter 9: Force and Laws of Motion are prepared by subject experts to help students know the important topics and fundamental concepts from the chapter which can be tested in the exam in form of objective type questions. Students should practice all these questions to score good marks in the exam. All the questions are provided with correct answers.

1. A goalkeeper in a game of football pulls his hands backwards after holding the ball shot at the goal. This enables the goalkeeper to:

(a) Exert large force on the ball

(b) Increases the force exerted by the ball on hands

(c) Increase the rate of change of momentum

(d) Decrease the rate of change of momentum

Answer:(d) Decrease the rate of change of momentum

2. An object of mass 2 kg is sliding with a constant velocity of 4 m/s on a friction less horizontal table. The force required to keep the object moving with the same velocity is:

3. Newton’s third law of motion explains the two forces namely ‘action’ and ‘reaction’ coming into action when the two bodies are in contact with each other. These two forces:

(a) Always act on the same body

(b) Always act on the different bodies in opposite directions

(c) Have same magnitude and direction

(d) Acts on either body at normal to each other

Answer:(b) Always act on the different bodies in opposite directions

4. In a rocket, a large volume of gases produced by the combustion of fuel is allowed to escape through its tail nozzle in the downward direction with the tremendous speed and makes the rocket to move upward. 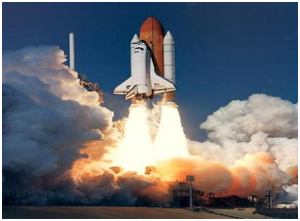 Which principle is followed in this take off of the rocket?

(a) Moment of inertia

(b) Conservation of momentum

5. A water tank filled upto 2/3 of its height is moving with a uniform speed. On sudden application of the brake, the water in the tank would

(c) Come to the rest

6. Velocity versus time graph of a ball of mass 50 g rolling on a concrete floor is shown in the figure below. What will be the frictional force of the floor on the ball? 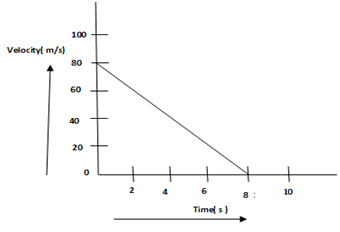 7. The seat belts are provided in the cars so that if the car stops suddenly due to an emergency braking, the persons sitting on the front seats are not thrown forward violently and saved from getting injured. Can you guess the law due to which a person falls in forward direction on the sudden stopping of the car?

(a) Newton’s first law of motion

(b) Newton’s second law of motion

8. When a balloon held between the hands is pressed, its shape changes. This happens because:

(a) Balanced forces act on the balloon

(b) Unbalanced forces act on the balloon

9. Which of the following situations involves the Newton’s second law of motion?

Answer:(c) A force can accelerate a lighter vehicle more easily than a heavier vehicle which are moving

11. A passenger in a moving train tosses a coin which falls behind him. Observing this statement what can you say about the motion of the train?

12. Newton’s first law of motion says that a moving body should continue to move forever , unless some external forces act on it. But a moving cycle comes to rest after some time if we stop pedaling it. Can you choose the correct reason for the stoppage of cycle?

ii. Gravitational pull of the earth

iii. Friction of the road

iii. Heat of the environment

13. A man wearing a bullet-proof vest stands on roller skates. The total mass is 80 kg. A bullet of mass 20 g is fired at 400 m/s. It is stopped by the vest and falls to the ground. What is then the velocity of the man?

14. The unit of measuring the momentum of a moving body is:

15. The inertia of a moving object depends on:

i. Mass of the object

ii. Momentum of the object

iii. Speed of the object

iv. Shape of the object

All above questions can also be downloaded from the following link. Students can save these questions in pdf and revise as per their convenience.