In this article you will get CBSE Class 9 Science chapter, Motion: Important Questions & Preparation Tips for Semester Assessments - I 2017. All the questions have been prepared to cover most of the important topics included in chapter- Motion. Moreover the preparation tips mentioned in this article will make your preparation for exams easy and organised. 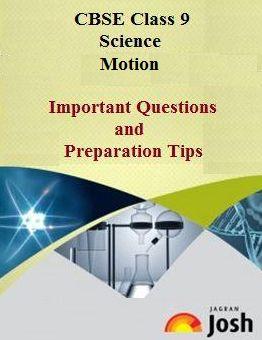 Get the CBSE Class 9th Science chapter, Motion: Important Questions & Preparation Tips 2015. This will provide you with a very clear idea about what type of questions are being framed for the exam and from which topics. The pattern in which the Question Paper is set is quite different from the style in which the course structure is actually defined. Consider the below mentioned terms/questions at the time of preparation.

Try to get clear-cut difference between rest and motion

• Study the difference between distance and displacement (Very important)

• Which of the following is true for displacement?

(b) Its magnitude is greater than the distance travelled by the object.

• Practice the numerical on distance-time concept

• Calculation of average speed and average velocity. Difference between both velocities

• Units of speed and velocity

• What is the speed of sound in air?

• Concept of acceleration with examples

• A train starting from a railway station and moving with uniform acceleration attains a speed 40 km hñ1 in 10 minutes. Find its acceleration.

• Shapes of graphs for uniform and non-uniform speed and velocity

• How you can determine the distance moved by a car from its velocity-time graph.

• When an object moves along a straight line with uniform acceleration then how many equations are being used to relate its velocity, acceleration during motion and the distance covered by it in a certain time interval.

• Have a good command over example problems

• What is the quantity which is measured by the area occupied below the velocity-time graph?

• Practice the Velocity-time graph to obtain the equations of motion

• A stone is thrown in a vertically upward direction with a velocity of 5 m s-1. If the acceleration of the stone during its motion is 10 m sñ2 in the downward direction, what will be the height attained by the stone and how much time will it take to reach there?

• Formula of velocity of an object running on a circular path and either this motion is accelerated or non-accelerated.

• An artificial satellite is moving in a circular orbit of radius 42250 km. Calculate its speed if it takes 24 hours to revolve around the earth.

Q. The SI unit of retardation is:

Q. What information you get from the equation given below:

Q. Study the above equations for free fall motion

Q. A car accelerates at 1.5 m/s2 on a straight road. How much is the increase in velocity in the next 6 seconds?

Q. Pick the correct statement for a scalar quantity:

3. Both magnitude and direction

Q. Give two examples of uniform and non-uniform motion