Former students of VIT come together for interaction

Former students of VIT, Vellore, met at their alma mater on Saturday and had an interaction in which several issues were discussed in length. One of the highlights was the participation of Mr. T.T. Srinivasa Raghavan, Managing Director, Sundaram Finance, who also handed over awards to the best functioning chapters of VIT Alumni Association, both within India and abroad. 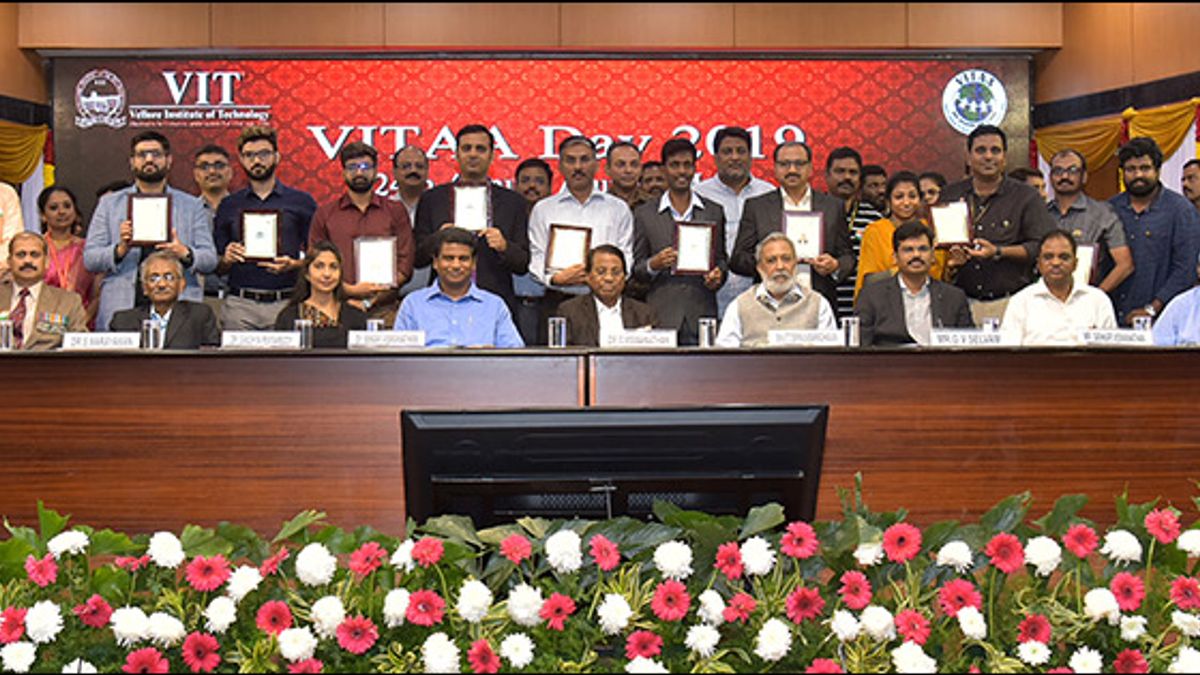 VELLORE: Former students of VIT, Vellore, met at their alma mater on Saturday and had an interaction in which several issues were discussed in length. One of the highlights was the participation of Mr. T.T. Srinivasa Raghavan, Managing Director, Sundaram Finance, who also handed over awards to the best functioning chapters of VIT Alumni Association, both within India and abroad.

Every year, several former students, working in different companies and places all over the world and also those who are entrepreneurs, meet on Republic Day at the Vellore Campus of VIT, one of India’s premier private universities, offering the best and world education to young women and men from all over India and also several countries around the world.

On Saturday, over 6,000 people including former students and their families met at VIT at the event, organised by the VIT Alumni Association. Captain S.M.Kannan, welcomed the gathering at the inaugural function of the event held at Anna Auditorium.

Vice Presidents Sankar Viswanathan, Dr. Sekar Viswanathan and G.V.Selvam were among those who took part on the occasion. On behalf of the VIT Alumni Association, a financial assistance of Rs. 2 lakh was extended to 20 students belonging to poor families.

Dr. G. Viswanathan, Founder and Chancellor of VIT, Presided over the function and dedicated the newly designed website of VIT Alumni Association. In his address, Dr. Viswanathan said that he was immensely pleased to note that over 6,000 former students and their families had gathered on Saturday. He said that through one form or another, former students of VIT were extending their contribution to the well being of the society all over the world. He recalled that when VIT was functioning earlier as Vellore Engineering College, the TVS Group had extended a financial assistance of Rs. 3 lakh. He said that 34 years back, a sum of Rs. 3 lakh was a very huge amount. He said that employees of TVS Group were highly committed and similarly, students of VIT too were very committed.

Former students of VIT were excelling in various walks of life. Noting that Maheswari, I.P.S. who had recently received the President’s Medal for meritorious service was a former student of VIT, Dr. Viswanathan said that he was very happy with this honour. He said everyone had to pledge their commitment towards the welfare and upliftment of India. He said that if quality higher education was imparted to all young women and men, India would achieve the developed nation status rapidly. He said that the electoral system of democracy was against the interests of India. He said that the outcome of elections was decided by the money factor and this had to change and stressed on the need for an honest and a clean system of voting during the elections. He said that all attempts should be made to prevent distribution of money during elections. By staying away from receiving money, the educated youth of the country should prove to be ideal citizen and should pave the way for bringing about a change in the system in India, Dr. Viswanathan said.

Mr. Sreenivasa Raghavan, who was the Special Guest on the occasion, handed over the prizes for the best alumni chapters within India and abroad. In his address, he said that VIT had witnessed immense growth in the past 35 years. When it was established as Vellore Engineering College in 1984, the present Chancellor Dr. Viswanathan had submitted an appeal to the TVS Group for establishing a computer science laboratory. Since TVS Group was engaged in the heavy vehicles business and manufacture of spare parts for the same, the company handed over a financial assistance of Rs. 3 lakh to VIT. Using that amount, VIT established a computer science lab in the memory of T.S.Santhanam of TVS Group.

An educational institution should be a place where quality and skillful education is imparted through time tested and esteemed teaching methods. Not only in terms of numbers, VIT was also churning out fine individuals and this had to be appreciated, Mr. Sreenivasa Raghavan said.

Further, former students of Chennai and Vellore campuses of VIT contributed Rs. 1.6 lakh to Universal Higher Education Trust and this was received by Dr. Viswanathan, who is also president of the Trust. The Trust provides financial assistance to several women and men to help them pursue college education. Among others who were present on the occasion included Executive Director Dr. Sandhya Pentareddy, Vice Chancellor Dr. Anand A.Samuel and Pro Vice Chancellor Dr. S. Narayanan.

Disclaimer: The information provided in this Notification is solely by VIT, Vellore, Jagranjosh.com bears no representations or warranties of any kind, express or implied, about the completeness, accuracy, reliability, suitability or availability with respect to the information. Individuals are therefore suggested to check the authenticity of the information.