The IAS Main 2013 was a surprise package this time due to its New Syllabus and Pattern. The IAS Main 2013 started on 2 December 2013 with Essay Paper according to the Scheme of Examination given by the Union Public Service Commission. After a gap of one day for the Subject Papers, all the subject papers were conducted on 7 December 2013.

History is one of the most favourite subjects among all because the Uttar Pradesh, Bihar, Madhya Pradesh and the Hindi speaking state’s student opt for History as their first choice. History is dynamic as well as static in its Orientation. Maintaining the trend from the General Studies Paper I, all the papers are expecting more writing speed from the candidates.

This Year there were 8 questions from which 5 were to be attempted. Question no. 1 was related to the Map and was compulsory. But the most interesting and difficult thing was that every question was divided into sub parts. The questions were of 10 marks, 15 marks and 20 marks.
In Q.No (1) 20 locations were asked to be identified on the Map. This question was of 50 marks and each location was of 2.5 marks.

See Below for the IAS Main 2013 History Paper I.

Please read each of the following instructions carefully before attempting questions

There are EIGHT questions divided in Two Sections and printed both in HINDI and in ENGLISH.

Question no. 1 and 5 are compulsory and out of the remaining, THREE are to be attempted choosing at least ONE from each section.

The number of marks carried by a question/part is indicated against it.

Answers must be written in the medium authorized in the Admission certificate which must be stated clearly on the cover of this Question-cum-Answer (QCA) booklet in the space provided. No marks will be given for answers written in medium other than the authorized one.

Any page or portion of the page left blank in the answer book must be clearly struck off. 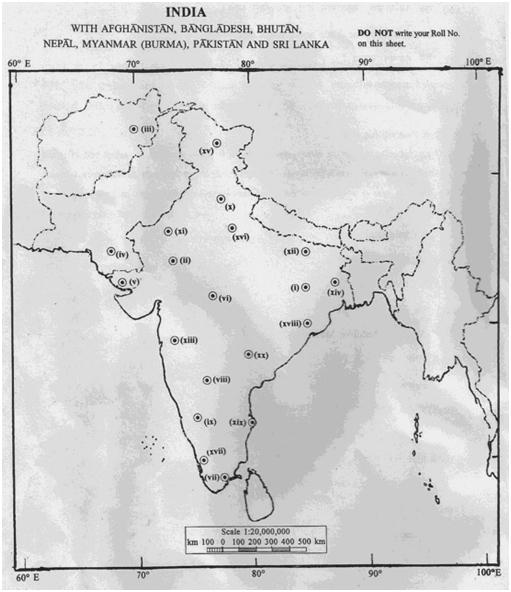 Q.2 (a) Evaluate various views regarding human settlements as gleaned from the Vedic sources. 15

Q.2 (b) Discuss the water management and its conservation planning in the Harappan (Indus-Saraswati) cities. 20

Q.2 (c) In the absence of a written script Chalcolithic pottery gives us a fascinating insight into the culture and life styles of the people of those times. Comment critically. 15

Q.3 (a) On the basis of contemporary sources assess the nature of banking and usuary in ancient India. 15

Q.3 (b) Social norms for women in the Dharmasastra and Arthasastra tradition were framed in accordance with the Varnashrama tradition. Evaluate critically. 20

Q.3 (c) “The varna concept may always have been largely a theoretical model and never an actual description of society." Comment in the context of Ancient India. 15

Q.4 (a) Evaluate the contribution of the Puranas in disseminating secular knowledge among the masses in ancient India. 15

Q.4 (b) Evaluate the ownership of land in ancient India on the basis of literary and epigraphic sources. 15

Q.4 (c) Explain as to how the early Buddhist Stupa art, while using folk motifs and narratives and common cultural symbols, succeeded in transforming these themes for expounding the Buddhist ideals. 20

Q.5 (a) Evaluate the Malfuzat texts sources of medieval history. 10

Q.5 (b) Discuss the state of society and economy of the Bahmani kingdom as gleaned from historical sources. 10

Q.5 (c) Give a sketch of Indian trade with Europe during the Mughal period. 10

Q.5 (d) Analyze the steps taken by Razia Sultan to strengthen her position as an independent ruler despite various obstacles. 10

Q.5 (e) Bhakti and mysticism of Lal Ded emerged as a social force in Kashmir. Comment. 10

Q.6 (b) On the basis of contemporary sources evaluate the system of agriculture and irrigation of the Vijaynagar kingdom. 15

Q.7 (a) On the basis of the accounts of Europeans being out the agrarian crisis of the 17th century CE India. 20

Q.7 (c) Discuss and evaluate critically various trends  in the historiography of bhakti. 15

Q.8 (a) Analyze how the political processes of state formation of Mewar, from 10th-15th century CE was challenged in the 16th century CE by the imperialist policy of Akbar. 15

Q.8 (b) Assess the Lekhapaddhati as an important source for evaluating the society and economy of the thirteenth century CE with special reference to Gujarat. 15

Q.8 (c) Assess the development of Science and Technology in the Mughal period. 20