Kajal is working from last 9 years and she achieved this success with the job of 9 hours a day. She achieved this success in her fifth attempt but this was the first time she had cleared the IAS Prelims Exam. She always wanted to be a doctor since her childhood days but her hard work and destiny has changed the plan.
Her father always motivated her for taking up the services as a career. She started her preparation in 2016. She was motivated after her consecutive failures in the IAS Prelims Exam and she came back with a bang. 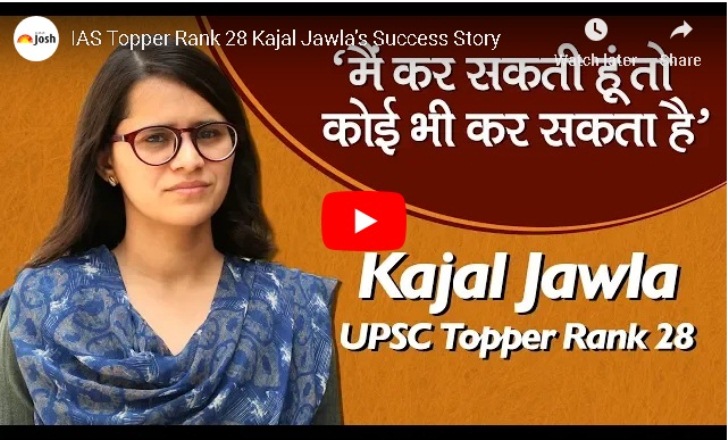 Her father is her role model and outside the family, Dr. A.P.J Abdul Kalam is her role model due to his simplicity.
She says that due to paucity of time, she was unable to pursue her hobbies, but yes, she likes to cook whenever she got time. She has a great interest in the Block Chain technology. She also writes her thoughts in a diary as they came into mind.

She felt that her hard work falls little short in the previous years and her own the responsibility for her failure, but at the same time, she took it as a challenge and overcome all the difficulties. She changed her strategy and cleared the IAS Prelims Exam. She designed her strategy stressing the coverage and revision of the IAS Syllabus.

Her family especially her husband and father supported and motivated her by stating that “keep your focus on the future and do not regret about the past”. They always motivated her by saying that you were always good in your studies and you can do it.

The paucity of time was the biggest challenge for her and she says that she could not complete her targets due to the lack of time.
For a very long time, she had not tasted the success in the IAS Prelims Exam and had no idea that whether her strategy for the IAS Main Exam will actually work or not. She believes that Marriage is not baggage of problems and with her supportive husband she proved it.

For the IAS Preparation, she said that the UPSC Syllabus is like an ocean and the IAS aspirants should know the limits of the IAS Syllabus. The daily newspaper is most important for the IAS Preparation and she suggests to read the newspaper daily and not in an abridged manner. She suggests that the Newspaper is very important for opinion building.

All the stages of the IAS Exam demand different strategy. IAS Prelims demands more and clear information. The candidates should not be confused among the facts, their effects, and concepts. On the other hand, IAS Main Exam required crisp and important knowledge about the topics so that it can be easily reproduced in the IAS Main Exam.

For the personality test or IAS Interview, it is important to have a broader world view and neutral opinion on sensitive issues which can be shaped only by reading the newspaper.
Kajal Jawla suggests that revision is the most important component for the IAS Preparation and because without revision it would be very difficult to reproduce the points in the IAS Main Answers and IAS aspirants will land up in scoring fewer marks in the IAS Main (written) Exam.

For all the static General Studies portion of the GS Syllabus, she studies NCERT books and which helped in clearing the basic concepts. She studied R.S Sharma for History,  Laxmikant for the Indian Polity, Goe Cheng Leong for Geography, Spectrum for the Modern History topics. She studied newspaper in the cab only. She also studied Sociology NCERT so that she can build her opinion on Social Issues for writing the essay in the IAS Exam.

In her daily routine, she studied only three hours in the cab including morning and evening. But on the weekends, she studied for the full days.
She says that the paucity of time proved to be a boon for her as she studied only selected study material and revised it a number of times.

For IAS Interview, she prepared her Detailed Application Form (DAF) in a detailed manner. She prepared all the minute details related to her name, native place, profession, hobbies, and the likes. She even prepared the chemicals used in making “Kajal”.  She prepared all the probable questions which can arise from the DAF.

The ultimate mindset was not to become nervous in the IAS interview. She got 201 marks in the IAS Interview.