Institute of Banking and Personnel Selection (IBPS) is all set to conduct Common Written Examination for recruitment of Probationary Officers. 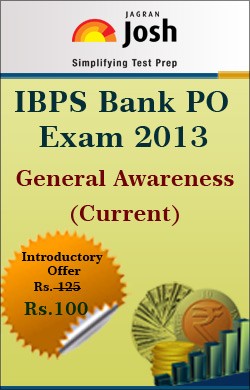 The General Awareness (GA) Section of IBPS PO Exam that will comprise 40 questions from topics like money, banking, economics, etc., is quite a challenging but can be highly scoring if prepared well. To prepare comprehensively for GA section, banking aspirant would have to have a right preparation strategy and an all-inclusive study material. Here, Jagranjosh provides a one-stop solution for it by offering “IBPS PO Exam 2013: General Awareness Study Material (E Book)”, which is a perfect blend of all the policies, programmes, latest updations in economy, important banking news, economy news and corporate affairs in  chapter-wise format.

The Union Government of India on 30 August 2013 approved denotification of Six Special Economic Zones (SEZs) projects, including one textile sector and five IT SEZs. The decision was taken during a meet of the Board of Approval (BoA) headed by Commerce Secretary SR Rao.

Air India launched its direct flights to Sydney and Melbourne on 29 August 2013, after a wide gap of 22 years. With this, Air India connected the two continents.

Reserve Bank of India on 28 August 2013 has decided to open a forex swap window to meet the entire daily dollar requirements of three public sector oil marketing companies (IOC, HPCL and BPCL). The decision was taken based on the assessment of current market conditions.
Under this Forex Swap Facility Reserve Bank will undertake sell/buy of USD-INR forex swaps for fixed tenor with the oil marketing companies through a designated bank. The swap facility gets operationalized with immediate effect and will remain in place until further notice.

The decision will help in reducing the volatility in the rupee market that has continuously fallen weak against dollar in past few months, reaching to the market value of 68.82 against US dollar.

The Gross Domestic Product (GDP) growth of India decelerated even more to 4.4 percent, the slowest rate of expansion in 4 years, i.e., since 2008 economic meltdown. The GDP growth stood at 4. 4 percent in the first quarter (April-June) of the fiscal year 2013-14. The reason for this drop is poor performance of the manufacturing as well as mining sector.

The Cabinet Committee on Investment (CCI) on 26 August 2013 cleared 36 projects worth 1.83 lakh crore rupees in power and other infrastructure sectors which were stalled on account of regulatory hurdles. The projects were cleared to boost Investment and accelerate growth in the country.

Number of Foreign Tourists in India increased in 2012

As per the data released by Ministry of Tourism on 26 August 2013, the number of foreign tourists visiting India has shown a steady increase in the past three years.