The Vinod Gupta School of Management (VGSoM), IIT Kharagpur has concluded its first phase of Final Placements for the 26th batch of its flagship MBA programme. Candidates were extended 139 job offers by more than 65 companies which also included 31 Pre-Placement Offers being extended to 123 students of the same batch.

Leading Brands on the Campus

In the first phase of placements at Vinod Gupta School of Management, an average compensation of the top 25% of the batch stood at Rs 18.5 lakh and for the top 50%, it stood at Rs 17.21 lakh. The median for placement package stood at Rs 18.94 lakh and Rs 16.76 lakh respectively. The highest domestic offer received by a candidate was of Rs 21 lakh.

In the campus placement drive conducted at IIT Kharagpur, candidates recieved offers from various sectors. Out of all the sectors, Consulting remained the preferred domain for the students on campus and maximum number of job offers were accepted in this domain followed by Analytics, Operations, Sales & Marketing, and Finance. 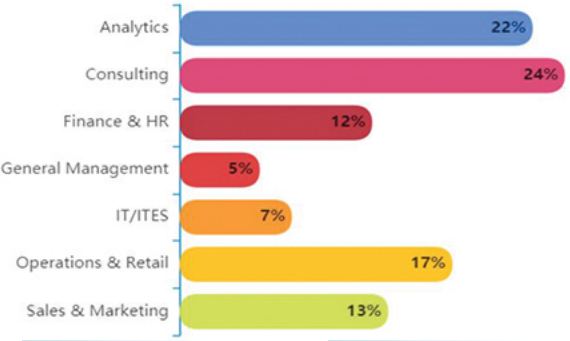 The Vinod Gupta School of Management (VGSoM) is a premier MBA institute of India which was established in 1993 at IIT Kharagpur and is the first management school that was set up within the IIT to impart management education. The institute has been named after distinguished alumnus and a Life Time Fellow of the Institute, Mr. Vinod Gupta and the MBA institute has recently (in 2018) completed 25 years of excelling in imparting the management education to the candidates around globe. The institute has ranked as one among the top 15 MBA Institutes of India that is equipped with the state-of-the-art facilities and prestigious alumni base.