RRB JE 1st Stage CBT 2019 Exam will be held from 22nd May 2019 onwards. The General Intelligence & Reasoning section of CBT 1 Exam is of 25 Marks. You can start practicing these questions and understand the problems in detail with the help of explanations given alongwith the answers in the below Quiz:

Directions (1- 5): Some groups of letters are given, all of which, except one, share a common similarity while one is different. Choose the odd one out.

Explanation: In all other pairs, second is a part of the first.

Explanation: In all other options, denominator is the numeric position of the alphabet plus 2.

Directions (6– 10): In each of the following questions, there is a certain relationship between two given words on one side of (: :) and one word is given on another side (: :) while another word is to be found from the given alternatives, having the same relation with this word as the words of the given pair bear. Choose the correct alternative.

Explanation: Study of Kidney is Nephrology and the study of brain is called Neurology.

14. Statements: All pencils are sharpeners. No sharpener is eraser. Some books are pencils.

a) Only either II or III, and IV follow

b) Only either II or IV, and III follow

c) Only either II or IV, and I follow

d) Only either II or IV follows.

Either II or IV will follow and II will definitely be true.

15. Statements: Some pigeons are eagles. All eagles are sparrows. Some sparrows are not pigeons.

Only I is definitely true.

16. Statements: Some computers are laptops. Some laptops are mobiles. Some mobiles are calculators. (Banking) 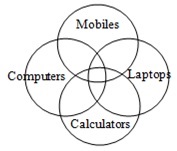 None of the statement is necessarily true.

a) At the starting point.

b) In the west

c) In the east

d) In the North West. 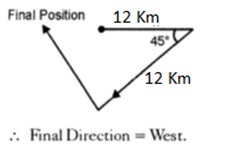 19. Ravi told Ram, “yesterday I defeated the only brother of the daughter of my grandmother”. Whom did Ravi defeat?

Directions (20 - 21): Read the following information carefully and answer the questions given below it:

d) none of these

22. Which of the options is true based on the Venn diagram below?

a) Some honest people are also hardworking and are literate

b) Illiterates are either honest or hard working

c) All literates are rural

d) No person is rural, literate, honest and hardworking

Directions (23 – 24): Read the following information carefully and answer the questions given below.

Six boys A, B, C, D, E and F are marching in a line, their positions arranged according to their heights, the tallest at the back. F is between A and B. E is shorter than D but taller than C who is taller than A. E and F have two boys between them. A is the not the shortest.

a) Between A and B

b) Between A and C

c) Between C and D

Directions (25 - 26): Answer the questions on basis of the information given below:

25. Who is sitting extreme right?

26. In which position Geeta is sitting?

a) Between Rohan and Ramesh

b) Between Rohan and Ankit

c) Between Govind and Ramesh

d) Between Ankit and Govind

Explanation (25-26):  By the information given we can have the following arrangement.

27. Which number replaces the question mark?

Explanation: Split the left and right hand circles in half, vertically.

Now, the number appearing in middle circle follows the below series:

28. Which letter replaces the question mark? 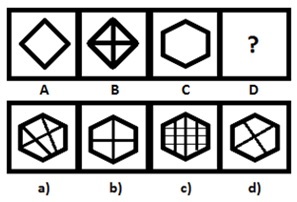 Explanation: The second figure is divided into as many parts as the number of sides of the first figure. Similarly, Fourth figure will be divided by six lines as the third figure is a hexagon. 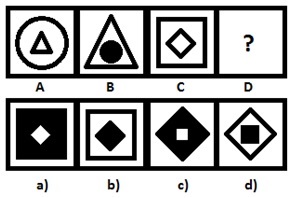 Directions (31-32): In each of the following questions, choose the correct mirror image from the alternatives (a), (b), (c) and (d), when mirror is placed on the line AB.

Directions (33-34) - Choose a figure which would most closely resemble the unfolded form of the last question figure. 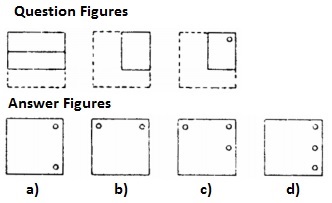 Directions (35-36): In each of the following questions, a part of question figure is missing. Find out from the given answer figures (a), (b), (c) and (d), that can replace the ‘?’ to complete the question figure.

Directions (37 - 40): Study the following arrangement carefully and answer the question given below.

37. Which of the following is the fifth to the right of the fifteenth from the right end?

Explanation: The fifteenth element from the right end of the arrangement is B, and the fifth element to the right of B is M.

38. If order of the last eleven elements is reversed, which of the following will be seventh to the right of ninth from the left end?

The ninth element from the left end of this arrangement is F, and the seventh element to the right of F is 7.

39. Four of the following five are alike in a certain way on the basis of the above arrangement and hence form a group. Which one does not belong to that group?

Explanation: In all other groups, the first and second elements each move 2 steps forward to give the second and third elements respectively.

Explanation: Such symbols in the new arrangement may be indicated as follow:

Directions (41-45): Choose the next number in the series from the options below:

Directions (46-47): In each of the following letter series, some of the letters are missing which are given in that order as one of the alternatives below it. Choose the correct alternative.

Explanation: The series is aba/aba/aba/aba. Thus, the pattern ‘aba’ is repeated.

Directions (48 – 50): Find the word which cannot be made from letters of the given word.