In this article you will get CBSE Class 10 Mathematics chapter 3, Pair of Linear Equations in Two Variables: NCERT Exemplar Problems and Solutions (Part-IIIB). Every question has been provided with a detailed solution. All the questions given in this article are very important to prepare for CBSE Class 10 Board Exam 2017-2018. 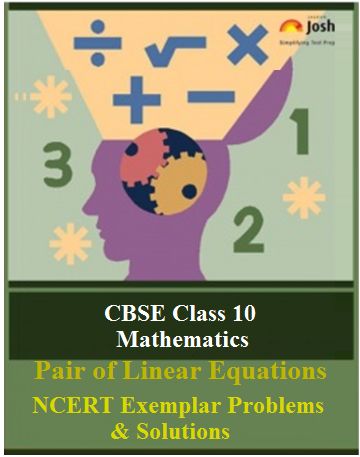 Find below the NCERT Exemplar problems and their solutions for Class 10 Mathematics Chapter, Pair of Linear Equations in Two Variables:

Quesntion12. Draw the graph of the pair of equations 2x + y = 4 and 2x - y = 4. Write the vertices of the triangle formed by these Lines and the Y-axis, find the area of this triangle?

Plotting graph for 2x + y = 4 and 2x - y = 4, using the respective points given in above two tables, we get two lines AB and CB respectively, both intersecting at B.

Quesntion13. Write an equation of a line passing through the point representing solution of the pair of linear equations x + y = 2 and 2x - y = 1, How many such lines can we find? 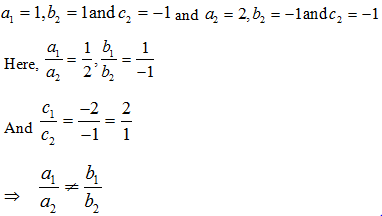 So, the pair of equations has a unique solution. 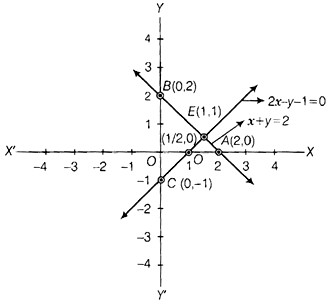 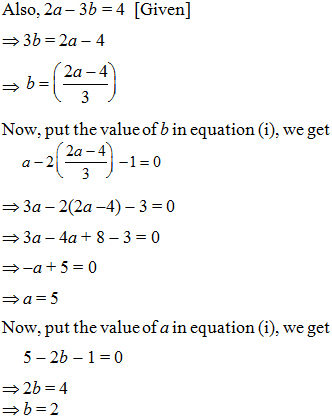 Hence, the required values of a and b are 5 and 2, respectively.

Quesntion15. If the angles of a triangle are x, y and 40° and the difference between the two angles x and y is 30°. Then, find the value of x and y.

Given, x, y and 40° are the measure of interior angles of a triangle.

On adding equations (i) and (ii), we get

Quesntion16. Two years ago, Salim was thrice as old as his daughter and six years Later, he will be four year older than twice her age. How old are they now?

Let the present ago of Salim be x years.

And the present age of his daughter be y years.

According to the question, we have

According to the second condition given in question, we have:

On subtracting equation (i) from (ii), we get

Put the value of y in equation (ii), we get

And present age of his daughter = 14 yr

Let the present age of father be  x year

And sum of the ages of his two children be y year.

According to the first condition, we have

Using the second condition given in question, we have:

On putting the value of y from (ii) in equatoion (i) we get:

Quesntion18. Two numbers are in the ratio 5:6. If 8 is subtracted from each of the numbers, the ratio becomes 4:5, then find the numbers. 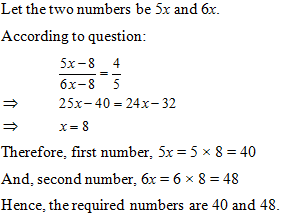 Let the number of students in hall A be x.

And the number of students in hall B be y.

By the first condition given in question, we get:

Hence, the number of students in hall A and B are 100 and 80 respectively .

Let Latika takes a fixed charge for the first two day be Rs. x and additional charge for each day thereafter be Rs. y.

And by second condition,

On putting the value of y in eqaution (ii), we get

And the additional charges after 2 days = Rs.3 per day

Quesntion21. In a competitive examination, 1 mark is awarded for each correct answer. while 1/2 mark is deducted for every wrong answer. Jayanti answered 120 questions and got 90 marks. How many questions did she answer correctly?

Then, by given condition, 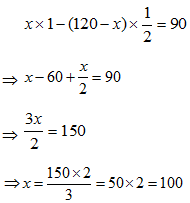 Find x and y and hence the values of the four angles.

The sum of opposite angles of a cyclic cyclic quadrilateral is 180°.