Find NCERT Solutions for Class 12 Biology – Chapter 6, Molecular Basis of Inheritance. Here, you will find solutions to all the questions of this chapter. You can also download these solutions in PDF format. NCERT textbook and NCERT Solutions are important for CBSE Class 12 board exams as well as medical entrance exams.

NCERT Solutions for Class 12 Biology – Chapter 6, Molecular Basis of Inheritance are available here. You can also download these NCERT Solutions in PDF format with the help of download link given at the end of this article. Some important topics of this chapter are DNA, the search for genetic material, RNA world, replication, transcription, genetic code, translation, regulation of gene expression, human genome project, DNA fingerprinting. At the end of the chapter, you will 14 questions and most of the questions are based on these topics.

Among the list listed above, Adenine, Thymine, Uracil and cytosine are nitrogenous bases. Cytidine and Guanine are nucleosides.

Question2. If a double stranded DNA has 20 per cent of cytosine, calculate the per cent of adenine in the DNA.

Taking total number of nitrogenous base to be 100 then number of cytosine will be 20. By base pairing rule we know in DNA segments a cytosine make pairs with a guanine by 3-H bonds. So, the no. of guanine will also 20. After 20 to cytosine and 20 to guanine, 60 are left. We know adenine and thymine pairs among themselves through 2-H bonds. So, 60 will be divided among adenine and guanine equally (60? 2) = 30%. By the above calculation, it is clear that adenine amount would be 30%.

Question3. If the sequence of one strand of DNA is written as follows:

Write down the sequence of complementary strand in 5′→3′ direction.

Question 4. If the sequence of the coding strand in a transcription unit is written as follows:

DNA is the predominant genetic material which has got many properties to suggest its role as genetic material. DNA can replicate, structurally and chemically DNA is stable and there is scope for mutation and evolution. Watson and Crick proposed the double helical structure of DNA. They have also suggested the semi-conservative made for replication process, the DNA strands uncoil and both the strands acts as a template for synthesis of new complementary strand. By the end of replication process, each daughter DNA has one parental strand and one newly synthesized strand. That’s why this mode of replication is also termed semi-conservative replication.

(a) DNA polymerases: It is a DNA dependent enzyme, along with additional enzymes. It catalyzes the polymerisation of deoxynucleotides by using DNA template. This enzyme can catalyze polymerization only in one direction from 5` to 3`.

(b) RNA polymerase: This enzyme can catalyse polymeration of RNA.

Question7. How did Hershey and Chase differentiate between DNA and protein in their experiment while proving that DNA is the genetic material?

In 1952, Hershey and Chase worked to prove that DNA is the genetic material but not proteins. They worked with bacteriophage T2 which attacks bacterium E.Coli. The phage particles were prepared by the use of radio isotopes os 35S and 32P by the following steps

(a) Few bacteriophages were grown in bacteria containing 35S. 35S was incorporated into cysteine and methionine acids of proteins and this a.acids with S formed the proteins of Phage.

(b) Similarly some bacteriophages were grown in bacteria having 32P was restricted to DNA of phage particles. These two prepared radioactive phages were allowed to infect the culture of E.Coli.

Then protein coats were separated from bacterial cell wall by shaking and centrifugation. 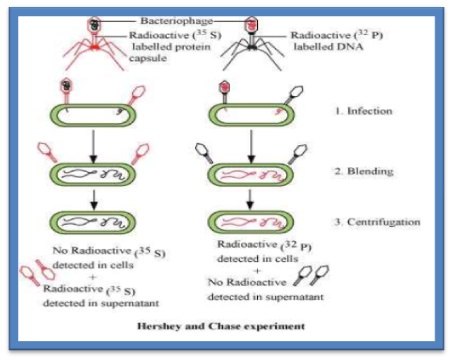 Question8. Differentiate between the followings:

(a) Repetitive DNA and Satellite DNA

(b) mRNA and tRNA

The process of polymerization of a.acids to form polypeptides is called translation. Ribosomal RNA and ribosome are an important part of translation. It can be said ribosome is the cellular factory for protein synthesis. Ribosome consists of structural RNAs and around 80 different proteins. RNA consist of two units a large subunit and a small subunit. For initiating translation, the ribosome binds to the mRNA at the start codon. Then ribosome proceeds to the elongation phase by adding the a.acids to polypeptide chain. During this phase, ribosomes move from codon to codon along the mRNA. A.acids is added one by one. They are translated into polypeptide sequence dictated by DNA and represented by mRNA. In the end, on encounter of stop codon the process of translation terminates and both the subunits of ribosomes detach. So, ribosome is essential in translation and also acts as a catalyst in this process.

Question10. In the medium where E. coli was growing, lactose was added, which induced the lac operon. Then, why does lac operon shut down some time after addition of lactose in the medium?

When a polycistronic structural gene is regulated by a common promoter and regulatory genes, then the whole unit is called an operon. It was explained by Francis Jacon and Jacque Monod in 1961. It was found that when sugar lactose was added to E.coli cultures it induces synthesis of three enzymes which is required for degradation of lactose into glucose and galactose. These are beta-galactose, permease and transacetylase and the process is called induction and enzymes as inducible enzymes.

In lac operon, when lactose is added, it enters the cell with the help of permease, a small amount of which is already present in cell. Lactose binds itself to active repressor and changes its structure. The repressor now fails to bind the operator and then the RNA polymerase starts transcription of opron by binding to promoter site P. All three enzymes for lactose metabolism are synthezised. Finallyall the lactose molecules are used up. After some time the whole lactose is used up and there is no inducer present to bind the repressor. The repressor becomes active again, attaches itself to operator and switches off the operon. 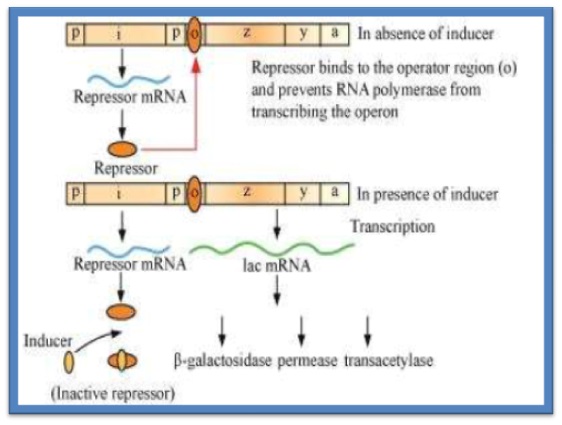 Question11. Explain (in one or two lines) the function of the followings:

(a) Promoter: Promoter gene marks the site at which transcription of mRNA starts and where RNA polymerase enzyme binds.

(b) tRNA : It helps in protein synthesis. It brings the a.aids and reads the genetic code.

(c) Exons : Exons are those sequences which appear in mature RNA.

In eukaryotes, monocistronic structural genes have interrupted coding sequences or eukaryotic genes are split genes, the codingsequence are called exons.

Question12. Why is the Human Genome project called a mega project?

Human Genome project called a mega project because to sequence every base pair in human genome was its specific goal. This project took approx 13 yrs and achieved in 2006. Its main aim was to develop new technology and generate new information in genomic studies. Because of this project, many new areas have opened in genetics, bio-tech. and medical sciences.

Question13. What is DNA fingerprinting? Mention its application.

DNA is a quick method of to compare the DNA sequences of any two individuals.

DNA fingerprinting is mostly used in forensic science and other than this it is also used in determining population and genetic diversity.

(a) Transcription: The process of copying genetic information from one strand of DNA into RNA is called transcription.

(b) Polymorphism: It brings revolution in the process of finding location on chromosomal for disease-associated sequences and tracing human history.

(c) Translation: The process that requires transfer of genetic information from a polymer of nucleotides to a polymer of a.acids to form a polypeptide.

(d) Bioinformatics: Bioinformatics is a new and very effective area in the field of biology. Knowledge from the DNA sequence will help research through the coming decides leading to understanding biological system.